St. Albert students get hands on with the trades and sustainability at Skills Exploration Days.
Jan 25, 2019 9:28 AM By: Kevin Ma 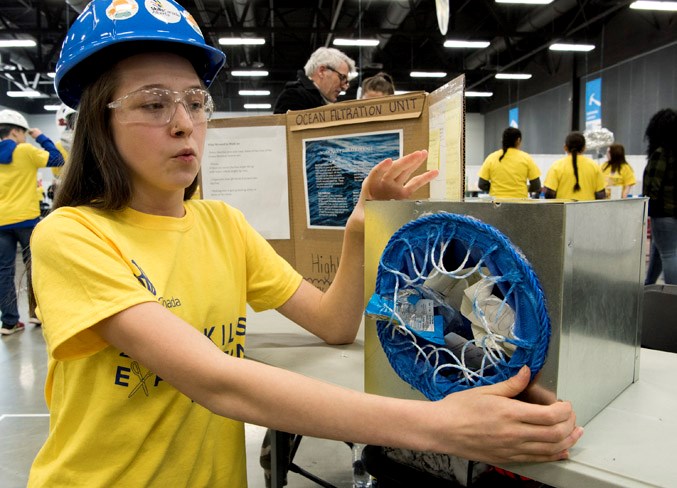 OCEAN FILTER – McKenzie Anderson discusses the ocean filtration unit she and her teammates from Highland School built during Skills Exploration Days at the Edmonton Expo Centre this week. She is one of about 400 students who spent a day learning about the trades industry and applying their skills to produce a device that would make the world more sustainable.

W.D. Cuts students put their Skills to work this week to build ideas that could help save the planet.

About 400 junior high students from across Northern Alberta were at the Edmonton Expo Centre Jan. 22 and 23 for the annual Skills Exploration Days event, organized by Skills Canada Alberta.

The event was meant to get youths interested in the trades by giving them hands-on experience with welding, plumbing, textiles, carpentry, electronics and graphic design, said Skills Canada Alberta spokesperson Victoria Anderson. Many of them will explore those trades further through high-school option classes.

The event challenged students to design and build a device in just 2.5 hours that would address a real-world issue. This year, they had to make something that would encourage sustainability and responsible consumption.

Anderson said this year's students built model vertical farms, mini-composters and artificial photosynthesis machines that could capture CO2 out of cardboard, paper, wood, pipes and sheet metal as part of the event. Others looked to fuel cars using landfill gas, harvest crops with robots or tap thunderstorms for electricity.

“These are the minds that are going to change the world,” Anderson said of the students.

“When you get these students in this room, the imagination and the creativity they have is amazing.”

W.D. Cuts teacher Deborah Rivet brought four squads from her Mad Science option class to the event. The students spent several classes earlier this month designing their devices, and learned much about teamwork, problem solving, science, engineering, technology and math in the process.

“It was a hard concept for them,” Rivet said of this year’s theme, and some groups had a tough time coming up with an idea.

W.D. Cuts student Cole Van Wyk helped design an “Easy Planter,” which was a mock-up of a stackable self-watering planter made of wood and sheet metal.

“It allows people to grow their own food in their house,” he explained, which reduces the amount of land needed for agriculture, addresses food shortages and improves air quality.

“A lot of people litter,” she explained, so she and her team proposed to build a gigantic fan mounted to a crane that could suck up trash (but not people) for disposal and clean up vast areas at once.

Pretty said this system would move from block to block as it worked, and was best suited for small towns – it would take a long time to clean up Edmonton with it.

McKenzie Anderson over at Edmonton’s Highland School helped design a floating filter box that would catch ocean debris. These boxes could either be collected by ships or left to drift to shore, whereupon whoever found them could sell or recycle their contents.

“Obviously there’s some kinks we’re trying work out,” she said – they don’t know if their metal mock-up would float, for example, or how much waste would fit in it.

While she wasn’t sure what it would take to make this project a reality, she said today’s youth would have to step up and take ownership of the world if they were to solve issues like ocean pollution and climate change.

“It’s going to take a lot of simple ideas like this one for someone to actually be like, ‘Oh, we can stop all this waste from going into the ocean (with that),’ ” she said.

She and Van Wyk said they liked learning about different trades at this event, many of which teens their age would not normally get to try.