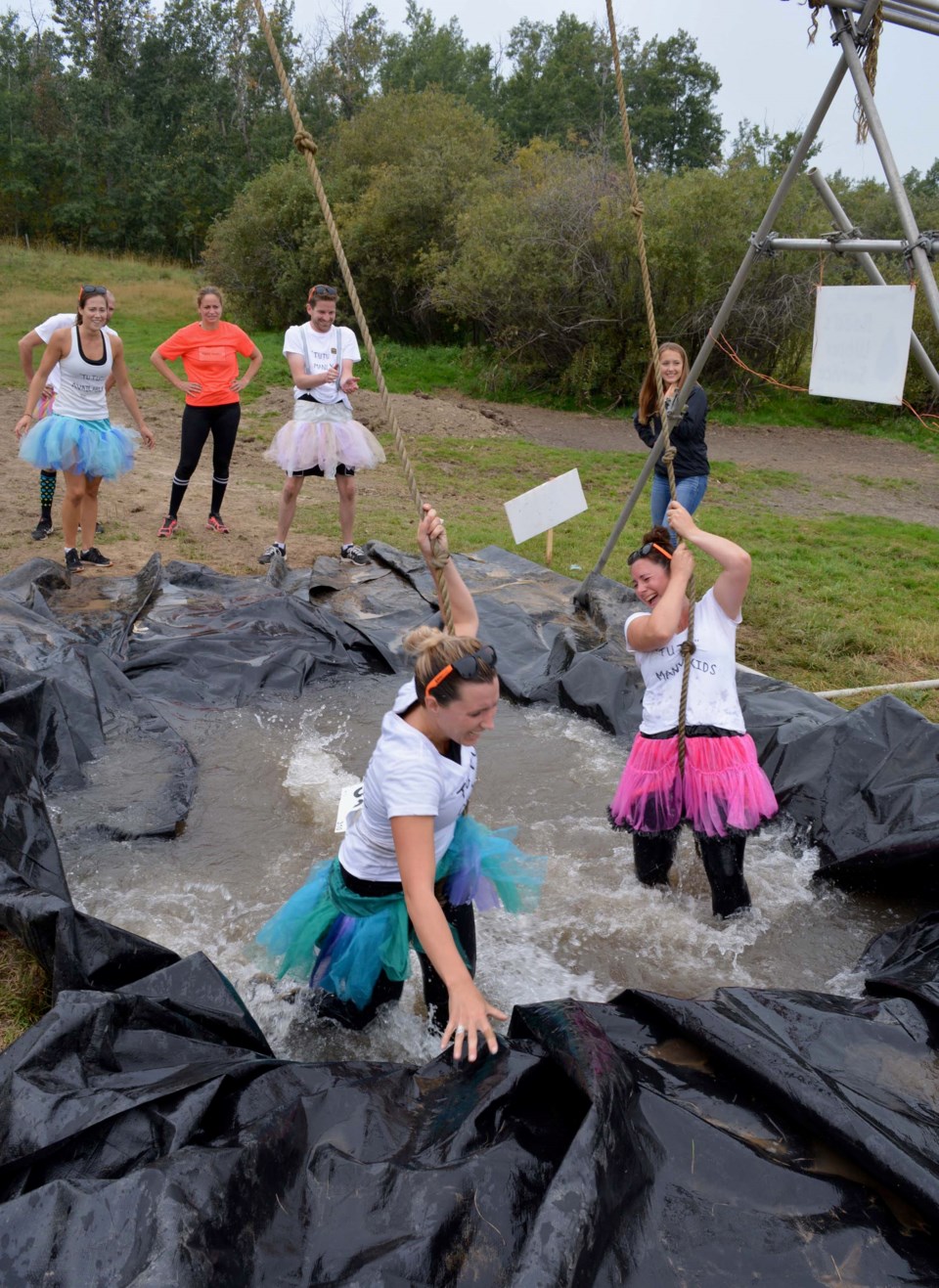 SERIOUS (?) COMPETITION — This tutu-themed team attempts to swing across a watery pit during the 2017 West Country Hearth Attack race. This year's race will feature many all-new obstacles at the Inland Aggregates gravel mine and, in all likelihood, other silly race outfits.

Sturgeon County’s Hearth Attack race is back, and this time, thanks to a local gravel company, it’s literally the pits.

About 400 people are expected to sprint, swing, crawl and climb through an obstacle-filled gravel pit on Sept. 7 as part of the fifth annual West Country Hearth Attack race.

The race is a charity obstacle course run that in four years has raised some $140,000 for the West Country Hearth seniors’ complex in Villeneuve, said race co-organizer Chris Moore.

The race has historically been run on an 80-acre back-country site near Calahoo, but was not held last year because the organizers decided to take a break, Moore said. This year, Dale Soetaert of Inland Aggregates offered to host the race at the company’s 600-acre sand and gravel mine near Villeneuve.

Soetaert said he made the offer because his family has close ties to Villeneuve and West Country Hearth, which his dad Victor helped develop and build.

“It’s a place near and dear to all of our hearts where seniors in the community can stay close to home.”

Moore said he’s designed an all-new course for this year’s race, one that would be slightly longer than the old one at 6.5 km and have over 20 challenging obstacles.

Expect to get a whirlwind tour of Inland’s gravel operation as you sprint through old and reclaimed parts of the mine past and over giant piles of rock, Soetaert said.

“We’re going to hurdle over concrete pipes we make,” he said, and scale a 170-foot mountain of sand, the peak of which will give you a photogenic view of downtown Edmonton.

Moore was coy about some of the other obstacles, but said previous races have seen runners scale walls and hay bales, swing over ponds, sprint across foam lily pads, and shoot arrows at targets. Anyone who fails to overcome an obstacle can either do 20 burpees (a cross between a jumping-jack and a push-up) or donate $5 to West Country Hearth.

St. Albert resident Jennifer Bruinsma said she’d be back for her fifth Hearth Attack this fall, as would many of her friends. She said she has been working out and playing soccer to prepare.

“It’s a challenging course that’s good for all fitness levels,” she said of the race, and all proceeds from it go to a good cause.

The race is open to anyone 14 or older and has a $50 entry fee, with each racer expected to raise at least another $50, Moore said. (You get your fee back if you raise over $250.) All proceeds go to West Country Hearth.

The race is timed and has prizes for the fastest runners, Moore said – the best time in 2017 was 35:13. Many participants race for fun, helping each other through obstacles often while dressed in matching costumes. You also get a free drink at the finish line, which for many racers means a beer.