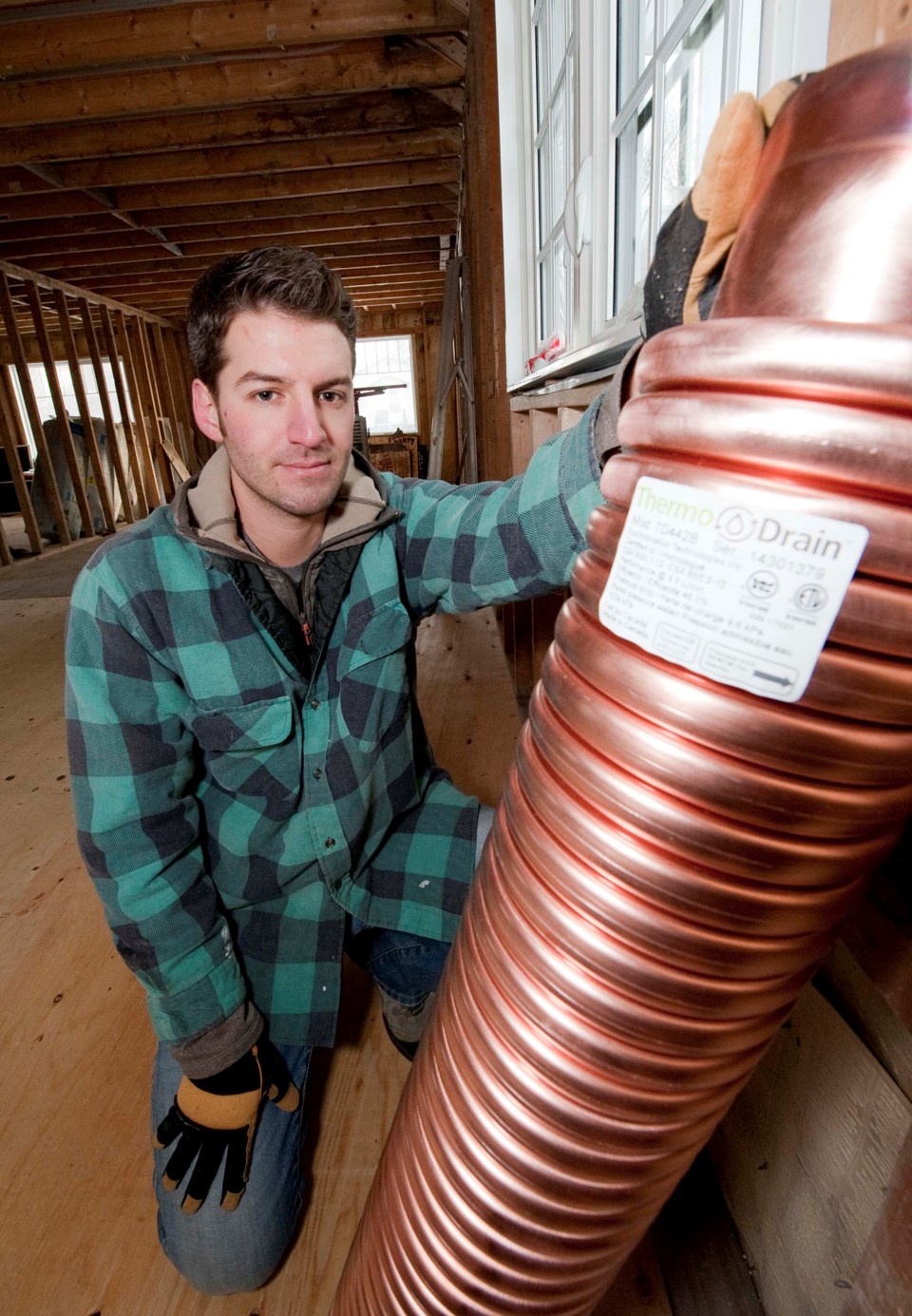 DISCOUNT TECH — St. Albert council voted this month to start work on a proposed Home Energy Retrofit Accelerator (HERA) program similar to one run by Edmonton. The program, if approved, would offer cash rebates for energy efficiency retrofits such as the one shown here by former St. Albert resident Stuart Fix. The drain heat recovery system he is holding would earn him a $300 rebate under Edmonton's HERA program. KEVIN MA/St. Albert Gazette

St. Albert’s mayor says her city should give residents grants to green their homes in order to draw jobs and international investment.

The City of Edmonton introduced its HERA program on Jan. 13. The grant offered residents rebates for making certain energy-saving upgrades to their homes.

In an interview, Heron said she had received many calls from residents in the last few years asking if the city could give grants to help them install solar panels or other energy-saving devices in their homes. Edmonton’s HERA program seemed to be just what St. Albert residents would be interested in.

“This is an opportunity for a municipality to encourage these kind of energy improvements on homes.”

The move follows on the city’s recent decision to start work on a Clean Energy Improvement Program (CEIP) bylaw which aims to encourage home energy retrofits by letting residents pay for them through their taxes over time instead of all at once up front.

Edmonton’s HERA program is one of the many steps the city has taken to reduce greenhouse gas emissions and prevent more than 1.5 C of global heating as per the Paris Agreement, said Lisa Dockman, energy transition project manager for the City of Edmonton. The city also offers grants for commercial building retrofits and solar panels and published guides on how to reduce greenhouse gases at home.

“Buildings are just a huge, huge part of what makes up greenhouse gas emissions,” Dockman said, with commercial and residential buildings accounting for about 40 per cent of Edmonton’s carbon footprint.

Edmonton has allocated $1.8 million to its HERA program over three years and thus far has issued about 200 grants through it, Dockman said.

Under HERA, participants do an EnerGuide home energy efficiency evaluation to identify the most cost-effective improvements they could make to their home. Different actions qualify for different rebates: installing a triple-pane window is worth $50, for example, while re-insulating outer walls is worth up to $2,500. Owners get a 20-per-cent bonus if they do at least three improvements in 18 months and up to $10,000 extra if they get their home to net-zero energy use.

Dockman said most homeowners would likely qualify for about $1,500 in rebates, though someone who reaches net zero could get $20,000. Making these improvements would also lower their energy bills and make their homes more quiet, comfortable and valuable.

“We know financing is a major barrier to home energy retrofits,” Dockman said, and grants and CEIP both help lower that barrier.

“When you start talking about grants and incentives, people’s ears perk up.”

Dockman said St. Albert had great timing with its move to start a grant program, as the federal government’s $5,000 Greener Homes energy retrofit grant is also set to roll out later this year. Said grant, like HERA, also requires an EnerGuide home evaluation.

Dockman said Edmonton’s HERA program is projected to prompt some $15 million of investment into the city’s economy and prevent 25,951 tonnes of greenhouse gas emissions (about three per cent of St. Albert’s total carbon footprint) over three years.

“Building renovations and home renovations are intensely local,” she added, and would create many local jobs.

Heron said St. Albert’s HERA program would likely be a copy of Edmonton’s with a smaller budget of maybe $150,000.

“We are going to be taking some pretty tight budgets in the upcoming years,” Heron noted, and it would be up to the next council to decide if HERA is worth that money.

“This is one way we can show our commitment to (act on) climate change.”