He's been the personal pilot for Queen Elizabeth, Prince Charles and Princess Diana, and was once one of the top men in the Canadian air force. Now, St. Albert's own brigadier-general has received a new honour for his second career as a volunteer.
May 3, 2017 12:00 AM By: Kevin Ma 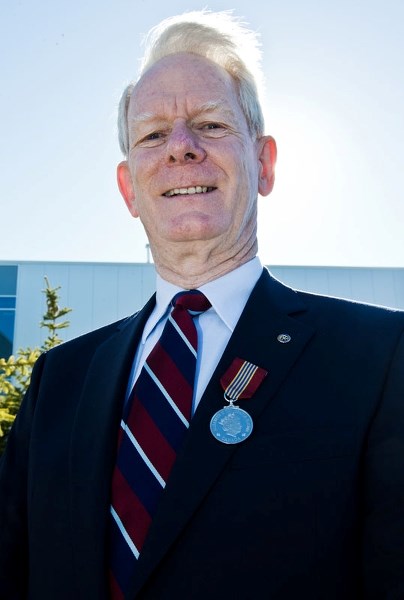 He's been the personal pilot for Queen Elizabeth, Prince Charles and Princess Diana, and was once one of the top men in the Canadian air force.

Now, St. Albert's own brigadier-general has received a new honour for his second career as a volunteer.

Retired brigadier-general Bill Buckham of St. Albert was one of 46 people to receive the Sovereign's Medal for Volunteers in Ottawa last April 24 from Governor General David Johnston.

The medal recognizes Canadian citizens who make significant, sustained and unpaid contributions to their community, and is the only medal for volunteerism given out by the governor general.

It was humbling to be there at Rideau Hall with so many other volunteers from all walks of life, Buckham said.

"I think being a volunteer does make you humble."

Buckham is the former commander of what used to be the Namao air base (now CFB Edmonton) and flew all kinds of airplanes in his career, said Rod Macleod, president of the Alberta Aviation Museum.

Buckham is someone who puts all his energy into his volunteer efforts and has been a vital help to many organizations, Macleod said.

"I can't think of anybody that deserves (this medal) more."

Buckham, 78, said he's known he wanted to become a pilot since he was a kid watching planes at the Vancouver airport with his dad. Starting with air cadets, he got his wings and joined the Royal Canadian Air Force as a reserve pilot in university, and was soon flying transports and helicopters around the world.

Buckham spent a number of years with the 412 Transport Squadron, which provides flights for all VIPs in Canada. Amongst his passengers were Prince Andrew, Prince Charles and Princess Diana, and, in 1984, Queen Elizabeth and Prince Phillip.

"It is an interesting challenge," he said of flying the royals, as they have tight schedules and very fancy meal plans.

"You make sure everything is polished and clean."

Buckham said he put in about 8,000 hours in the air during his career, flying everything from the Casablanca-style DC-3 to the hulking C-130 Hercules.

Promoted brigadier-general (making him one of just 23 Air Force generals in Canada at the time), Buckham served as vice-president of training for the RCAF and oversaw thousands of officials.

"Edmonton was a big airbase when I was here," he said, with five squadrons based out of the Namao airport.

"People younger than I am forget there was an air force here, and that we were very critical to the development of Alberta."

Post-retirement, Buckham settled in St. Albert and decided to become a volunteer instead of pursuing a second career.

"There's an infinite variety of things you can do," he said of volunteerism, and you get to work with like-minded people.

Among the many groups Buckham has volunteered with over the years are the Air Cadets, the Rotary Club, the Alberta Aviation Museum and the Last Post Fund, which supports the funerals of destitute veterans.

He was also president of the Griesbach RCAF Commemorative Society, which recently unveiled the Ad Astra monument in north Edmonton. The monument serves as a permanent reminder of the Air Force's history in Edmonton and its role in Northern Canada.

While he did plan to ease up a bit, Buckham said he was still doing about 10 hours a week of volunteer work. He encouraged others to give back to their community however they could – even a half-hour a week helps.

gg.ca has the full list of recipients under its news releases section.

The Medal for Volunteers consists of a silver circular medal with the Queen's head on one side. The obverse shows two interlaced hearts, representing caring and generosity, and a sunburst pattern, symbolizing the time given by volunteers. The ribbon uses the viceregal colours of blue and gold, and has five gold stripes to represent the hand present in the Caring Canadian Award emblem. The deep red represents royalty.
Source: Governor General of Canada