High-rises in St. Albert? What you need to know before the Riverbank Landing public hearing

St. Albertans get their chance to make their voices heard on June 22

Next week’s public hearing will give St. Albert residents a chance to make their voices heard on Boudreau Developments' Riverbank Landing proposal, which could see two of the city’s tallest towers rising next to the Sturgeon River.

The proposal would construct around 500 residential units to house approximately 800 people, with office space, restaurants, retail and healthcare services spread across the six buildings. It would be built in three phases over seven to nine years.

The vision is to build a walkable urban sprawl with two 26-storey residential towers at its centre. The site is bounded by Boudreau’s two Botanica residential buildings, currently at 80 per cent capacity, and the Shops at Boudreau. The four-hectare parcel was the former site of Hole’s Greenhouses on Bellerose Drive, just northeast of Boudreau Road.

The construction phase would create 175 labour and 95 service jobs per year, according to Boudreau Developments.

The site has the potential for 55 healthcare and professional service providers. The project aims to add $249 million to the local GDP and would provide $2,680,954 in new property taxes annually. Boudreau plans to invest $500 million into the project.

Though never originally intended to house a high-density residential development of this magnitude, adding two high-rises and four buildings to the site has residents concerned as to how the area will handle additional traffic, shadowing and environmental impacts.

The public hearing is set for June 22 at 9 a.m. before city council decides on whether to allow key changes to the Oakmont area structure plan (ASP) and land use bylaw to accommodate the mixed-use development.

With this meeting being conducted over Zoom, the deadline to submit written responses is 12 p.m. Wednesday (June 17) to . Those who want to speak must register no later than 12 p.m. Friday (June 19). The public hearing will be live-streamed on YouTube.

On Monday, Coun. Sheena Hughes said around 30 people are registered to speak in what's expected to be a "controversial" public hearing.

"To many people, this will be a stressful and important day," Hughes said. "This is probably the most emotional project that we will be facing ... I don't think we've had 30 people lined up to speak before in this term."

Coun. Ray Watkins said he will be listening to all perspectives. Coun. Natalie Joly said she would also be entering with an "open mind."

Coun. Ken MacKay said on June 12 he had received more than 170 written emails around the development, the most emails on any topic he has ever received. But above all, he said he will respect the process and hear all sides.

"I really want to make sure I'm able to listen with an open mind and make a decision based on that," he said.

With first and second readings done, Mayor Cathy Heron said she "cannot speak to anyone about this outside of the public hearing" in an email to the Gazette.

Coun. Wes Brodhead noted he'll probably be losing a few hours of sleep over the decision, and is prepared to listen to all sides of the issue.

"There's a reason why we settled here, my wife and I, 40 years ago. We want to support and enhance the beauty of the community in which we live, and balance that against the very real reality that St. Albert is not just a little village anymore. We are in fact a significant city in the province of Alberta," he said.

Coun. Jacquie Hansen was not available to comment before press time.

If council approves the zoning amendments, construction could start in the spring, according to Boudreau Developments. 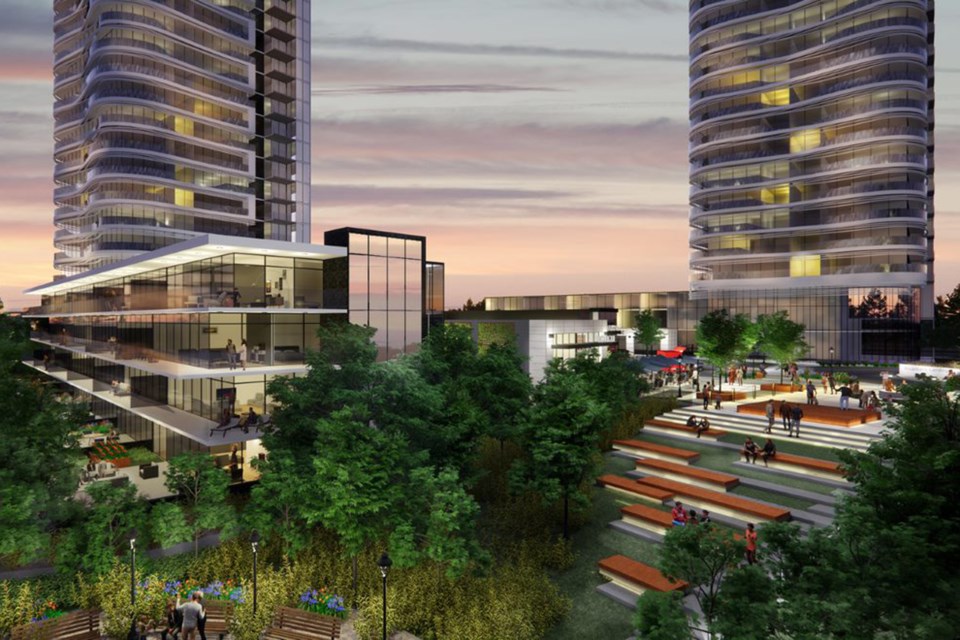 On June 12, approximately 23 people lined the streets of Bellerose Drive in an organized demonstration against the development – the second of its kind – holding up signs reading ‘Say No To Mega Towers’ and ‘Your Voice Matters.’

Doug Hartman, a 29-year resident of St. Albert, stood on the sidewalk next to the only entrance into the development on Bellerose Drive, his hand cupped behind one ear as cars flying past honked in support.

Calling the demonstration a “true grassroots organization,” Hartman said he and others believe the "monstrous" high-rise proposal as it stands is not acceptable in an already developed neighbourhood.

“Maybe (the proposal) could be put elsewhere in St. Albert where there is actually room for it, where’s there’s accessible traffic patterns and mass transit nearby. Not up against a developed neighbourhood that’s already been zoned for low-density residential,” Hartman said.

It can take St. Albert resident Sandy Clark 45 minutes to get through the Bellerose and Boudreau intersection. Clark said she agrees with more development and densification in St. Albert, but city planning needs to be there first.

"I hope city council recognizes the area structure plan and the land use bylaw need to be left the way it is. Who in St. Albert can rely on governments if they take a piece of property like this and change the land use so significantly that you don't even recognize it?"

Other residents are in favour of Boudreau's proposal.

Ed Kohel moved into a Botanica apartment with his wife in March after living in neighbouring Oakmont for five years.

It's been smooth sailing so far – Kohel and his wife are considering getting rid of one of their vehicles because of how many services are within walking distance.

"No doubt about it, in five years from now, traffic is going to change immensely on how people will go to work, or if they even leave their condos to go to work. So, is St. Albert going to be ahead of the curve?" he said.

Kohel said he sees the proposed development as being very progressive, not only for the additional tax revenue to offset policing, firefighting and parks maintenance, but also as a way to address the need for more diverse housing and tax revenue in the city.

"St. Albert is moving in a direction that is very appealing to a large mass of people, especially when you look at a development like this (to) help all residents of St. Albert with a tax base. Plus, it's going to be a nice little hub for people who want to experience that kind of lifestyle." 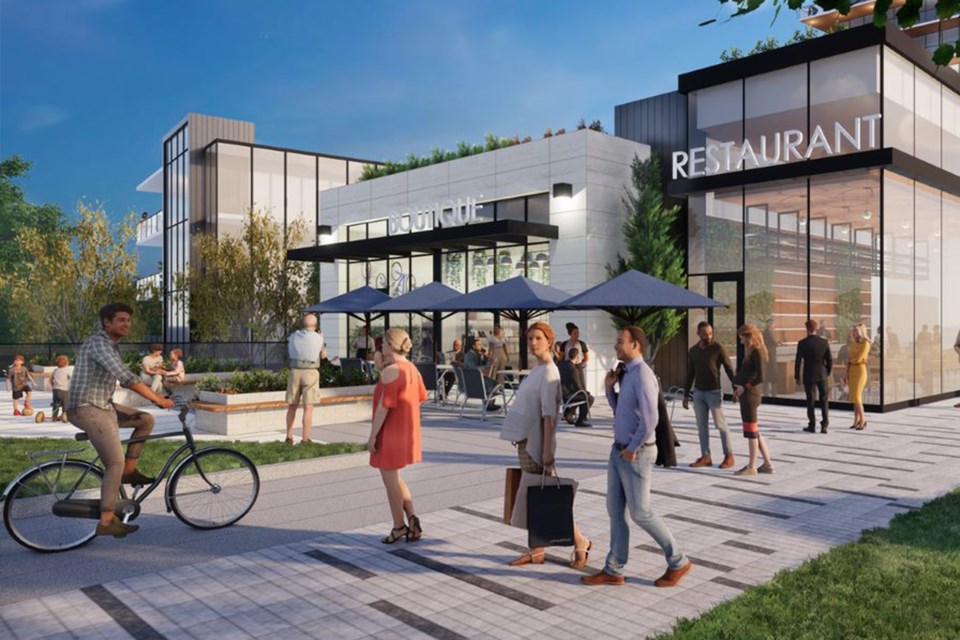 Going into the public hearing, Boudreau Developments president Dave Haut said they will take the time to address "rumours" around the project and present updated information on the shadow study and traffic plans designed around a peer-reviewed study.

After hearing pushback from residents, Boudreau made some alterations to its proposal to make both towers 26 storeys, and reduce the height of a proposed senior's residence from 11 storeys to nine.

One of the towers was relocated to the centre of the property, away from the previous position next to Orchard Court. The public square has also been moved. A second access point was added to the northeast corner onto Bellerose Drive.

Having a left-hand exiting turn across two lanes of traffic onto Boudreau would cause "friction" there, Haut said. Plans for roundabouts were not supported by the city because it would be too close to traffic lights.

One of the big problems with the Boudreau/Bellerose intersection is the left-hand turn onto Boudreau Road. Traffic can back up right up past the lights to Evergreen Drive, restricting traffic going straight through.

A longer queuing lane and a straight-through or left-turn lane will double the turning capacity, Haut said.

"It doesn't make any sense to do a development where the traffic doesn't flow. The traffic has to work – we're confident in this plan."

On June 8, the City of St. Albert issued a request for proposals from consulting firms to design improvements at the intersection of Boudreau Road at Bellerose Drive, a "high collision" occurrence location with increased traffic and pedestrian demands, which could be further exacerbated by the development. Applications are being accepted until July 8.

Haut said making the high-rises skinnier and taller would allow for more green space while meeting the balance of having enough residents living there to support the commercial side.

"We've worked very hard on this balance, and we've made some concessions," he said. "Dropping it much more will get really tricky ... it's not something we really wanted to do today, for sure."

Located 50 feet away from the Sturgeon River, Boudreau has hired an environmental consultant to do a review on the site and development plans.

Wildlife corridors are now part of the design, and the developer is working on incorporating other recommendations. For example, stormwater could be retained on-site and filtered before it goes into the drainage system to avoid effects on fish populations.

Fencing will be up during construction to block any construction debris from spilling in, and the mature trees around the perimeter of the site will "stay as much as possible," Haut said.

When asked why Boudreau chose the Riverbank Landing location instead of elsewhere in the city, Haut said he believes it is the only site capable of incorporating both retail and residential successfully.

"Given the size of it, the complementary uses that are already developed adjacent to the river, on two major arterial roads in St. Albert, really create this unique opportunity." 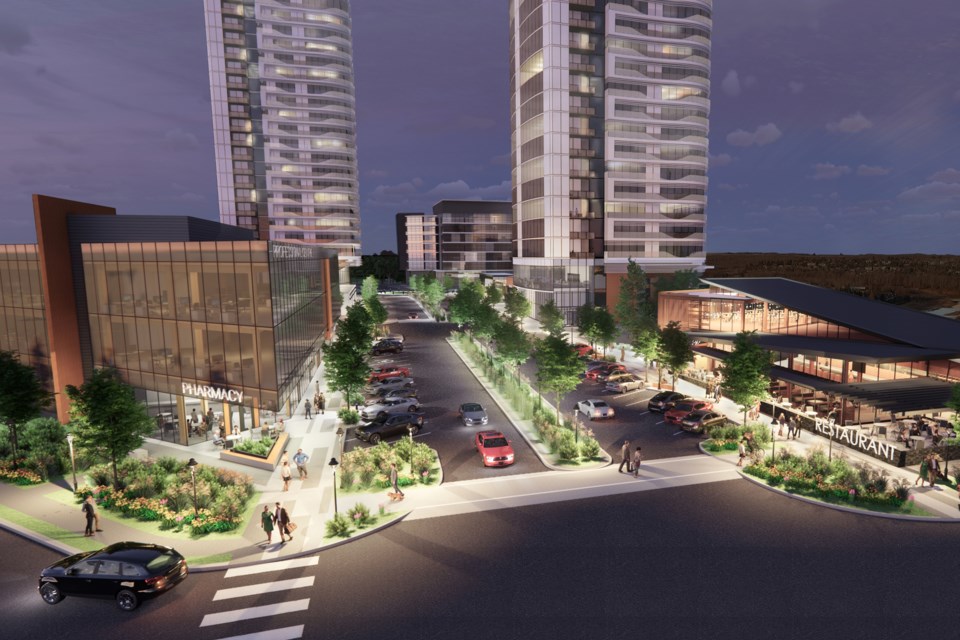 An artist rendering of Boudreau Development's Riverbank Landing proposal from the east. SUBMITTED 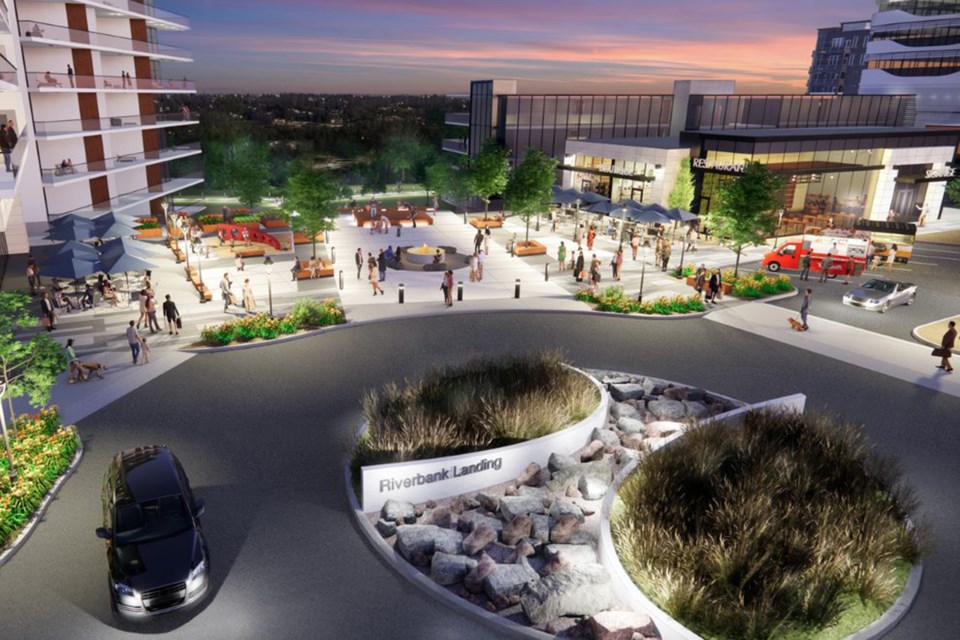