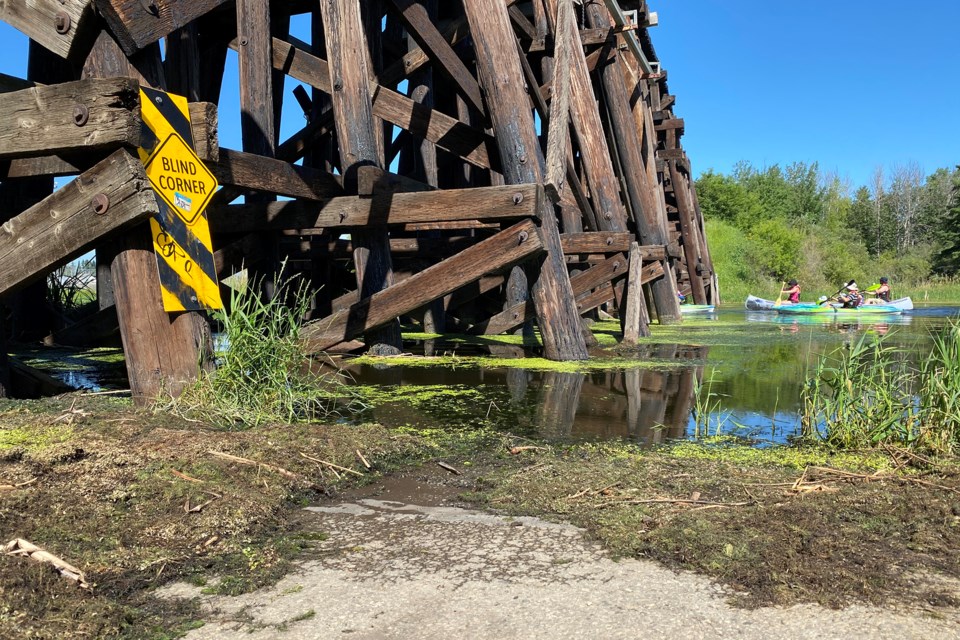 Kayakers take advantage of the high levels on the Sturgeon River. On July 16, the river rose to 2.3 metres before gradually dropping back down to around 2.1 metres on Tuesday. CHRIS COLBOURNE/St. Albert Gazette

Excessive rainfall and retention is driving up water levels on the Sturgeon River for the second year in a row.

City staff continue to monitor the high water levels along the Sturgeon River, as "water levels within the watershed are retaining (higher) levels than we see typically," said Christian Benson, manager of environment for the City of St. Albert.

Peak levels of about 2.3 metres are usually seen in the spring from snowmelt before tapering off, but the river rose that high on July 16 before gradually dropping back down to around 2.1 metres on Tuesday.

The Sturgeon River is fed largely by rainfall, and is greatly influenced by four lakes within the watershed, Benson said.

The amount of rainfall has been higher in the last two years during the spring and early summer, said Kyle Fougere, meterologist with Environment and Climate Change Canada.

"It was pretty dry in March and April, but May, June and July have been quite wet so far," he said.

Those three months saw 308.6 millimetres of rain in total this year, with 121.2 millmetres in July alone. Last year was even wetter with 330 millimetres recorded over those months – levels not seen in St. Albert in 31 years.

As a result, some of the lower-level trails in the city near the river are flooded, including Ray Gibbon Drive and St. Albert Trail underpasses.

Residents and bikers barred from making their way through those underpasses may remember having to climb onto a jutting piece to cross flooded sections.

The city has put up some signs to remind residents of flooded areas, but levels aren't yet high enough for staff to start putting out sandbags.

"Luckily, we're not going anywhere close to that period at this point in time," Benson said. "Anything around the 2.4, 2.5 metres would trigger some internal actions on our end."

While flooded trails may be annoying to those on land, high river levels are a great time to get out on the water, he said.

"If someone is a kayaker, as myself, I've noticed higher water levels certainly encouraged different types of recreational activity," he said.

Leah Kongsrude, executive director at the North Saskatchewan Watershed Alliance, said water levels this year are about 50 to 75 centimetres higher than normal.

"Now that might not seem much, but because the Sturgeon River is like a valley and the floodplain around it is so shallow ... you notice the river spread out very quickly," she said.

High river levels can be helpful to maintain the watershed's overall health, Kongsrude said. More water in the floodplain is important to help wetland areas grow and become more established.

"Those are the areas of vegetation that really protect our communities from flooding and drought, so the better wetlands you have ... the stronger or more resilient your community is going to be to floods and droughts."

Kongsrude is a St. Albert resident and former environmental director for the city. Over the years, she said she had noticed the groundwater levels were decreasing, a sign that the river's natural barrier to flooding is wearing away.

"Once you build up an urban area, you have more roads, you have more parking lots, and the water's not allowed to settle in, it runs off very quickly," she said.

Higher levels of water in the Sturgeon River floodplain will actually help recharge those natural groundwater levels, she said, which a lot of the vegetation in the area depends on.

More water also means a faster flowing river, which can also help to flush out some of the sediment built up on the river bottom, she said.

"When the river really has low flows, the sediment starts to build up in areas ... So it starts to look more like a long, skinny wetland than it does a river," she said.

"What sustained higher flow levels are doing is helping to kind of flush out some of that material."

And don't blame flooding on the beavers, she said. Earlier this month, Sturgeon County said it would pay residents to kill problem beavers in order to try and stop floods on private land.

"Beaver dams are meant to be flooded. When water levels are this high in the Sturgeon River, the beaver dams are not making any difference," she said.

St. Albert has done an excellent job of monitoring its beaver populations, she added.

"If you have stable beaver populations, they will not let other beavers come in and build dams that could cause local flooding. So as long as we keep our exsiting population happy and in really good spots, they're great."