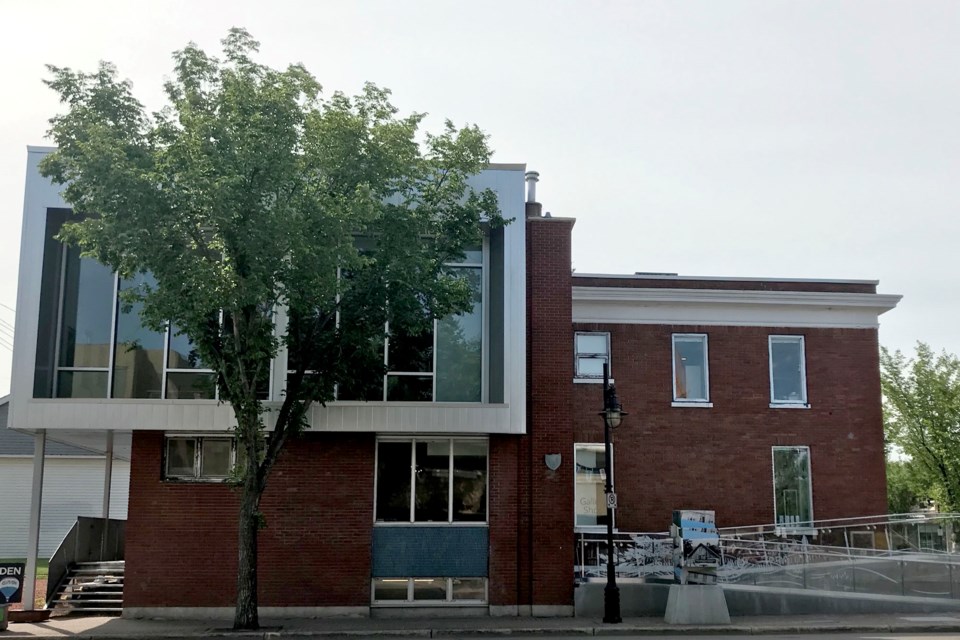 A side view of the of the Banque D’Hochelaga showcases its new addition for the rental and sales gallery, as well as its ramp to the front entrance for barrier-free access. KENDRA STAGER/St. Albert Gazette

To say the building that is home to the Art Gallery of St. Albert has a storied history is quite the understatement.

While the evolution of the Banque D’Hochelaga may be well-known to many residents of St. Albert, a recent opportunity to join a guided tour of the recently renovated building offered an enlightening look into the municipal historic site’s impressive past.

The first thing we learn is the two-storey brick building at 19 Perron Street in the heart of downtown St. Albert is actually not the first structure to have stood on that ground.

According to Vintage St. Albert – a Facebook page dedicated to sharing the history of the city – in 1912 Fleuri Perron, president of the Royal Hotel Company Limited and a former mayor of St. Albert, built the Royal Hotel on that very street corner using bricks from his own brickyard. Although it was well received, the hotel’s life was short-lived with the arrival of Prohibition causing its demise and the building was demolished within just a few years. According to Vintage St. Albert, the bricks were salvaged and used to build the bank building in 1920.

The Banque d’Hochelaga occupied the main floor of the new building with the bank tenant and his family living upstairs (which had remained a living space for business owners of the building until recent renovations). It was the only bank in St. Albert until the Depression forced it to move to Edmonton in 1936 and the building sat empty until Bill Schiewe and his wife bought it in 1949 and turned it into “Bill’s” restaurant. The Schiewe family lived upstairs throughout the restaurant’s run, and Mrs. Schiewe became quite famous for selling her freshly baked 25-cent pies and ice cream for five cents every Saturday.

The location was also home to the Rainbow Café Inn until 1955. Frank Labine owned the restaurant, but he was not present during day-to-day operations.

During this time, the basement of the building was mainly used for storage purposes, in addition to housing a well, which had its water pumped upstairs for use in the restaurants. Washrooms, however, were located outside and the old dishwater was pumped out to them.

In 1955 the Bank of Montreal opened at the location and was the only bank in the city until 1962 when the Bank of Nova Scotia opened in Grandin Mall.

The first major renovation of the building took place in 1960 with the construction of an addition at the back to house one of the bank’s two bank vaults – both of which remain today. In 1987, the Bank of Montreal moved next door, into the location that now houses the popular Jack’s Burger Shack, and, in 1988, the pottery studio Clayworks took over the main floor of the building, with Above the Bank Interiors, a home décor shop, residing on the second floor.

Briefly during the 1990s, the building was also home to a bridal house. During this time, there were stories circulating that the building was haunted and, if you looked long enough, some of the bridal dresses in the upstairs window were actually ghosts. These stories remain today, with visitors and employees alike claiming to hear footsteps coming from the second floor, and whisperings of a spirit in the basement that only children can see.

On Dec. 12, 2016, St. Albert City Council passed the Gallery barrier-free project unanimously, allowing for a large renovation to the building. The projected cost of the project was $1,555,116, with the city providing 70 per cent of the funding, and additional funding coming from the federal government.

After hearing concerns from community members about changing the look of the historic building, the Art Gallery of St. Albert assuaged those fears, emphasizing that it was more of an upgrade than a complete overhaul.

“The interior of the building is being changed to bring it up to today’s building code and we are retaining as much of its original character as we can during the restoration process,” they wrote. “The banque d'hochelaga [sic] building is a designated Municipal Resource, which solely means that the Art Gallery of St. Albert and Arts and Heritage Foundation will follow the Standards and Guidelines for the Conservation of Historic Places in Canada.”

During construction, between November 2017 and December 2018, the gallery relocated to a temporary space along Perron Street. The yearlong renovation of the 99-year-old building created a barrier-free facility while maintaining its historic character. It officially reopened to the public in February.

On the main floor, one of two bank vaults is still present, although the door has been bolted to the floor and the inside has been transformed into a small video-watching gallery. However, Jadalyn Garcia, an employee with the Art Gallery of St. Albert, says it still has similarities to its original state.

“It gets kind of cold in there sometimes since it’s still completely made out of cement,” she says.

At the back of the building on the second floor, a large addition was built to make more space for the rental and sales gallery, with floor-to-ceiling windows creating a bright and airy space for visitors. The once narrow, dingy staircase leading to the second floor has been replaced by a wide, rustic one, which blends modern and historic together with wooden steps and steel railings leading up the sides.

In the basement, new bathrooms were added, with one of the stalls still containing a bank vault’s door from the building’s days as the Bank of Montreal. Another call back to the building’s days as a bank are the light blue tiles on the outside walls near the front staircase: these tiles have been there since the bank opened, but had been covered in black paint for years before being cleaned off for the new unveiling.

While these renovations are certainly aesthetically pleasing, they weren’t the complete goal of the gallery.

“It’s a nice blend of modern and classic, but the most important part of the renovation was to make the building accessible to everyone,” says Garcia.

A ramp was added leading to the front entrance of the building, where before the only way in was by staircase, as well as accessible bathrooms and a wheelchair lift with access to all three floors of the gallery.

The Art Gallery of St. Albert has certainly been modernized with its new additions and renovations, but for the only historic commercial building still standing in the city, they have been blended in so as not to completely remove its historical significance.

While there are remnants of past businesses present to remind long-time community members of what once was, there is no mistaking that the Art Gallery of St. Albert is turning over a new leaf, and looking to the future of what the building has to offer.