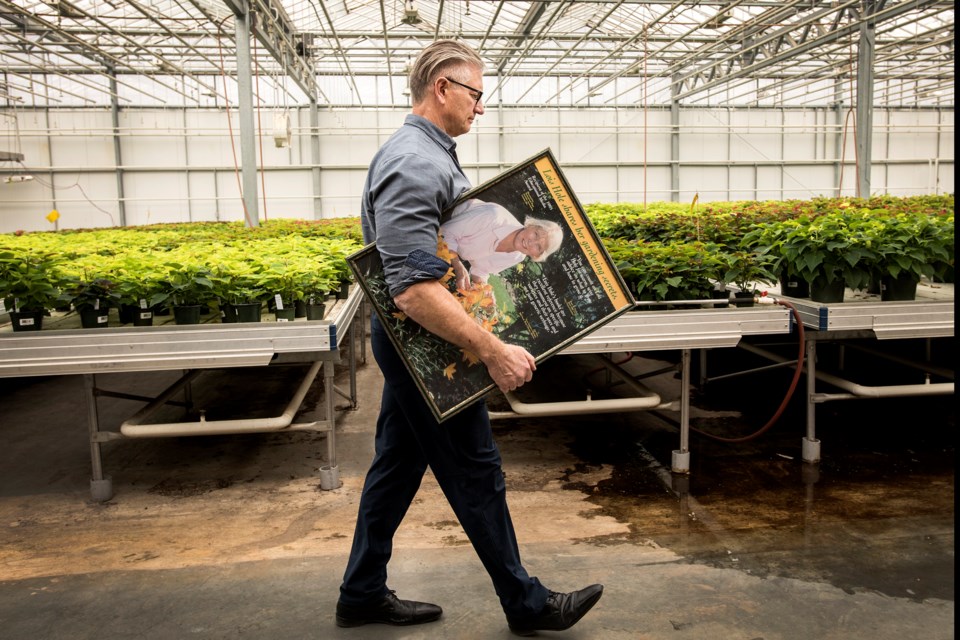 Jim Hole gathers an old book promotion picture of his mother, Lois Hole, amongst the poinsettias in Hole’s Greenhouses following the taking down of many other vintage photos of the Hole family over their 70 year legacy as seen in St. Albert October 28, 2019. The family has donated the old photos to the museum. The Hole family announced they have sold Hole's Greenhouses & Gardens after 68 years in business. The greenhouse will be taken over by TEC Property Inc. effective Dec. 31. TEC Property Inc., which owns the Enjoy Centre, will take over management of the business and will work with the Hole family in transition for the 2020 season. The family name will remain on the Enjoy Centre building. DAN RIEDLHUBER/St. Albert Gazette

The Hole family is saying goodbye to their iconic greenhouse business in St. Albert.

On Monday morning, the Holes announced they would be selling Hole's Greenhouses & Gardens to TEC Property Inc., the company that owns the Enjoy Centre.

The Hole family and their growing business has been a staple of St. Albert for almost 50 years. Jim’s parents, Ted and Lois Hole, started out as farmers and eventually began selling their products in the old red barn on their 185-acre lot on Boudreau. The Holes grew vegetables, including potatoes, cucumbers, carrots, cabbage, cauliflower and corn on their land and even sold commercial quantities to Safeway.

The family eventually decided to switch gears and dropped the vegetables in favour of their plant centre.

“People were shocked when we dropped the vegetable operation because we couldn't do both at the same time," Jim said.

"(For) both mom and dad, it was bittersweet for them.”

But as a family of entrepreneurs, change was always a part of the Holes' lives.

“We always did the calculations and figured out what was the best way to go, and then being entrepreneurs you've just got to do it ... Not everybody wants to take risks like that, but we never shy (away from) doing it,” Jim said.

In 1979, Jim, his brother Bill and sister-in-law Valerie took over the company and expanded it to become one of the largest independent retail garden centres in Canada. In 2009, they began construction on the Enjoy Centre, with added space for businesses to lease.

In 2015, the Holes sold the Enjoy Centre but kept the greenhouse to focus on their passion.

“If you look at the Enjoy Centre, there were quite a number of other businesses there and it's a whole different skill set required to become a landlord and manage all that, which is pretty overwhelming. So we refocused on what we do best, which was the greenhouse,” Jim said.

The Holes will own the business until the end of December and then stay on to help the transition to the new owners until June 30, 2020.

Jim said it was the right time to make the sale and he feels good that all his staff will continue to have jobs at the greenhouse after the sale.

“It just seemed like the right time to do it. And we've had a lot of great memories with the old place, then with the new place, too,” he said.

Jim said his best memories of his time in the greenhouse business were when he was just a kid, walking through the greenhouses with his mom Lois Hole.

Lois served as chancellor of the University of Alberta and Lieutenant Governor of Alberta but always loved coming back to the greenhouses.

“She would kind of come back to the greenhouses, make us lunch, and we'd walk through the greenhouses and check the plants out. She loved doing that. It didn't matter that she was Lieutenant Governor, she just loved that aspect of it ... that's my most cherished memories, is walking through there with Mom.”

From one kind of gardening to another

Part of what contributed to this being the right time for the sale was that Jim's interest in the medical cannabis industry has been ramping up. Jim signed on with Atlas Growers Ltd. in late 2017 and is the company's vice-president of cultivation.

“There was a really exciting new field of medicinal cannabis, so because I was really enamoured with the idea of trying to make this medicinal cannabis industry the best it can be and kind of look at, how do we kind of balance both,” Jim said.

“It's just an exciting new field. I've always loved plant science – that's my thing. And I like the challenge of new crops, and I've grown many, many crops, but now I want to take it to the next level."

Jim said Bill and Valerie had been working hard in the business for years and are ready to move on as well.

With shifting his focus to Atlas Growers, he said his schedule will become more structured.

“In the family business, you just kind of go 24/7. If the alarm goes off in the middle of the night, you're out there, (you or) one of the family members, so now I think I'll have the luxury of actually seeing what a May long weekend actually looks like not working,” Jim said.

The Hole family will also continue to pursue their own branded products, like their potting soil and hemp fibre.

The Hole family name will remain on the building and the sale will be final on Dec. 31, 2019.