Honda has a new model in its lineup: The 2018 Clarity Plug-in Hybrid, which Honda says provides the best overall combined range and interior volume in its class. The Clarity competes with the Chevrolet Volt and Toyota Prius Prime.
0
Sep 8, 2018 12:01 AM By: Garry Melnyk 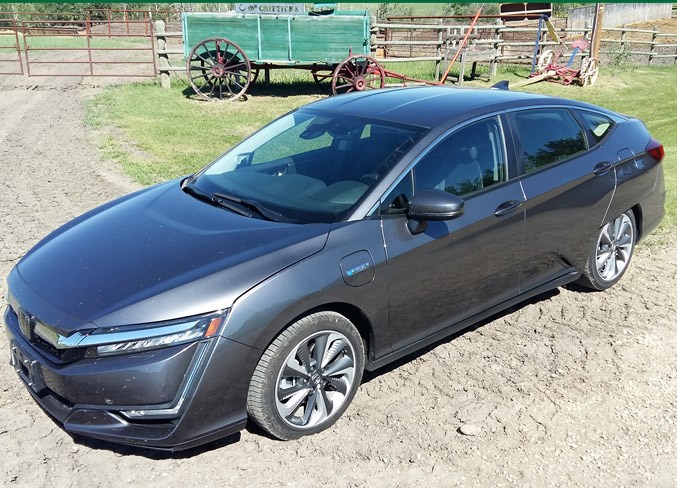 The 2018 Clarity Plug-in Hybrid, which Honda says provides the best overall combined range and interior volume in its class. The Clarity competes with the Chevrolet Volt and Toyota Prius Prime.

Honda has a new model in its lineup: The 2018 Clarity Plug-in Hybrid, which Honda says provides the best overall combined range and interior volume in its class. The Clarity competes with the Chevrolet Volt and Toyota Prius Prime.

Its 76-kilometre all-electric range rating is better than the Prius Prime and almost matches the Chevrolet Volt. As my daily commute in one direction is around 13 km, I could make a few round trips to work on just the battery before plugging in the Clarity. Run the battery down to one or two bars and you’ll need about 12 hours to recharge using a household current. So for most people this car enables comparatively inexpensive zero-emissions all-electric driving for most daily driving situations. Long distance travel is also possible with the hybrid powertrain, which helped the Clarity Plug-In Hybrid receive a 547-km combined gas-electric NRCan range rating. This was proven with a couple of out-of-town trips I took in my test car.

The 1.5-litre DOHC i-VTEC four-cylinder Atkinson-cycle engine develops a peak 103 net horsepower at 5,500 rpm and 99 lb.-ft. of torque. Since the gasoline engine can be decoupled from the rest of the hybrid powertrain, it only operates as needed. Depending on the battery’s state of charge and other parameters, the engine will automatically shut off during deceleration or when the vehicle is at a stop. When needed, the gasoline engine restarts automatically, without action from the driver.

However, when the driver desires extra power in situations such as highway passing, even higher performance can be invoked by depressing the throttle pedal through a resistance point, toward the end of the pedal travel, bringing the full power of the engine and electric motor together for maximum acceleration, regardless of driving mode. It was impressive for those times I had to pass on a two-lane highway.

A car’s styling is a subjective thing so I can only say the Clarity Hybrid to me is a mishmash of lines and shapes. Inside, things are better. It is spacious and will easily accommodate five adults or a family of two adults and two children. There is a premium feel with materials and design, an open sleek instrument panel, natural-looking wood-trim panels and large windows. Seating comfort for me was lacking. Probably due to the smaller, thinner seat cushions.

The Clarity trunk is among the largest in its class with a capacity of 439L made possible in part by locating the battery pack under the floor. Honda says the trunk can easily accommodate four large golf bags. All models feature a 60/40 split and folding rear seatback, which of course opens up more luggage space. The trunk is carpeted protecting your goods and lending a nice finishing touch to that space.

The Clarity excels when it comes to its ride. Not a Sports sedan, but the ride comfort is the Clarity’s strong suit; its suspension effectively absorbs ruts and bumps. The interior cabin is quiet with minimal road noise and almost silent when driven on electric power. Pushing through tight curves will result in a little too much body lean and steering that is sluggish in its response. Take a more relaxed approach in driving though; the Clarity is just fine but not as refined as other similar-sized sedans.

Certainly a nice upscale hybrid, well-built and likely very reliable as you would expect a Honda to be. The price of admission is $39,900 for the entry-level model and $43,900 for the fully loaded Touring model, which I enjoyed. If you can score some government incentives, the price tag comes down.