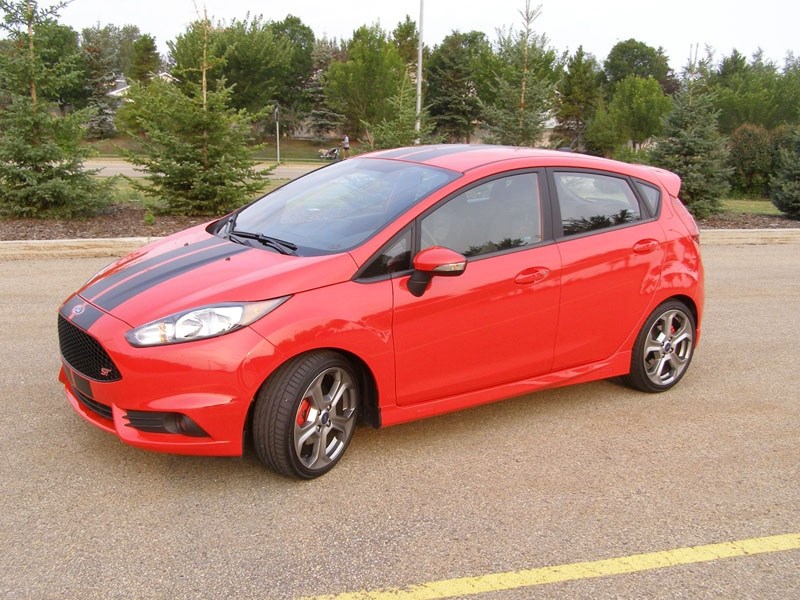 Ford is really on a roll with performance vehicles right now; the 450-hp F-150 Raptor, the Shelby GT350R Mustang, and the new GT supercar. This is a serious endeavour as Ford has fully committed itself to an unprecedented rollout of 12 new performance cars by 2020. All of those vehicles will be developed under the new global Ford Performance banner that brings together racing, performance vehicles, and parts to spread costs and deliver faster Fords.

There is even a new performance Ford you can afford; the Fiesta ST. This model has been enjoyed by driving enthusiasts in Europe for a while and now we can partake of its fun. Under the hood is a turbocharged 1.6 litre, four cylinder rated at 198 hp and 201 lb-ft of torque. Docile around town, once the turbo kicks in above 2,500 rpm the power surge builds smoothly, then really comes on strong at 3,000 rpm. At that point the Fiesta rockets ahead so hold on. Clutch take up is very good with a light feel connected to a very precise six-speed manual transmission. This makes for easy around-town driving. If you need to nip around traffic that’s no problem as you have plenty of power on tap and a suspension more than capable of keeping the tires glued to the pavement. On smooth roads the ride is fine and I never had any apprehension taking a curve well above the limit of a normal car. This race car-like handling comes at a price, though. The very, very firm setup made driving for any length of time on our rough and potholed streets less than enjoyable and gave me sore neck muscles.

Steering is direct and quick, but like most electric systems, it doesn’t provide the purity of feedback that hot hatch fans might expect. The brakes are firm, scrubbing off speed quickly, at the expense of an immense amount of brake dust.

Inside the very slim and leather trimmed Recaro seats hold you firmly in place. They are clearly designed for a certain human body structure which my six-foot profile fits reasonably well. As such they might not be to everyone’s liking. Probably more suited to someone young and slim. Being a sub-compact there is not much stretch-out room and with the hard ride, the ST might be more suited for urban trips and short commutes. I’m speculating as I had no highway time in the ST. The interior looks a lot like a regular Fiesta, save for the smaller Nav screen with MyFord Touch. If you’d never seen the full-size version, you wouldn’t think that there was anything wrong but it’s fairly small, and hitting the right keys on the touchscreen can be a bit challenging. Rear seat room is tight so forget putting a baby seat in the back or a couple of adults. There is just no room.

Why the five-door? Because Ford only builds the five-door hatch in Mexico and that’s where our cars come from. I’m told the two extra doors add 60 kg. Pity, the extra weight hurts fuel consumption and straight-line speed. Otherwise engine, suspension, exterior and interior upgrades and most options are similar to other world Fiestas.

One fact I can’t knock is that as a conventional hatchback the Fiesta ST is capable of swallowing up lots of cargo when the 60/40 split rear seatbacks are lowered. But this is not a car for granny to drive to the farmers’ market. She would be happier in an SE model. The ST is a serious road beast and the reason someone who enjoys driving is going to pay $8,236 over the base $14,773 Fiesta model. Along with the styling enhancements, the $23,009 Fiesta ST gets transformed into a pocket rocket that's capable of 8.9 L/100km in the city, 6.8 on the highway and 8.0 combined. My combined fuel consumption was 7.4L/100km.

A slick six-speed manual is the only transmission, because, well that’s how you enjoy a car like this. The sound of the raucous little four ahead of the firewall and the burbling exhaust popping and crackling from behind brought back memories of my turbocharged 79 Mustang Cobra, although the sound from the Fiesta’s tail pipe is a little more subdued. The 205/40R17 Bridgestone Potenzas at each corner aren't massive, but then again they're large for such a small car and wrapped around my tester's Rado Grey painted Y-shaped five-spokes the combo looked good.