It's cold outside, and there's a new website in town that could help you keep the heat inside your home. MyHEAT.ca launched in St. Albert earlier this month.
Dec 23, 2016 11:00 PM By: Kevin Ma 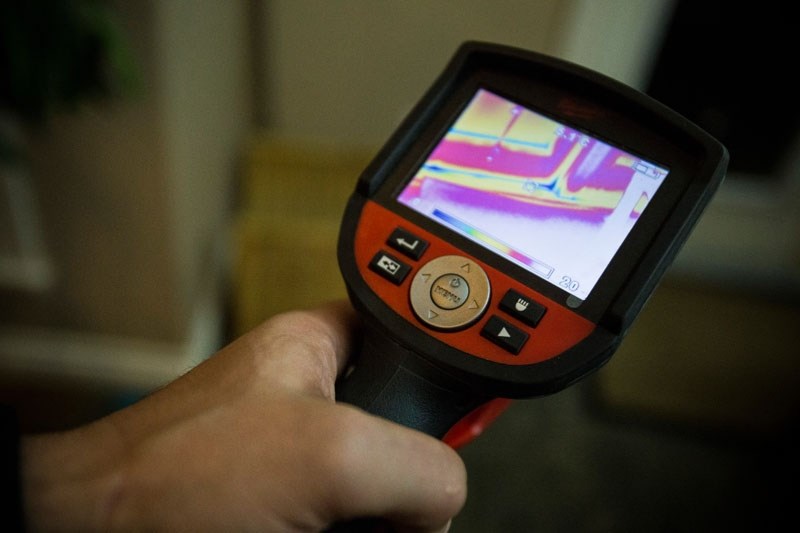 COLD SPOT â€“ Thomas Barr spots an unusually cold corner in the back door of Leclair’s home using a thermal camera. While the door reads 20 C

It's cold outside, and there's a new website in town that could help you keep the heat inside your home.

MyHEAT.ca launched in St. Albert earlier this month. The website uses thermal imaging and computers to colour-code each home in the city based on the amount of heat it predicts each loses. Many residents have checked it out, only to be dismayed that their home was glowing red or orange, suggesting high heat loss.

Valerie Leclair's was one of them. Her stylish 2005 Lacombe Park estate features in-floor heating, a snazzy paintjob and a HEAT score of 7/10 (orange), which implies that it's oozing heat.

To find out if the site was right, and what Leclair could do about it, the Gazette called in the experts.

MyHEAT is a Calgary-based company that seeks to reduce greenhouse gas emissions by educating people about their home's energy use and the money they can save by using less.

The company uses technology developed by the University of Calgary to detect the amount of heat coming off a community's homes and combines that data with an interactive map. Users can click the map to see detailed thermograms of homes and a HEAT score that shows the amount of heat the site predicts the home is losing. The score's scale runs from one to 10, with one being low loss (green), five average (yellow), and 10 high (red).

Taylor cautions that the HEAT score/colour is an estimate of a building's energy consumption, not its efficiency. Red homes are not necessarily badly insulated, and green ones aren't always super-efficient.

"What we've found is that building size is often a very strong predictor of energy consumption," he says.

The MyHEAT site places heavy emphasis on size on the assumption that big homes use and lose more energy than small ones as they have more surface area from which to lose heat. This tends to bias big homes towards the red end of the scale and small ones towards green, which penalizes efficient big homes.

This could explain why virtually all the small homes on the MyHEAT map of St. Albert show up as green and almost all the big ones are red, and adds nuance to the fact that the map shows old neighbourhoods like Grandin as mostly green and new ones like Kingswood as mostly red. Grandin homes are generally much smaller than the ones in Kingswood and would have less surface area from which to lose heat, but would also have been built to older, lower insulation standards. The Kingswood homes may lose more total heat, but are likely better on a loss per square foot basis.

Taylor says site visitors have told his team they're more interested in how efficient their home is rather than how much energy it uses. His staffers plan to bring in a new score system next year that reflects efficiency.

"We're certainly not claiming to be an absolute rating on a home. The best way to get that is to have an energy auditor come in and do an energy audit."

The Gazette asked Thomas Barr, an energy efficiency expert with Edmonton's NuEnergy Group, to do a quick heat audit of Leclair's home.

A home energy audit will typically cost $300 to $400 and tell you the most cost-effective ways to reduce your energy bill, says Godo Stoyke of the energy efficiency firm C Returns. Most focus on insulation and heating systems, but some will touch on water, electricity, and renewable energy.

One way to reduce a home's energy use is to draft-proof it, Stoyke said. Most homes have the equivalent of a dog-sized hole in their wall when you add up all the cracks and leaks in them, he notes in his Carbon Buster's Home Energy Handbook. Sealing those leaks costs around $200 and can chop about 20 per cent off your heating bills, which means you'll recover your investment in about two years.

Barr breaks out an infrared camera to find leaks and cold spots in Leclair's home.

The front door looks pretty good, with no cold spots detected by his camera and strong seals all around. The corners of the back door are very cold, however, reading 0 C on the camera, suggesting poor seals and a possible draft.

"From Day One when we moved in, water poured out of there," she says.

That exhaust fan doesn't have a proper seal, says Barr, who confirms cold spots around it with his camera moments later.

Improper seals let warm, moist air out of your home and into your attic where it freezes in the winter, often creating huge blocks of ice, Barr says. This not only lets out heat, but also lets in water in the spring when that ice melts.

Leclair says they have the same water problem in the main fireplace, the chimney of which corresponds to a big red blob on their home's thermogram.

Fireplaces are often under-insulated and this can be tough to fix, Barr said. This particular one also had an obvious draft, suggesting a faulty draft dampener. He recommends removing or sealing fireplaces and using an electric one instead.

Barr said a place this old likely has R12 insulation in its walls, which is below the current building code standard of R20 and the R40 walls found in high-performance homes. He recommends adding insulation in a decade when Leclair has to replace the stucco.

Inspecting the attic, Barr finds that the home has about 8.5 inches of cellulose in it, equivalent to an R30 in terms of insulation. That was good for when it was built, but the current building code requires R40, and high-efficiency homes will have around R70.

Anyone with less than eight inches of insulation (R30) in their roof should definitely add more, Stoyke says. Low gas prices mean a long payback, but next year's carbon price will accelerate it, and insulation lasts pretty much forever.

Barr says Leclair could likely double her attic insulation for about $840, about $40 of which was to rent the blower from Home Depot.

Leclair says that her home has a programmable thermostat, and that her family uses it to turn the home's heat back three degrees at night and during the day.

"Perfect," Barr replies – if you crank the heat back more than three degrees, you cancel out your savings, as your furnace has to run longer.

A programmable thermostat, properly used, can shave about one to two per cent off your heating bill per degree of setback, Stoyke says.

Down in the utility room, Barr spots more leaks in need of insulation around the home's exterior ducts and wires. He also notes that there isn't a heat-recovery ventilator, which is a device that recovers heat from a home's waste air.

"It's huge savings," he says, and he likes to see those in new homes.

Leclair has a standard furnace. Stoyke notes that a furnace tune-up every five years can knock about 10 per cent off a home's energy consumption with roughly a two-year payback.

For Leclair's home, the MyHEAT website proved fairly accurate. The home's score suggested, correctly, that the home was using more energy than it should, and the thermogram identified a significant source of heat loss.

While MyHEAT isn't completely accurate on a micro level, Barr says it could be useful on a macro one, helping communities identify high-consumption regions to target for energy retrofits. It could also encourage neighbours to compete to see whose home can get a better rating on the website.

"If we can fine-tune the algorithms, it could be a great tool."