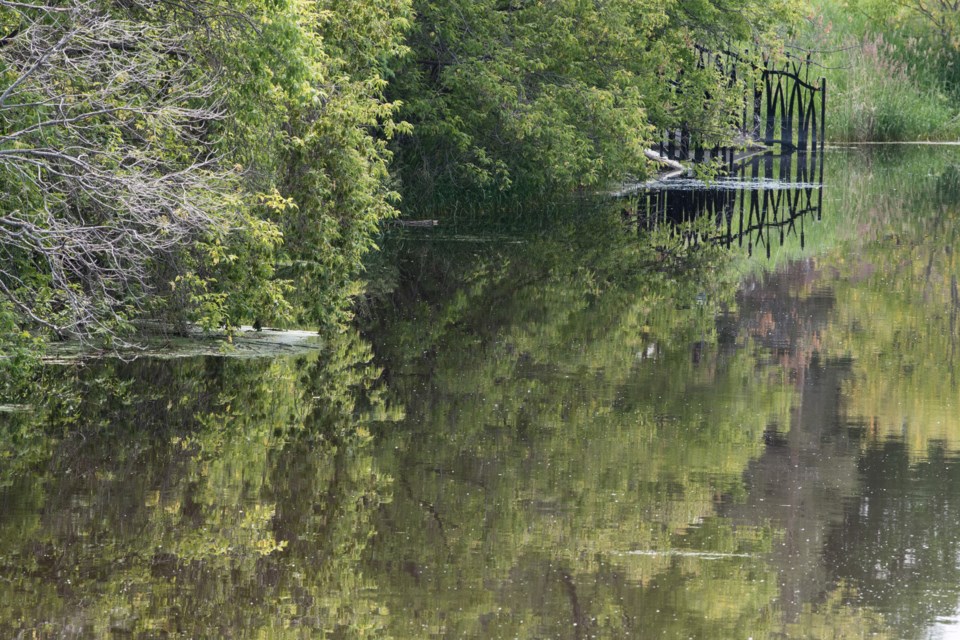 Trees reflect in the high waters of the Sturgeon River in St Albert on Monday June 29, 2020. JOHN LUCAS/St. Albert Gazette

A previous version of this article directly linked selenium pollution levels from Teck Resources coal mines upstream to declining fish populations in B.C. An investigation into the cause is ongoing, and the article has been updated with information from Teck Resources.

Two St. Albert residents are calling on city council to write a letter of concern to the province about coal mine operations on the eastern slopes of the Rocky Mountains.

On March 15, councillors heard a presentation from two residents concerned about what impacts these operations could have on the environment and provincial watersheds, including St. Albert's water supply.

"The decision to open mines in sensitive areas specifically impacts St. Albert, and many other communities across the Prairies," explained resident Ronda Metszies to council. Proposed mines intersect with several river sources, including the North Saskatchewan River, from which St. Albert draws its drinking water, she said.

Pollution is a main concern, as dirt and soil dug up to expose coal underground leach natural elements like selenium into the water. Though selenium is naturally occurring, it has been found to devastate fish populations, while chronic exposure in humans can cause nausea, skin lesions, fatigue and neurological disorders.

"No method exists, which has been scientifically proven, to protect waterways from contamination with selenium once coal mining of this scale is underway. Time is of the essence," Metszies said.

Metszies, along with Janet Bertsch, asked council to consider writing a letter, which would add St. Albert to the list of other Alberta municipalities and First Nations that have expressed their opposition to the province's sudden removal of a 1976 policy without any consultation last year.

The decision prompted significant public outcry, and recently the province reinstated parts of the policy. However, six leases are still permitted to continue coal exploration and drilling in previously protected areas, including Valory Resources' Blackstone project in Edmonton's headwaters. Lease holders would still need to go through an environmental impact assessment before getting a mine permit and licence from the Alberta Energy Regulator.

On March 29, Savage announced the appointment of a five-member committee chaired by Ron Wallace, a former National Energy Board member, to consult the public on how to "modernize" the policy. The committee's final report is due Nov. 15. No environmental groups or municipalities are represented on the committee.

An online survey is now open to gather feedback. The survey closes on April 19. Find a link to the survey at www.alberta.ca/coal-policy-engagement.aspx.

However, that doesn't mean the North Saskatchewan River is protected.

While rare, tailing dams meant to retain runoff or wastewater from coal mine operations can fail with extreme impacts to downstream water quality, the report notes. This could be the largest risk to the Edmonton area's drinking water source.

In 2013 for example, a tailings dam at the Obed Mountain coal mine near Hinton failed, releasing over one million cubic metres of wastewater into the Athabasca River.

In B.C.'s Elk Valley, adult populations of westslope cutthroat trout fell by fell by 93 per cent as selenium pollution levels have grown, though Teck Resources, which has coal mines upstream, claimed in an email to the Gazette that its preliminary findings showed "water quality constituents, including selenium and calcite, were not a primary contributor to the decline." The Gazette has requested a copy of the preliminary findings for review.

Having assessments completed before any mining activity is done is "critical" to protecting the watershed, the report reads. Once selenium is exposed and released into the water, "it is very difficult" to mitigate effects on water quality, survival and growth of fish populations, and overall aquatic ecosystem health.

Christopher Smith, parks co-ordinator with the Canadian Parks and Wilderness Society Northern Alberta, said the organization doesn't believe appropriate methods have been devised to protect watersheds from coal mining impacts. And those impacts can be far-reaching.

He pointed to a study of how far contaminants from the Obed Mountain coal mine tailing pond reached. The coal process water, heavy in arsenic, travelled approximately 1,100 kilometres downstream.

"This is definitely a concern for anyone who uses the North Saskatchewan River downstream because these impacts can reach quite far if there is a disaster. While they are rare, we know they can happen."

During the council meeting, Mayor Cathy Heron said council had received a lot of feedback from residents on the issue. In an interview with the Gazette before consultation plans were announced, Heron said the Alberta Urban Municipalities Association (AUMA) had written a letter to the province requesting municipal engagement on coal mine policy.

"There is no motion to put forward a letter because it needs to be bigger, it needs to come from AUMA or the Rural Municipalities (of Alberta). That's where the advocacy belongs," Heron said. "A letter from us right now would probably be meaningless to (the province)."

The original coal mine policy involved years of consultation before areas in the eastern slopes were designated for tourism and natural areas, she said. The province should not consider this consultation process as a way to "check off a box – it has to be meaningful."

Metszies said she wouldn't count a letter from city council as meaningless, as it would reflect the concerns of residents. A recent poll suggests nearly 70 per cent of Albertans opposed the expansion of coal mining along the eastern slopes of the Rockies.

"I think it certainly has meaning for those of us trying to have our voices heard," she said. "I do feel that at the end of the day, our elected representatives need to listen to the voices of their constituents, and represent those as best they can."

During the council meeting on April 6, Coun. Sheena Hughes gave a notice of motion for Mayor Heron to write a letter of concern to the province. That motion will be debated at a future council meeting.

The letter to the province would request a review of the impacts of strip mining in Alberta's Eastern Mountains, that municipalities are consulted as stakeholders on future coal policy changes and a moratorium is placed on ongoing coal exploration until after independent and extensive public consultation has occurred and a replacement coal policy is in effect.