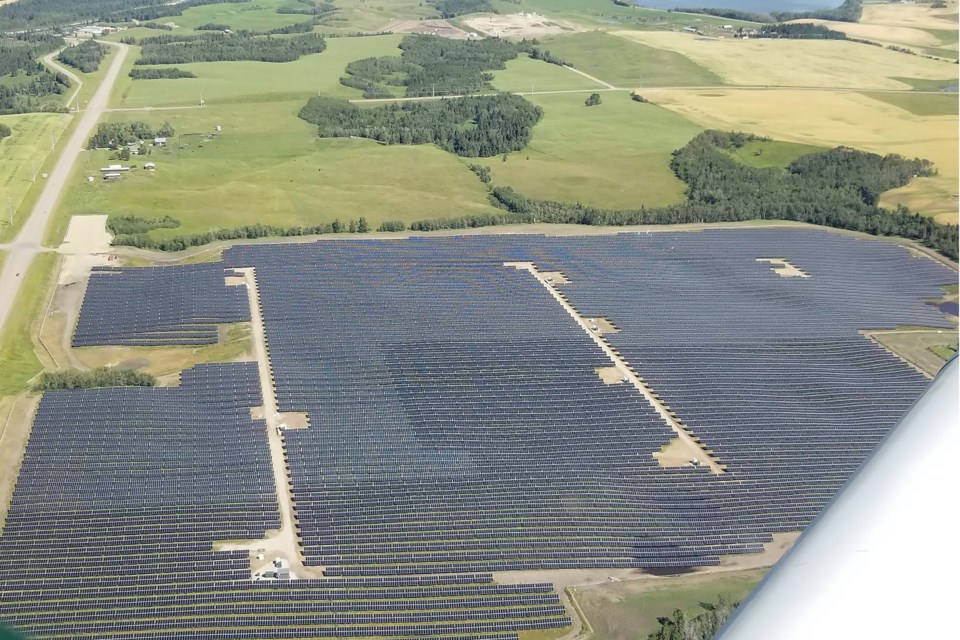 Solar farms could be a great way for cash-strapped cities to make money, says an Innisfail town councillor.

Innisfail Coun. Jean Barclay will give a free online talk this Feb. 25 on her community’s new 47-hectare, 25 MW solar farm. The talk is part of Solar Alberta’s annual speaker series on renewable energy.

Large-scale solar power installations are catching on in Alberta. Bon Accord fired up its 1.6-hectare array last September, and the Edmonton International Airport has a 254-hectare system in the works. St. Albert is now studying a potential $33-million solar farm that would cover six hectares of the Badger Lands.

In an interview, Barclay said a local developer came to Innisfail town council back in 2018 with a proposal to build a solar farm on 115 acres of town-owned land north of the local golf course.

“It was a huge opportunity for a smaller community like ours,” Barclay said – the town was looking for new ways to make money, and didn’t plan to use that land for 40 years anyway.

“It was really about the economics more so than anything, and an opportunity for us to get a large industrial player like that in our community.”

The town struck a deal with the developer (who later handed the project off to Elemental Energy) to put 25.3 MW of solar panels on the land. Construction started in October 2019, with the farm up and running as of last July.

Barclay said Innisfail will now earn about $190,000 a year in tax and lease revenue from the farm – equivalent to what it would get from a 2.5-per-cent tax hike. Some $20,000 of this annual revenue will go into a community development fund. The project also created about 75 jobs, most of which were filled by area residents.

The project wasn’t without its critics, Barclay noted. Some were worried it would affect the view from the nearby golf course (the developer has put up some trees to screen the view), while others erroneously compared it to Medicine Hat’s mothballed solar thermal plant (that facility used mirrors to heat oil to create steam for a turbine, whereas this one is a solar electric operation that converts light to electricity with photovoltaic panels).

“The difficult thing for us was to understand what would be a fair lease price,” Barclay said, as Alberta had just one other solar farm of this scale at the time (Brooks Solar, also run by Elemental).

Barclay said she hasn’t heard much criticism of the farm since it opened – you can’t actually see it unless you’re on the highway or at one particular hole on the golf course, and the cash from it helped the town pass a zero-per-cent tax hike last fall.

Barclay said solar farms could be a great new revenue source for municipalities, but communities still have to weigh them against other potential land uses.

“We know we’re struggling with revenues in this province right now,” she noted, and that could mean more cuts to municipal funding in the next provincial budget.

“We need to be creative and innovative and find ways to generate revenue.”

MacKenzie said Barclay’s talk (which would also feature project builders David Pichard and Jamie Houssian) should be of note to any community that is interested in renewable energy.

The talk runs from noon to 1 p.m. Feb. 25 and will be livestreamed to Facebook. Visit solaralberta.ca to register.