How to ban the bag

Do plastic bag bans work? Case studies from around the world say yes, with the proper implementation.
Jan 19, 2018 2:07 PM By: Kevin Ma 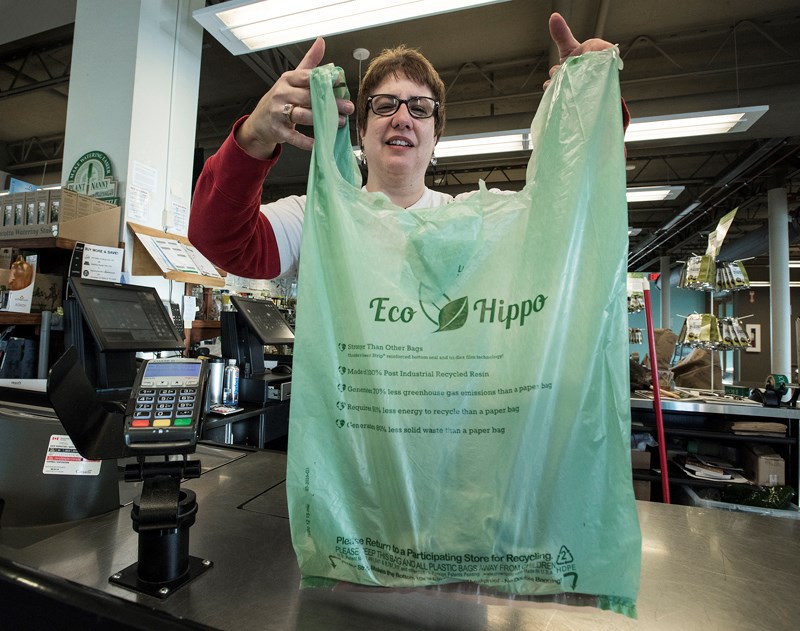 Lynn Hengen of St. Albert and a cashier at Hole's Greenhouses, checks out merchandise using their new compostable bags in St. Albert.

CORRECTION
Photo captions for this story incorrectly suggested that the City of St. Albert is studying a ban on single-use plastic and cutlery. Council considered, but did not elect to pursue such a study. The Gazette apologizes for this error.

St. Albert city council asked administration this week for a report on the impacts of banning disposable single-use bags. It considered, but did not ask for, a similar report on banning single-use plastic straws and cutlery.

There are hundreds of bag bans and a handful of straw bans in place globally. The Gazette decided to investigate them to see how such policies could affect St. Albert.

Plastic is a relatively small part of the waste stream by weight, notes Christina Seidel, executive director of the Recycling Council of Alberta – about seven to nine per cent of landfill waste, the Alberta Plastics Recycling Association estimates.

“That’s not the point,” Seidel continued – the point is that single-use plastic bags and straws represent a loss of a non-renewable resource.

“It’s millions of bags we go through every year,” she said, and it’s ridiculously wasteful.

Each tonne of plastic we keep out of the landfill also prevents about three tonnes of greenhouse gas emissions, Seidel noted.

Plastic bags can be recycled but usually aren’t, said Melissa Romero, policy associate with the non-profit Californians Against Waste (which has promoted waste reduction policies for about 40 years).

“It’s a very low-value material,” so it usually ends up covering landfills instead, she said.

Bags and straws contribute to what many call an epidemic of plastic waste. Some five to 13 million tonnes of plastic waste enter the ocean each year, accounting for over 80 per cent of marine litter, the European Union reported last week.

Whales and turtles often eat plastic bags, while plastic straws break down into microplastics that are eaten by fish that end up on our dinner plates, said Dune Ives, executive director of Lonely Whale (the non-profit behind Seattle’s upcoming plastic straw ban). Microplastics now infest some 83 per cent of global tap water supplies, a recent study found.

“If we have an option to transition away from a harmful single use plastic product, we should probably do that,” Ives said.

What’s in a ban

Montreal, Fort McMurray, China, France, and Italy are some of the hundreds of jurisdictions that have banned single-use plastic bags. Others, such as Ireland and England, have imposed levies on those items.

California implemented a state-wide ban on single-use plastic bags in 2016, as have about 180 of its communities, Romero said.

The California ban is similar to most of the ones examined by the Gazette. It bans grocery stores, pharmacies, and convenience stores from providing single-use plastic bags, and requires stores to charge at least 10 cents per reusable or paper bag, the cash from which stays with the store and must be used to market reusable bags.

Many bag bans include exemptions. Seattle’s ban exempts bags sold in packages or used for bulk items, vegetables, meat, take-out, and dry-cleaning. Fort McMurray exempts all that as well as bags used for alcohol and drugs and by non-profits. California’s ban exempts compostable bags.

Straw bans are much less common, but voluntary campaigns such as The Last Plastic Straw are catching on, Seidel said. These campaigns encourage restaurants to only distribute plastic straws on request.

Lonely Whale’s Strawless in Seattle campaign convinced about 200 businesses to ditch the plastic straw last year, Ives said. That took some 2.3 million straws out of circulation last September, and will eliminate some 25 million a year if those businesses stick with it. The campaign helped convince the city to introduce a city-wide single-use straw ban that kicks in this July, which could keep some 60 million straws a year out of the landfill.

Bag bans reduce waste. California has seen a 72 per cent drop in the amount of plastic bag litter found during its International Coastal Cleanup Day events since 2010 after many local and state-wide bans kicked in, Romero said.

The City of Seattle reported a roughly 50 per cent drop in the amount of plastic bags in its residential waste between 2010 and 2014 (its ban passed in 2011) despite a 10 per cent growth in population.

Fort McMurray and the Regional Municipality of Wood Buffalo saw less of a reduction, a 2011 study by Infact Research suggests. Although the ban took some 7.8 million bags off the street, the study found that residents subsequently bought about six million plastic bags.

Bag levies also work. Seidel noted that England saw a massive drop in plastic bag use after it imposed a 5 pence levy in 2015 – about 85 per cent, reports the Guardian.

Bag bans change behaviours. California shoppers have largely shifted over to reusable bags in the wake of the ban, with some forgoing bags entirely, Romero said. San Jose reports that some 46 per cent of its residents used reusable bags post-ban, compared to about three per cent before, with about 43 per cent not using bags at all (13 per cent previously).

Again, Fort McMurray saw less behavioural change, Infact Research found. Residents complained of piling up scores of reusable bags as they kept forgetting to bring them, and there was some evidence that this led to less impulse buying.

Levies on reusable and paper bags can offset the cost of bans. San Francisco (which banned single-use plastic bags in 2007) lets businesses keep the money from such a levy to offset their costs and discourage bag use, said Alex Dmitriew of that city’s environment department. Some companies tell him that they’re now ordering 75 per cent fewer bags.

Seattle companies are now switching to paper straws instead of plastic ones, Ives said. The straws cost more, but their “on request only” policy means they have to give out 50 to 90 per cent fewer straws, which means money saved.

Bag bans can cost consumers, which may be why some U.S. bans exempt low-income residents. The cost doesn’t appear huge: one 2010 study of Los Angeles County’s ban estimated that it would cost residents about $5.72 a year.

How to do it

Public outreach was a big part of San Francisco’s bag ban success, Dmitriew said. His city went door-to-door to thousands of businesses and held scores of public and online promotions prior to bringing in its ban in 2007.

Ives said the market should lead efforts to ban plastic bags and straws. She suggested starting with an “on-demand” straw policy, as it saves businesses money and is hard to argue against, and then moving onto a ban or tax.

A bag ban or levy will likely reduce plastic waste in St. Albert with minimal impact to consumers and businesses if done properly, and the city has many examples to follow if it wants to do so.