The sister of Jaxon Joseph said that the support from the community has helped ease the grieving process after the loss of her younger brother. Hundreds of St. Albertans gathered together at St.
0
Apr 14, 2018 10:13 AM By: Jennifer Henderson 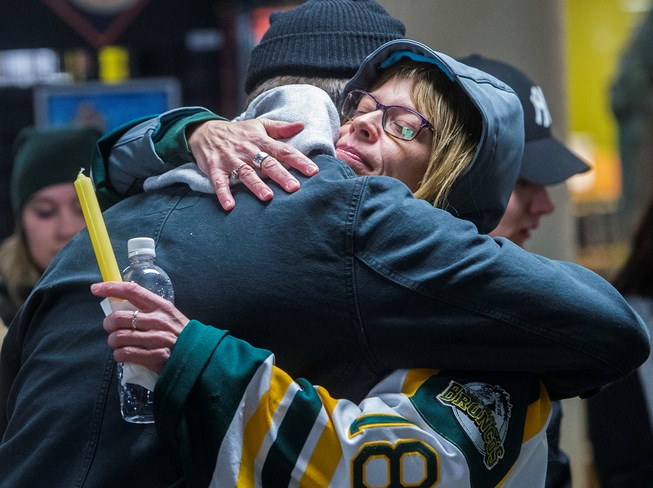 Shauna Nordstrom, the mother of Humboldt Broncos hockey player Logan Hunter, shares an embrace during a public vigil for her son and fellow Broncos teammates Conner Lukan, Jaxon Joseph and Stephen Wack who were all killed last Friday when the team's bus collided with a tractor trailer at an intersection near Tidsdale, Saskatchewan. Hundreds attended the vigil in St. Albert Friday night outside St. Albert Place.

The sister of Jaxon Joseph said that the support from the community has helped ease the grieving process after the loss of her younger brother.

Hundreds of St. Albertans gathered together at St. Albert Place for a candle light vigil to honour the lives of  those who died in the Humboldt bus tragedy. Jaxon, Logan Hunter, Stephen Wack and Conner Lukan were remembered on Friday night as members of the community lit a candle for the four former St. Albert Raiders.

Taylor Joseph, the older sister of 20-year-old Jaxon who was killed in the bus crash, said they arrived back to St. Albert from Saskatchewan at 2 a.m. and saw green ribbons lighting their way home.

“This community has shaken my family to its core in the best possible way,” Taylor said. “It was amazing to see the amount of community support and everything the community has done.”

Linda Michailides, who planned the vigil with the help of the city, said it was important to bring together the community to grieve and support each other. Michailides son was close friends with Hunter.

“This is a healing process for everybody,” Michailides said. “Which parent doesn’t feel for these people? Which sibling? Which grandparent? You have compassion and you empathize.”

Throughout the night a long line snaked through the lobby of St. Albert Place as the community lined up to sign the four condolence books set up for the families.

Many in attendance were wearing hockey jerseys and sharing hugs and laughs as they remembered the men.

Three men who knew the local players came out to remember their friends who passed away in the accident. Adrian Parth, Peter Michailides and Aidan Steinke said that it is nice to come together and to lean on each other for support during the difficult time.

“We all knew if we isolated ourselves from everybody it would just make it worse. It was nice to get together and let some tears out and tell some good stories,” Parth said.

Steinke said that when he heard the news he was on vacation in Phoenix and was alone for the first few days after the incident. He was happy to return to St. Albert to grieve with his friends.

Peter made the trip to Saskatchewan for the vigil on Sunday night to be with the Humboldt hockey community.

Peter and Steinke play hockey for the Melville Millionaires, a team in the same league as the Broncos, and said that next year it will be tough playing against Humboldt.

“There is not going to be a time next year where I don’t think of this. I’m not going to want to play Humboldt when we play. I’m just going to think of this. When we go to Nipawin we are going to go through that intersection and it’s going to hit me, like this is where it all happened,” Steinke said.

Along with feeling the support of the entire global community, Taylor said she and her 15-year-old brother Brett have found camaraderie with others who lost a brother in the tragedy.

Taylor found out about the accident while she was at work and she rushed home to be with her family. The Joseph family drove to Saskatchewan on Friday night not knowing if Jaxon had survived.

“That hope that we had kept us driving for six hours,” Taylor said.

When they arrived at the hospital an RCMP officer pulled the aside and told them that there was a five per cent chance that Jaxon was alive and they were still identifying the bodies from the crash. The next morning the family was taken in to identify his body and Taylor said her heart immediately sank.

“There was no mistaking it. When you see your brother, it is heart wrenching. I collapsed. I fell to my knees,” Taylor said.

Taylor said that she will always remember her brother as the typical middle child who was the “glue” in the family. Taylor said he was a jokester and with only a year and a half between them growing up, he was her partner in crime.

The 22-year-old said that her favourite memories of her brother will always be their summers at Osoyoos tubing and spending time on the beach.

“I think my favorite memories are the summer memories. I think when we go back this summer it will be tough but it will be great because I will feel closer to him,” Taylor said.

The older sister said that the six-hour trip to St. Albert after the accident was a long drive but the family spent the time reminiscing and sharing memories of Jaxon. The family drove through the night and when Taylor looked up she saw green northern lights in the sky.

“The northern lights were green and they were dancing and they were a beautiful Humboldt green. I’m not a very religious person but I think spiritually the boys were up there.”