I like simple and simple is good, although in this technically hyped 21st century, what is simple anymore? I like to think that the Hyundai Tucson CUV is a simple, uncluttered example of somewhat stylish, dependable and easy to use transportation.
0
Jun 25, 2014 12:00 AM By: Garry Melnyk 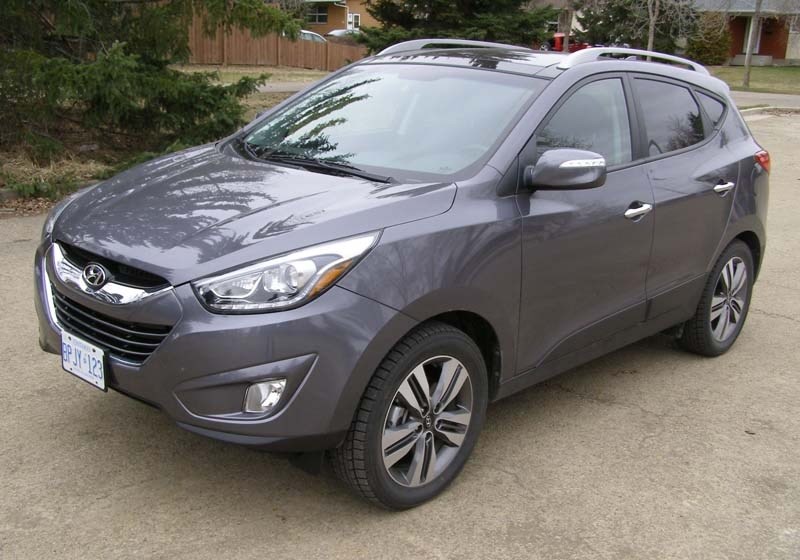 I like simple and simple is good, although in this technically hyped 21st century, what is simple anymore?

I like to think that the Hyundai Tucson CUV is a simple, uncluttered example of somewhat stylish, dependable and easy to use transportation. Others might say the CUV is outdated in design. That wouldn't surprise me as this generation of Tucson has been on the road since 2010. Even so, the popular little vehicle is still good value with a smooth engine, good build quality, comfortable seating and many desirable features for the money. The 2014 Hyundai Tucson top-of-the-line Limited AWD I was given had it all: panoramic sunroof, navigation system, seven-inch high-resolution touchscreen, heated front and rear seats, 18-inch alloy wheels, Bluetooth capability, leather seating surfaces, automatic headlights and a rearview camera, to name just a few goodies. You certainly pay the price for all this: $33,599 before taxes. The inside of the Tucson is a pleasant place to be, with very good workmanship, which we now expect in Korean-built vehicles. Hard plastic is used sparingly. The front bucket seats are comfortable and the rear seats are recline-adjustable, helping to offer good legroom in the second row. Drop the rear seat and you gain a lot of cargo capacity.

For the driver, instruments and controls are large and clear. Everything is easy to operate. The audio controls are mounted on the steering wheel and the audio display is on a large seven-inch touchscreen which also displays the GPS and back-up camera. HVAC controls are lower down on the centrestack and I have no complaints about that. Connecting my Android cellphone was easily done and that’s a plus. One of the features specific to the Limited model is the driver selectable steering. A dash-mounted button allows the driver to choose one of three different steering modes – comfort, normal, and sport. The selections change the level of resistance in the steering wheel, with sport offering the greatest level of feel – a bit of a gimmick and not one that interested me. I just left the setting in normal.

Under the hood, the 2.4-litre direct-injection four-cylinder engine puts out 182 horsepower. That’s more than enough around the city but get up to 120 kilometres an hour and the engine begins running out of steam. Passing on a two-lane highway generally means putting the go pedal to the floor. Once the lower gear kicks in the engine produces a very coarse roar, but gets you moving.

Part of the problem of course is that the AWD model is carrying more weight and that’s why fuel consumption was only 9.7 litres per 100 kilometres for the week I drove the Tucson around Edmonton and St. Albert.

I certainly believe in the benefits of all-wheel drive, but not so much that I would pay extra for it. I’m of the generation that grew up learning how to drive in winter with rear-wheel drive and bias ply winter tires. So I can get around nicely with just front-wheel drive and good snow tires, thank you.

Whether at highway speed or zipping around the city, the Tucson’s suspension offered a very good ride with just the right amount of handling dialed in that you could zip around easy through tight curves. Body lean is minimal and there’s little harshness transmitted through the suspension.

Is the Tucson Limited AWD worth $35,000-plus? If you want to stay small, enjoy all the features offered on larger and more expensive models, then the Tucson is a bargain.

It’s not flashy or trendy in a 21st century way, but would be ideal for a retired couple or as a second vehicle for a young family. I would suggest Hyundai offer a heated steering wheel as an option, however. Nowadays, not having one in a top-of-the-line model just seems odd.

I also think Hyundai and other manufacturers could put a little more colour into their interiors. I’m so tired of black and grey.

The Tucson competes against other popular compact CUVs such as the Mazda CX-5, Ford Escape, Toyota Rav4 and its cousin the Kia Sportage.