Talk to any long-time St. Albertan about the most famous bar in town, and they’ll fondly remember the Bruin Inn. Built in 1929, the local hotel and beer parlour stood on the corner of St.
Aug 10, 2013 12:00 AM By: St. Albert Gazette 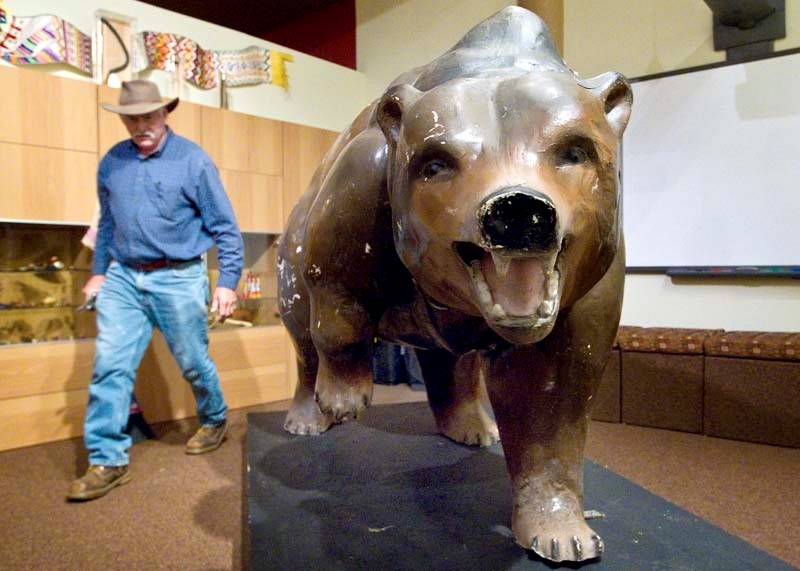 Talk to any long-time St. Albertan about the most famous bar in town, and they’ll fondly remember the Bruin Inn. Built in 1929, the local hotel and beer parlour stood on the corner of St. Anne and Perron streets for 70 years before it was bulldozed in 1999.

What remains of it are artifacts, found at the local MusĂ©e HĂ©ritage Museum – and a bear.

That iconic, fiberglass animal – once looking across the city from the roof of the Inn – has now returned home. Discovered and bought at the Rocky Mountain Antique Mall at Gateway Boulevard in Edmonton, residents are now able to visit the popular mascot at St. Albert’s MusĂ©e HĂ©ritage Museum.

“As a museum part of our mandate is to collect significant artifacts from St. Albert and region and this bear falls into that,” said Ann Ramsden, director of the local Arts and Heritage Foundation.

The bear will also make an appearance at the foundation’s annual Heritage Dinner on Oct. 19, which – coincidentally – is themed after the Bruin Inn this year. The dinner will be held in pub-style, and display other objects from the Inn, such as its entrance sign. After the event, Ramsden said the bear will probably go into storage for a while.

“When we found the bear last week … it makes perfect sense to have that as part of the dinner along with other objects we have from the Bruin Inn,” she said.

St. Albert’s Bruin Inn was one of the city’s best-known social hubs. The hotel offered 16 guest rooms and when the beer parlour was expanded in the late 1940s, it could serve up to 600 people.

Ramsden said one of the things everybody remembers about the inn was that it was one of few places in Alberta where men and women could drink together. She added the inn had a bear on its entrance sign, which later led to the addition of the statue on the roof.

That infamous icon survived the destruction of the inn and spent 15 years on the lawn of a private residence before it re-appeared at the sales auction. It was there that St. Albert resident and bookbinder Barry Bailey discovered it and tweeted a photo of it.

“It was outside the front door and I am walking up and I look and I think ‘gee, that’s a pretty cool bear and I wonder how much it costs’,” he said. “And I look at it and on the side of it they had a little description that said this used to be the bear that sat atop the Bruin Inn.”

The bear was priced at $1,600 but Ramsden said they managed to get it a little cheaper. While it’s missing some of its original brown colour, she added the museum won’t be restoring it but rather keep it in its artifact state.

The Bruin Inn bear will be on exhibit at the MusĂ©e HĂ©ritage Museum at 5 St. Anne St. from now until mid September.