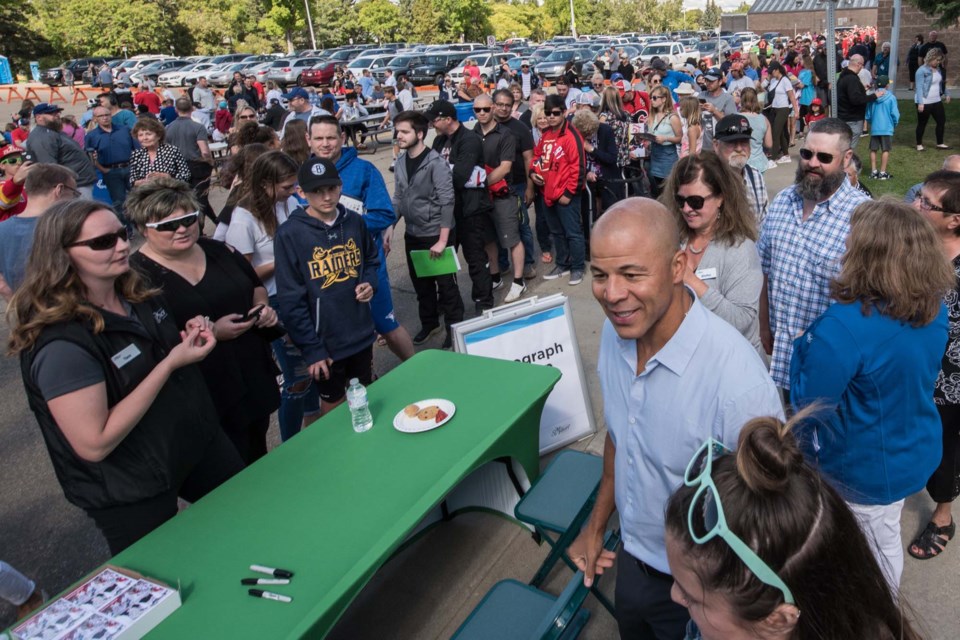 FAN FAVOURITE – Jarome Iginla draws a crowd outside the arena that now bears his name in 2019. JOHN LUCAS/St. Albert Gazette
Jarome Iginla has completed a Hall of Fame career as the recipient of hockey’s highest honour.

St. Albert’s brightest star headlined the 2020 class of inductees in his first year of eligibility for the Hockey Hall of Fame.

“It’s extremely special. You hear the word surreal a lot – we say that as hockey players – but this truly is,” said a beaming Iginla during last Wednesday’s announcement on TSN.

“Just making the NHL was such a thrill. I didn’t dream of making it to the hall of fame and the guys that are in it, being part of that club, it’s a true honour,” Iginla said. “It’s still sinking in.”

The two-time Olympic gold medallist and author of the Golden Goal by Sidney Crosby for Canada against the United States in 2010 was the prototypical power forward with five NHL teams spanning 20 seasons, including 16 with the Calgary Flames and nine as team captain as the franchise leader in numerous offensive categories.

Highlighting his playoff totals of 37 goals, 68 points and 81 games was the 2004 Stanley Cup run of 13 goals to lead all scorers and 22 points in 26 games as the Flames lost the final in seven games to the Tampa Bay Lightning.

The winner of the 2002 Art Ross Trophy as the NHL’s leading point producer with 96 in 82 games and two Maurice “Rocket” Richard Trophies as the NHL’s top goal scorer (52 in 82 games in 2002 and co-recipient in 2004 with 41 goals in 81 games) was a three-time NHL First Team All-Star and Second Team All-Star once as a dominating right winger.

The 2002 Lester B. Pearson Trophy as the NHL’s most outstanding player as voted on by the players, 2004 King Clancy Award for the NHL player who best exemplifies leadership qualities on and off the ice and 2009 Messier Leadership Award, which recognizes an individual as a superior leader within their sport and as a contributing member of society, are among the countless accolades for St. Albert’s hometown hockey hero.
Craig Button, hockey analyst for TSN an former NHL executive, was the director of scouting for the Dallas Stars when the NHL team selected Iginla, an 18-year-old with the Kamloops Blazers, 11th overall in 1995 when the draft was held in Edmonton.

“There is no question that your career just screams Hall of Famer,” Button told Iginla during the TSN broadcast.

“We all know Jarome Iginla the hockey player and it’s no shock to anybody that he is going to the Hall. The minute that he puts skates on and you watched him play you knew he was destined for the Hall of Fame. That’s how good of a player he is,” said the retired netminder and TSN hockey analyst.

“The scary part is that he is a better person. I’m a dear friend and I’m lucky enough to call him a friend. I’ve been around him for 20-plus years and when I think of Jarome, I think Jarome is the gold standard not just for on the ice and the way he conducts himself, but the way that he conducts himself off the ice showing respect to people. He’s got time for people. It’s amazing to see how he’s conducted himself and grown into one of the greatest athletes of all time.

“He’s also one of the most competitive if not the most competitive person I’ve ever met. We all know he is a five-tool player on the ice – score, hit, fight, shoot, skill game, tough game – he led by example so most nights when you’re either on the bench or you’re playing with him, Jarome would set the tone that night, whether it was going to be a rough game or a skill game, and you just fell in behind him and he led the charge so it was impressive,” McLennan said.

Ken Holland, longtime general manger of the Detroit Red Wings and current GM of the the Edmonton Oilers, gained entry in the builder’s category.

Iginla received the coveted “Call from the Hall” from another Flames’ icon, Lanny MacDonald, chair of the Hockey Hall of Fame.

“I had a hard time sleeping the last couple of nights. I’ve been very excited and a little nervous,” Iginla said.  “As a career goes on, you hear people talk about it, so there is kind of that hope (and) later in my career it was definitely hopeful as it went on, but early in my career you’re just trying to stay afloat and be a part of the NHL and it was so much fun.”

The Hall of Fame is the latest glowing tribute for Iginla following his last NHL game on April 9, 2017 with the Los Angeles Kings. The next year, the Flames’ retired his No. 12 jersey and last year Akinsdale Arena was renamed Jarome Iginla Arena in a ceremony that left its namesake to declare: “Receiving this honour made me reflect on growing up here and how truly fortunate I really was.”

Iginla was destined for greatness as a second-year bantam with the 1992/93 St. Albert Eagle Raiders while leading the Alberta Midget AAA Hockey League in scoring with 34 goals and 87 points in 36 games before going to Kamloops and winning back-to-back Memorial Cups , a junior world gold medal with Canada and the 1996 Four Broncos Memorial Trophy as the WHL’s player of the year.

The day after the 1996 season ended for the Blazers, Iginla made his NHL debut with the Flames in game three of the Stanley Cup opening playoff round against the Chicago Blackhawks. Wearing Jim Peplinski’s old No. 24 jersey, he assisted on Theo Fleury’s goal and in game four sniped the first of his 662 goals in 1,635 career playoff and regular season games.

The year before, the Flames acquired Iginla and Corey Millan in a trade with Dallas for Joe Nieuwendyk.
The 1997 IIHF world gold medallist with Canada would also play for the Pittsburgh Penguins, Boston Bruins and Colorado Avalanche before calling it a career with the Kings.

A major influence on Iginla’s journey to the Hall of Fame was the role his grandparents, Rick and Fran Schuchard, had during the early years in support of his parents, Susan and Elvis, who were separated when he was little and was living with his mom in St. Albert.

“My grandparents were there to get me to a lot of sports when my mom couldn’t get there. She tried to make it to as many games as she could and she made a lot of them, but my grandpa was always there. He had a love of sports and passed that on to me. He put me in hockey schools and other things,” Iginla recalled. “I started a little bit late (in hockey). I started about seven years old and around St. Albert, Edmonton area that’s not young so when I started out I was quite a bit behind, but I’ve had hockey schools, I lived next door to outdoor rinks and I had a chance to catch up and really just fall in love with the sport.”

The Paul Kane High School alumnus is also an distinguished member of the Lorne Akins Junior High School athletic wall of fame and was a standout in the St. Albert Minor Baseball Association’s rep program with the Cardinals.

And now, Iginla is with the best of the best among hockey’s royalty.

“I’ve been extremely blessed,” he said of the Hall of Fame honour. “I’m proud of it and so are my family and my friends. It’s very, very special.”