Coun. Ray Watkins, forgetting his mic was on, said he would "vomit" during a resident's presentation in a virtual public hearing.
May 21, 2020 7:00 PM By: Hannah Lawson 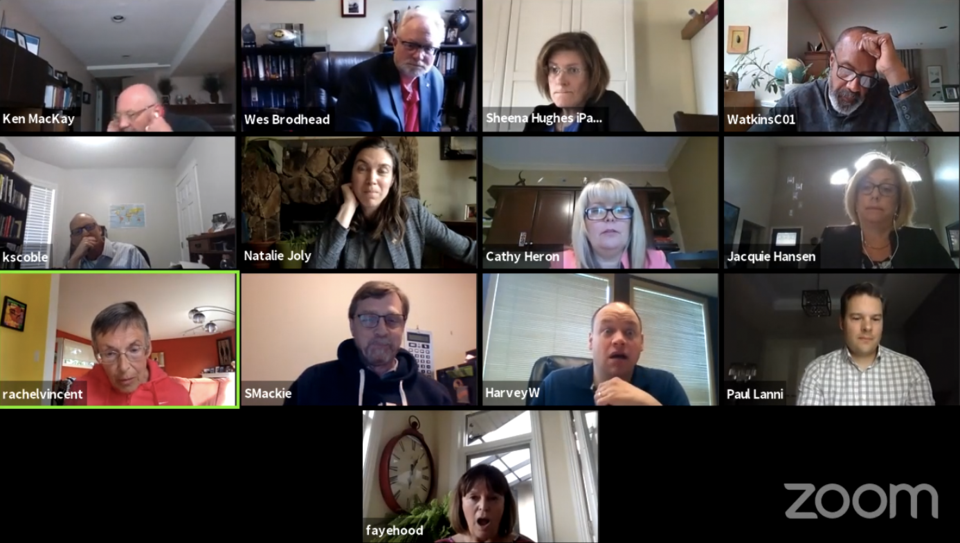 A St. Albert city councillor has apologized for saying he was going to “f---ing vomit” while unknowingly unmuted during the city’s first-ever digital public hearing held over Zoom Tuesday evening.

Rachel Vincent, a St. Albertan of 42 years, had just finished speaking about how she thinks a redistricting application for Averton Homes’ Midtown development in South Riel would damage St. Albertans’ quality of life.

“In fact, it looks like a ploy to bamboozle the public, and push through an unpopular development which can only damage the quality of life of so many St. Albert residents,” said Vincent during her allotted five minutes, referencing a peer sun shadow study the city commissioned.

He later told the Gazette in a text message he was frustrated with the “issue being discussed,” along with the Zoom process itself and home isolating.

Watkins is a land developer in St. Albert.

“Excuse me?” Vincent responded after he made the comment. When Watkins didn’t respond, she told him he needed to mute his mic, and finished her presentation.

The incident occurred at about the 4:15:00 mark in the recorded video of council's meeting.

Other people present in the meeting appeared shocked by Watkins’ comment and seemed to be stifling responses. Coun. Natalie Joly briefly turned off her camera.

Mayor Cathy Heron thanked Vincent for her presentation and apologized for the interruption. Other councillors, including Coun. Jacquie Hansen and Coun. Ken MacKay, also apologized before asking questions about Vincent’s presentation.

Just before Vincent was dismissed from the meeting, Joly requested Watkins make an apology. He had sat silent for the remainder of Vincent’s appearance before council.

“This is very belated, but I think a point of order, a request for an apology is appropriate,” Joly said. “Decorum in these meetings is something that we’ve committed to.”

At that time, Watkins apologized and claimed his comments were not related to Vincent’s presentation.

“(It) wasn’t meant to be heard by anyone except myself. I wasn’t commenting on Rachel’s particular comments,” he said.

Responding to a request for comment from the Gazette, Watkins said in a text message Thursday morning he was “very frustrated with, home isolating, the Zoom process and the issue being discussed, and I made a statement, to myself, expressing my frustration.” He added he was surprised he was not muted.

“Though it was my mistake to not mute myself the words expressed were hurtful to those who heard them and for that I apologize,” he added. “I have already apologized to Ms. Rachel Vincent, council and city staff.”

After Vincent's presentation another resident, Faye Hood, took the mic and began by saying she hoped she would not "get the same response."

Speaking to the Gazette, Hood said it was a "little uncomfortable" speaking on the heels of Watkins' comments to Vincent.

"My feelings are that when citizens come, there should be respect shown, and it's not that easy to come in front of (council). So it would be important to show respect and feel that we are listened to," Hood said. She added the incident does not help advance the notion that residents' opinions are respected.

In an interview, Heron said everyone was really surprised by the interruption, including Watkins.

“All I’m going to say on this is: I apologized to Ms. Vincent immediately for the behaviour, because I do need to ensure decorum and conduct in my chamber, so that is my job and I apologize,” she said. “(Watkins) has apologized both publicly and to her (Vincent) personally, and to council. I think tensions are high because of COVID; he is very remorseful of his behaviour.”

Vincent declined to comment further, saying Watkins apologized both during the meeting and later by email.