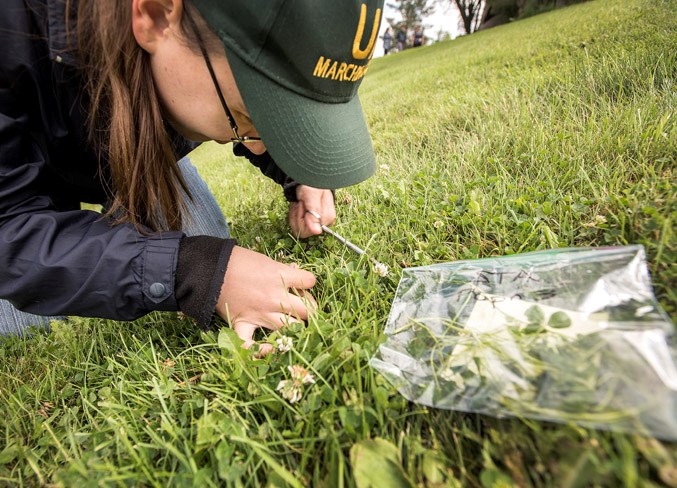 Amanda Hasanovich, a student majoring in biology at MacEwan University, finds a patch of white clover, which is the subject of a study for her and fellow students who help collect samples along the Sturgeon River in St. Albert on Aug. 13.

Student scientists scoured St. Albert Monday for clovers as part of an international study on evolution.

St. Albert residents may have noticed bands of university students scurrying about local fields on their hands and knees in search of clovers.

The Gazette caught up with one such squad behind École Father Jan to find out what they were doing.

“We are sampling for a large international project called the GLUE,” or the Global Urban Evolution Project, explained Karen Christensen-Dalsgaard, one of the two MacEwan University biology professors supervising students.

Cities put great pressure on the species within them, which researchers have recently discovered can kick evolution into super-speed, Christensen-Dalsgaard said. One recent study in Puerto Rico found that urban lizards were better at climbing glass windows than their rural cousins, for example, while another found that New York mice may be evolving a tolerance for fatty acids.

“Mice in New York have adapted to fast food,” she explained.

Cities are the fastest-growing ecosystem on the planet, yet we have almost no understanding of how they affect life around us, said Marc Johnson, the University of Toronto Mississauga biologist behind GLUE.

Johnson said white clover is a good model to study urban evolution as it’s in pretty much every city and we understand how its genes change as it adapts on continent-level scales.

His team previously found that white clovers in Toronto, New York and Boston produced less of the cyanide they use to deter herbivores the closer they were to downtown. GLUE is an attempt to see if this pattern holds true globally and to determine its cause by having teams around the world conduct identical studies of cyanide in urban white clover.

“This is the largest-scale evolution project ever,” he said, with some 185 cities involved so far.

The current theory is that this change is temperature-related, Johnson said. Cyanide deters grazers, but is costly to make. Downtown areas tend to have less snow on the ground than rural ones because of hot buildings and people with shovels. Less snow cover would mean colder soils and more stress on clovers, which would favour those that don’t spend energy on cyanide.

Christensen-Dalsgaard said she and biologist Leah Flaherty were heading up the St. Albert branch of GLUE. St. Albert is one of just three Alberta cities in the study (the others are Edmonton and Calgary).

Monday saw three teams of MacEwan students visit 40 sites between Lions Park and Starkey Road northeast of the Sturgeon Valley Golf & Country Club. On arrival, team members would locate a clover patch, collect and bag one clover from it, and then repeat this process 19 times. Each site took about 15 minutes to survey. Each collected clover had to be at least three paces from any other in order to reduce the odds that they came from the same plant.

Christensen-Dalsgaard confirmed that she had found at least one four-leafed clover during this survey, and said, “I’m going off to buy a lottery ticket!”

Later this month, the students will place the 800 clovers they collect into individual tubes, top them with cyanide-sensitive paper and heat them for three hours, said student Amanda Hasanovich. If the paper turns blue, the clover was of the cyanide-making type. By counting the number of blue papers per site, the students will be able to map changes in cyanide levels in St. Albert’s clovers.

Hasanovich said field work like this gives her a chance to get out of the lab and into nature.

“With this (experiment) in particular, I feel like I’m contributing to something big.”

Christensen-Dalsgaard said this experiment gives researchers a rare chance to study evolution, which normally happens over millions of years and is not easily reproduced. It could also help us better judge where clovers are safest to eat.

White clover provides up to two-thirds of the nectar consumed by urban bees, so its ability to adapt to cities could affect urban pollinators, Johnson said. Studying how cities drive evolution could also help us find new ways to control urban pests such as rats, bed bugs and mosquitoes.

Johnson said GLUE teams would submit their results this year, with an initial analysis to follow in a couple of years.

Visit www.globalurbanevolution.com for details on the GLUE study.