Although the municipal inspection did not name any councillors specifically, the Gazette has learned that the behaviour of three councillors was highlighted in the report.
0
Sep 2, 2017 12:10 AM By: Jennifer Henderson 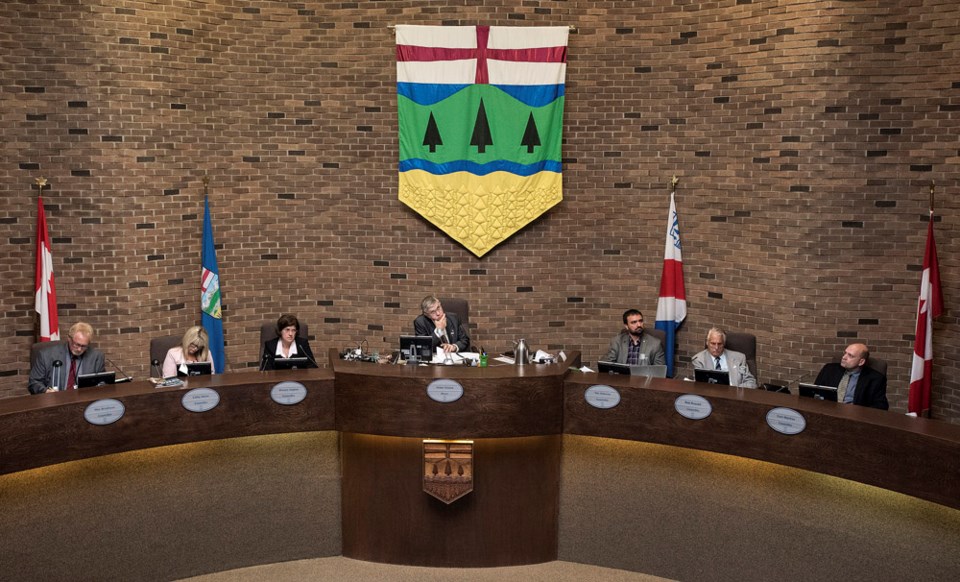 Although the municipal inspection did not name any councillors specifically, the Gazette has learned that the behaviour of three councillors was highlighted in the report. The results of a Freedom of Information Request and previous Gazette reporting show that councillors Sheena Hughes, Cam MacKay and Bob Russell had their behaviour highlighted as “quite improper and irregular.” Mayor Nolan Crouse was also singled out in several instances in the report. According to the results of a FOIP request, Sheena Hughes used “very disparaging language” to her colleagues in front of a Grade 6 class and staff in December of 2013. In a letter sent from the school, the principal said that he found Hughes’ comments to be “not appropriate and seemed to be directed to your fellow council members.” “One student asked if you needed a university degree to be in politics and you replied, in obvious reference to the other councillors, ‘No, you can be as dumb as a sack of hammers and still get in!’” the letter said. On Friday Hughes said that the incident happened during the first two months of her term when she was a rookie councillor. “The entire time I have been on term I have strived to try to do better – whether it's through my communication or interpersonal or understanding how the government process works – I have continually tried to do better,” Hughes said. The principal wrote that another student asked why Hughes ran for council and she replied that she was “bullied by our council four years ago.” According to the letter Hughes also said that she was surprised at “how little of a voice you actually have, as a councillor, in the running of local government.” The principal wrote that during the presentation Hughes positioned her chair away from the rest of the councillors who all sat next to each other. On Friday Hughes said that during the incident she didn’t feel comfortable sitting with the other councillors. “Your negative body language and sarcasm was shocking to the adults who witnessed the presentation,” the letter said. According to the FOIP request, Councillor Cam MacKay sent an email on Oct. 29, 2015 to Crouse and questioned why council should support a “culture of dishonesty” on the city administration team. MacKay’s email followed an email sent by Hughes where she challenged the accuracy of the information council was receiving in a public council meeting and in an in camera meeting. MacKay defended Hughes’ position and asked the mayor what benefit there was to “defend any action that the staff” take. “Rather than chastise someone for telling the truth perhaps council should show some leadership and promote a culture of accountability rather than promote a culture of dishonesty,” MacKay said in the email.

According to previous Gazette reporting, three of the incidents that were carried out by an unnamed councillor were the actions of Bob Russell and Cam MacKay is the councillor in a fourth incident. On Sept. 23, 2015 Russell wrote a post on the blog mybirdie.ca which described members of administration in a “very demeaning manner.” In the post Russell calls the hiring of city councillor Gilles Prefontaine for a senior management role a “joke.” Russell said that he lacked the experience and credentials for the job and since he was hired engineers had left the department. Less than two months later Russell sent an email to Mayor Nolan Crouse on Nov. 19, 2015 where he says that the mayor “must be related to that bimbo” who wrote a letter to the Gazette. “I’ve tried to work with you since being elected but this sleezy (sic) act by you just ended any cooperation. Keep you (sic) head up from now on,” Russell said in the same email. In another incident, Russell was the author of an email to a management employee and threatened him with some physical discomfort. During a council meeting Russell’s motion was defeated and the next day he sent an email taking issue with an answer the then-chief community development officer Gilles Prefontaine gave at the meeting. The email said that Prefontaine had made it sound like Russell had been misleading council. “This is not the first time you have made such a comment,” Russell wrote. “Better not happen again or you will lend (sic) up wearing one of my crutches in a very uncomfortable position.” MacKay was mentioned in the report as the councillor who said in an email that council’s priority session was not worthwhile and was more of a distraction. MacKay said in the email that he considered the session to be “public relations.” The inspection also mentioned two instances with Crouse. One was at a St. Albert and District Chamber of Commerce gala on Feb. 1, 2014 when Crouse gave a speech where he said he enjoyed working with four council members, and implied the other two councillors were not in his preferred group. The report said that the mayor later said that he agreed, “his intended humour and comments were inappropriate.” Crouse was also highlighted for a letter he sent on May 26, 2014 without authorization from council. Crouse sent a letter of complaint to the employer of an individual that he had an issue with. The report said the action was an “over-reach of the office of Mayor." To read the full copy of the FOIP documents click here.