The new city manager is committed to stick to the “interim” part of his new gig. Chris Jardine has been promoted to interim chief administrative officer of the City of St. Albert in the wake of city council firing Patrick Draper.
May 28, 2016 12:00 AM By: St. Albert Gazette 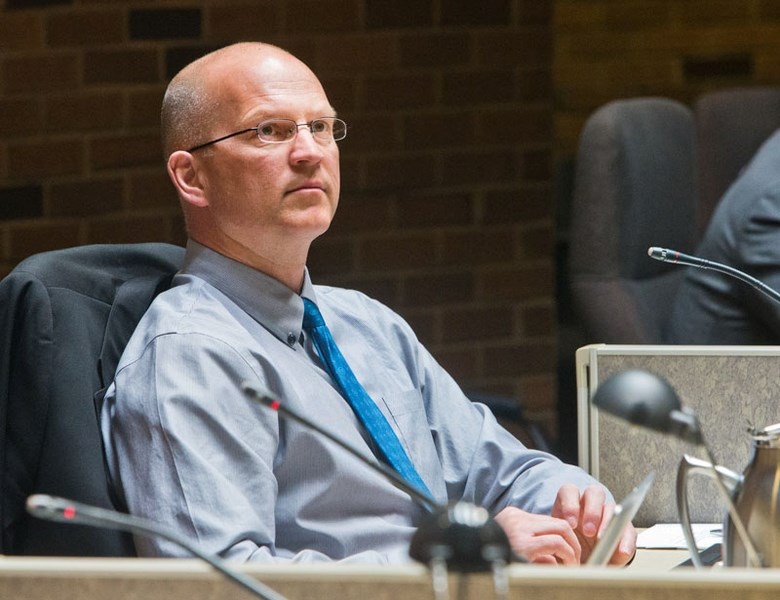 The new city manager is committed to stick to the “interim” part of his new gig.

Chris Jardine has been promoted to interim chief administrative officer of the City of St. Albert in the wake of city council firing Patrick Draper.

This is Jardine’s second time taking on the role on an interim basis for St. Albert. He was appointed interim city manager in fall 2011 after the firing of Bill Holtby.

In an interview in his new office, Jardine said it’s “a little surreal” to be back in the role.

Jardine had just announced plans to retire a few weeks ago. Even though he’s only in his early 50s, he and his wife have plans to do some more “nomadic” type travelling, starting with a road trip to Cabo San Lucas this winter.

So while taking on the CAO job has delayed his retirement plans some, he’s told council the latest he’ll stay is the third week of January 2017.

If a new CAO is hired sooner, and his old position of general manager of community and protective services is filled, he’s also happy to leave earlier than that.

But he has no plans to apply for the permanent CAO position this time.

“None whatsoever,” he said.

Jardine started with the City of St. Albert in late December 2008 as the general manager of community and protective services. His department oversees everything from recreation and parks to policing.

It could take council several months to go through the recruitment process for CAO.

In the meantime, Jardine plans to keep things progressing at city hall.

“There’s a lot of good things that have been started,” he said. He also wants to make sure the new permanent city manager has an easy transition into the corporation.

He’s not surprised to be tapped as interim CAO again. He knows the corporation, has done the interim role for St. Albert before and also had several years of experience as CAO in Devon.

Jardine has essentially spent his entire career in municipal government, even when he was young and getting hired to help run municipal sports facilities like ice arenas or ball fields.

He went to school to learn about recreation administration and officially started his career in Three Hills, eventually ending up with Devon for 18 years before coming to St. Albert.

Now he’s a resident of St. Albert. He’s got a lifelong love of being active – part of how he ended up in recreation administration. He and his wife have gotten into hitting the road in an RV, and, he joked, he got his motorcycle licence as part of his 50th birthday mid-life crisis.

In the first week of the transition, he said staff have been extremely supportive of his new role. His calendar has exploded, and he’s getting to spend a lot of time dashing between different floors at St. Albert Place.

In his nearly three decades in municipal management roles, he’s experienced a variety of different councils.

He’s told council he’ll be working with each of them to help them articulate the different items they are trying to move forward.

Once council has made a decision, he said, it’s staff’s job to “get ’er done.”

“I can help, and I can also get out of the way,” Jardine said about being in one of the hot seats when it comes to council proceedings.

When it comes to the public or groups approaching him as CAO, he said he tries to listen to the issues people bring to him.