Kading hangs up her hat 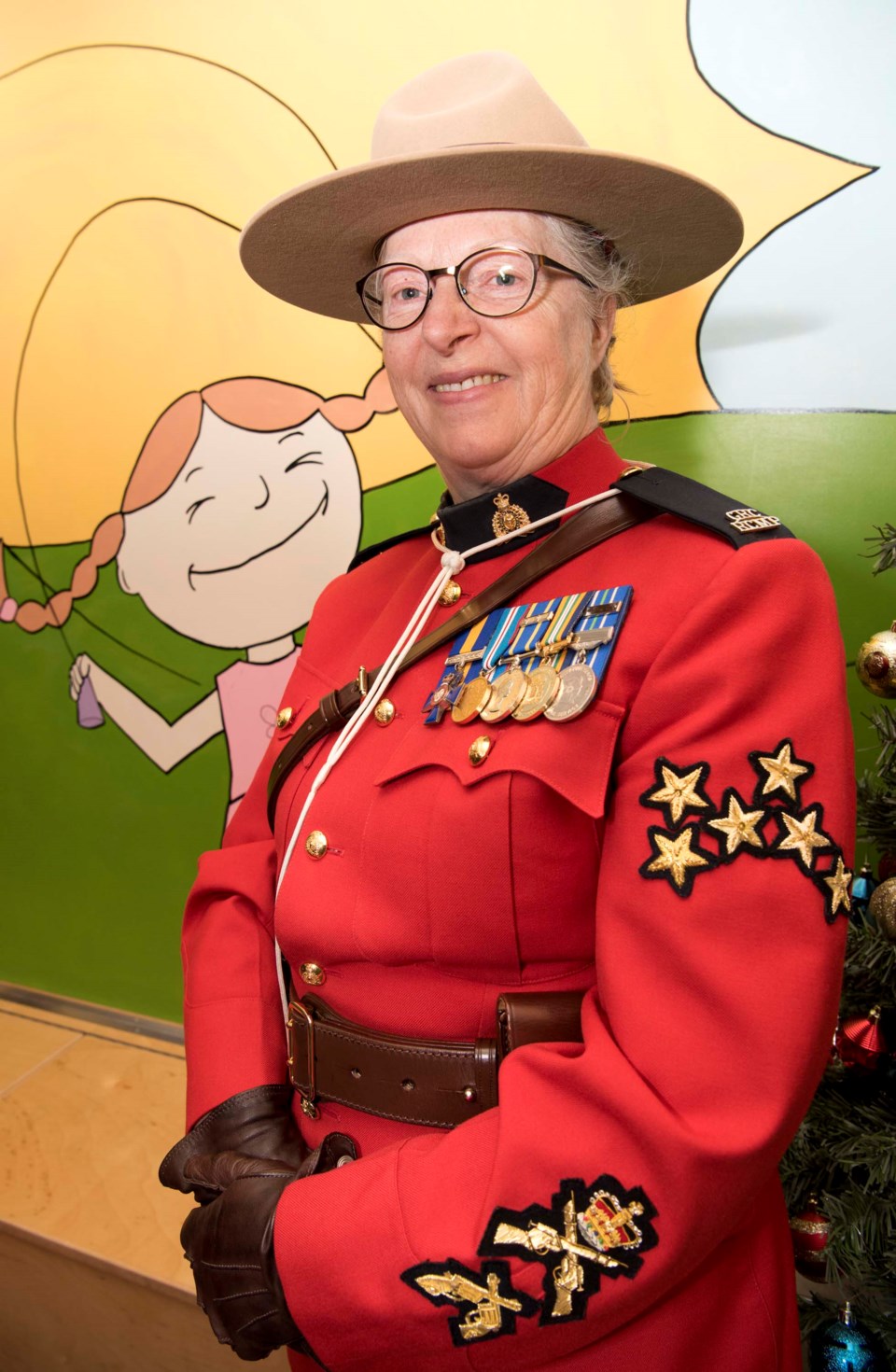 THE FRIENDLY FACE – Cpl. Laurel Kading had her last day on the job Tuesday as a member of the RCMP after 35 years of service, much of which was spent in the St. Albert/Sturgeon region. Kading was recognized by the St. Albert Public board last month for her compassionate support of students. Here, she is shown in the Robert Rundle library just prior to supervising a D.A.R.E. graduation. Two D.A.R.E. grads gave her spontaneous hugs shortly before this photo was taken.

Midway through the Gazette’s chat with Cpl. Laurel Kading last week at Robert Rundle, two overjoyed students ran up to her. Both were former students of hers in the Drug Abuse Resistance Education (D.A.R.E.) program. One was there for that night’s graduation ceremony, while the other had rushed over to say hello when she heard Kading would be there.

Kading might have been on the job and in her full dress uniform, but she was happy to take time out to give them both a big hug.

To those who know her, this reaction isn’t a surprise.

“Laurel has such a good heart,” said Bellerose principal Jyoti Mangat, who has worked with Kading many times over the years, and it’s easy to relate to her as a person.

“For me, the uniform kind of becomes invisible, and I’m talking to a mom or a grandma.”

Kading, 57, has been the face of community policing here in St. Albert since 2008 and was on patrol throughout Sturgeon County for 16 years before then. Tuesday was her last day on the job – she’s retired after 35 years with the RCMP.

It’s a bittersweet moment, she said – she’s leaving a career she loves, but she’s also looking forward to having more time to spend with her grandkids.

“I’m still a young person, I’ve still got energy, and I know I’ll be looking for what’s the next challenge.”

Growing up on a farm five miles from Hartney, Man., Kading said she told her parents she wanted to be an RCMP officer when she was 12 years old.

“I felt it was a job where you could help people,” she said, and she had seen the police do just that often in her neighbourhood.

Kading said she was also inspired by a case where two officers, one of whom was a woman, were shot in nearby Virden, Man.

Kading started out as a summer student with the RCMP in Russell, Man., and soon grew to love investigating crimes and pulling over drunks. Graduating from Brandon University with a degree in botany, she earned her red serge at the RCMP academy in Regina in 1985.

After a one-year stint spent guarding embassies in Ottawa, Kading said she and her husband Doug were dispatched to Drumheller.

“It’s a great place to be,” she said of it, and she still remembers how you could stand by the Welcome to Drumheller sign and see nothing but badlands, only for the whole town to rise up before you as you drove past the sign down into the valley. She and her three daughters still visit it regularly.

“We laugh and say they’ve got dinosaur dust in their blood.”

Kading said she moved to the Morinville detachment in 1992 and spent more than a decade patrolling the county region. She found the small-town atmosphere fit her better than big-city Ottawa.

“I like working where I can walk in and talk to the mayor,” she said, and where people say “hi” to you as you walk down the street.

“That’s the kind of policing I enjoy.”

Kading started moving into community policing at this time, teaching adults about what cops did through a Citizens Academy and working with a local Venturer Scouts group for five years.

Kading remembered leading those Scouts on a five-day canoe trip from Athabasca to Whitecourt around 2005. The group had to contend with boat-flipping rapids and a furious storm that toppled buildings in Smoky Lake, but also got to experience a side of Alberta few ever see.

“One day, we were canoeing along and a whole herd of elk came down off one side and swam across the river in front of us,” she recalled.

“They just looked at us like we were no threat to them.”

Kading said the big thing for her was to see the youths grow as people during the journey.

“It was really neat watching them learn to be leaders of the trip.”

Kading said she took a promotion to corporal and came to the St. Albert detachment to work on community policing. Over the years, she’s biked in the Bellerose Bikeathon, co-led the RCMP Youth Academy, taught legions of students the D.A.R.E. program and helped community members secure their homes through the 9 PM Routine.

“If we can find programs that empower the community to be a part of preventing crime in simple ways that are manageable, I love those kinds of projects,” she said.

Mangat said Kading was instrumental in bringing the Violence Threat Risk Assessment Protocol to this region, and would always know exactly what a student or family in crisis needed.

“What I have always been so impressed by with Laurel is her humanity,” she said, as well as her optimism and sense of humour.

“It matters a lot when you’re dealing with something tough.”

St. Albert Public Schools presented Kading with a certificate of recognition last month in appreciation of her work.

Renée Lukie, supervisor of student services for St. Albert Public, said Kading was truly committed to the ideals of collaboration and community policing.

“It’s more than just a job. It’s more like her calling.”