Many St. Albert residents may have found an information card about the library plebiscite in their mailboxes last week.
Aug 26, 2017 8:17 AM By: Jennifer Henderson, Local Journalism Initiative reporter 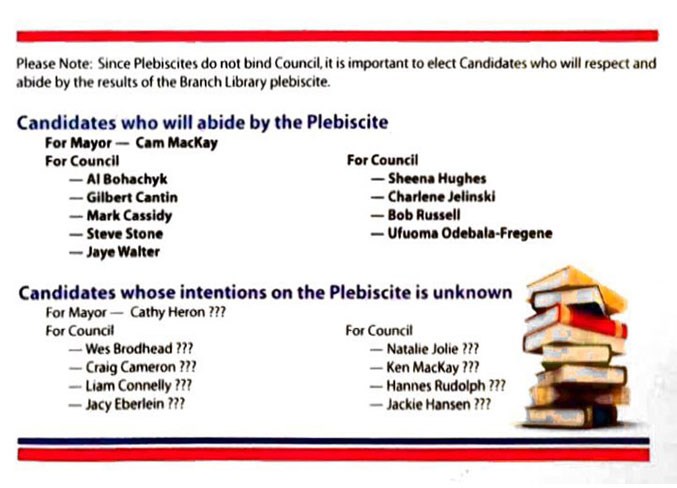 Some council candidates are frustrated by this card being circulated because they feel it misrepresents their opinions.

Many St. Albert residents may have found an information card about the library plebiscite in their mailboxes last week. A card has been distributed to some households in the city that provides a slate of candidates the card says will abide by the results of the library plebiscite and ones whose “intentions on the plebiscite is unknown.” The card does not note who created it or distributed it. Not all declared candidates are listed on the card. Stan Lozinski said he was one of 20 to 30 people on a committee who got together to make the card. Lozinski said that it was the same group that had the petition against the branch library borrowing bylaw that have created and circulated the cards. Lozinski said that the group that created the card included all but one of the candidates listed as those who will support the plebiscite results. However, four of the ten candidates reached by the Gazette said they had nothing to do with making the card. Jaye Walter, Bob Russell, Cam MacKay and Ufuoma Odebala-Fregene said they were not involved in creating the card. Although they said they were not contacted by the card creators, the four candidates said they have publicly stated they would abide by the results of the plebiscite. The other six candidates listed as abiding by the plebiscite were not available to comment. Lozinski said that he didn’t reach out to the people on the “intentions unknown” side of the card because their positions were public knowledge. “We knew from their Facebook posts their opposition to what we were doing. We didn’t need to ask anybody. We already knew,” Lozinski said. Mayoral candidate Cam MacKay said that although he was not the one who created the cards, he has been handing them out to other city council candidates to distribute. “For a grassroots organization I think that they have just about done absolutely everything they can to be fair with their message, to be fair to every candidate out there as to where they stand and to encourage them to take the same position that they have on the issue which is to, namely, let the public decide,” MacKay said. MacKay said that he doesn’t have a problem with anything that Lozinski’s group is doing and he is glad to get their support. Some candidates on the “intentions unknown” list of the card said that they were frustrated by the card. Hannes Rudolph was upset with the card because he said he had made it very clear on his social media and through conversations that he would abide by the plebiscite results. “The first thing that I felt was frustration and anger because I had made great efforts to ensure my position was known on the ballot question, yet I was still lumped into the bottom group,” Rudolph said. Rudolph and many other candidates said that they were not pleased with the card because it made the election seem as if it was a one-issue campaign. Odebala-Fregene said that she distributed the cards before but will not distribute them again. Odebala-Fregene also said that while she will abide by the plebiscite, she thinks the card distracts from all of the other issues that she considers important in the race. Many of the candidates on the “intentions unknown” list agreed that St. Albert is more complex than one election issue. Those who shared that view with the Gazette were Natalie Joly, Jacquie Hansen, Rudolph, Wes Brodhead, Liam Connelly, Jacy Eberlein and Cathy Heron. Mayoral candidate Heron said that she has never been asked by anyone what her stance on the plebiscite results would be. “No one has ever asked me my position on how I would interpret the results of the plebiscite,” Heron said. “I’m just waiting to hear what the results are. I think it’s inappropriate to preconceive my position on the plebiscite question without asking me directly.” Connelly said he never authorized his name to be on the list and said that he is running independently and is not part of any camp. “I have already told them that I want my name removed. They do not represent me or what I stand for,” Connelly said. MacKay said that Rudolph’s name would be blacked out from the bottom of the list in all future cards. Lozinski said that if they reprint the cards there would likely be no list of “intentions unknown” included and it will just be a list of candidates who will abide by the plebiscite results.