Once upon a time in this country a person who "made it" generally chose between three luxury makes: Cadillac, Imperial and Lincoln. Cadillac and Lincoln had the strongest sales and loyal, repeat buyers.
0
Aug 16, 2017 12:00 AM By: Garry Melnyk 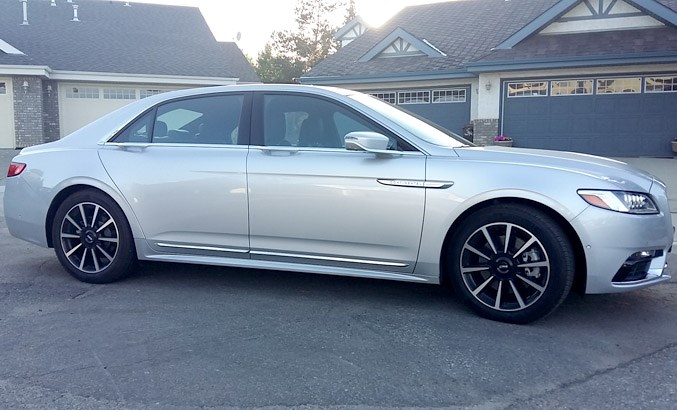 Once upon a time in this country a person who "made it" generally chose between three luxury makes: Cadillac, Imperial and Lincoln.

Cadillac and Lincoln had the strongest sales and loyal, repeat buyers. This began to unravel over time as German cars came into vogue, then Japanese luxury cars. At about this time loyal Cadillac and Lincoln owners began dying off. So both companies began rethinking their product line as the 21st century was approaching. Cadillac chose to chase the Germans – and have done well doing so. Lincoln was less focused for a few years. But that has now changed and the new Continental sedan shows where Lincoln designers are going.Lincoln is promoting "quiet luxury" as a guiding philosophy behind development of the 2017 Continental.

The Continental certainly is luxurious and quiet, whether you're running errands around town or on a long road trip at triple digit speeds. On the outside you can certainly see some Bentley in the exterior shape. But hold on, there are also some styling cues paying homage to the Lincoln Continentals of the early sixties when Lincoln was beginning to hit its stride.

Outside or inside designers and engineers have done a commendable job. A light press on the beltline integrated door handles and the doors pop open, and then close with a nice electronic thrum. Get settled and with the flip of a switch you turn on the massage function included with Lincoln's optional 30-way seats. A nice touch for a long highway trip as Mrs. M and I found out during our week with an AWD version of the Continental. The seats not only massage but have individual thigh adjustments to prevent leg cramps. Elsewhere in the passenger cabin the standard leather and wood trim are handsome. The back seat is cavernous. The twin panel moon roof brightens the interior cabin letting in the sunshine and big, blue sky. The instrumentation layout is well executed. But push button gear selectors? To me it cheapens the Continental experience, but that's just me. The HVAC system works as you would expect keeping everyone cool inside on hot summer days. I had to check out the seat heaters and found they will do the job giving Continental drivers and passengers with very warm butts on cold winter days.

If you travel and take lots of stuff, the trunk is a cavern, easily swallowing suitcases and more. Should you need extra room and won't be transporting anyone in the back seat, the rear seatback folds down. On the road it is as comfortable as you would expect. Composed at speed and cruises nicely without any effort at 130 km/ph with power to spare. The twin-turbo 3.0 litre V6 puts out 400-horsepower. No lack of ponies for easy passing. The engine sound and upshifting of the tranny when you floor it does detract from the quiet one enjoys inside however. Wasn't expecting that in a car so hushed. A minor quibble, but a little detail I would say Lincoln might consider resolving. Even so, overall the Continental should meet the needs and tastes of its intended clientele. Fuel consumption likely isn't much of a concern for the typical Continental buyer. But just so you know, the new Continental even with twin turbos still manages 9.5L/100km at 110 kph. Drop the speed to 100 and you can get 8.9L/100km.

The starting price on the Continental Reserve AWD is $60,500. Start piling on the options like the $3,000 Technology Package, and the numbers start rising. The technology package gives you auto dimming rear view mirror, park assist, adaptive cruise control, a 360-degree camera, pre-collision assist with pedestrian detection and lane departure warning. My Continental had all the above and more for a grand total of $76,950 including $1,900 for destination and delivery. Still far below in price than some German competitors. But then not all of those German luxury cars offer massaging seats. That's the icing on the cake you might say. Read more of Garry's Auto Talk reviews here