Some 36 lemonade stands popped up in St. Albert in late August to raise money for the Stollery.
Sep 11, 2019 11:00 AM By: Jennifer Henderson, Local Journalism Initiative reporter 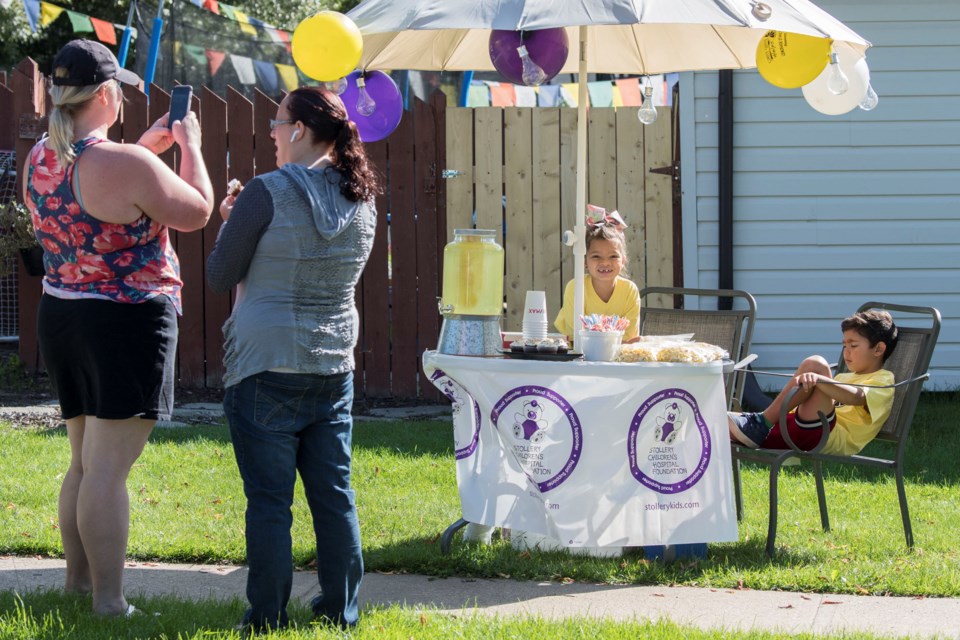 On Aug. 26, some 36 lemonade stands blanketed the city as young kids tried their hands at running their own business to raise money for the Stollery Children’s Hospital.

Lemonade Stand Day is a fundraiser run by Simply Supper to help raise funds for the Stollery Hospital Foundation.

And those hundreds of stands were able to raise $257,220 to buy five Giraffe CareStation Omnibeds for the Stollery NICUs: Two for the new Stollery NICU at the Sturgeon Community Hospital in St. Albert, which is slated to open in the fall, and three for the Royal Alexandra Hospital.

The beds will provide a warm and safe environment for northern Alberta’s smallest babies to continue to develop and access for both doctors and parents to be able to interact with their preterm infants. Each bed costs $58,000.

Monita Chapman, owner of Simply Supper and chair of Lemonade Stand Day, said this year, the sixth annual event saw a record 561 stands set up and staffed by 2,000 children. Thirty-six of those were in St. Albert.

“We totally exceeded everything that we thought we would make and the kids are really happy. We're super pumped with how much we've raised,” Chapman said.

And for Chapman and the kids, the event is about more than raising money – it's also about building a community.

This past Sunday, Chapman and the gang at Simply Supper hosted an event at the Edmonton Corn Maze to reveal the amount of money raised. All the kids who participated were invited to come and enjoy the afternoon with their fellow philanthropists.

“It was pouring rain on Sunday at the corn maze and 1,100 people still came out to hear the announcement, so it just shows the community that we've created around lemonade stand day,” Chapman said.

The wrap-up event was held at the corn maze, which is cut into the shape of Dr. Patchup, the Stollery bear.

At the event, Chapman said she got to meet the kids who participated in the day and saw that the day had inspired them to continue to help others in their community.

“So many kids came up to me at that event and are like, ‘I'm going to do something at my school this year.’ And they're going to do some sort of social justice or philanthropic work through their school and that's exactly what lemonade stand day is more about than the funds raised,” Chapman said.

This is the sixth year the organization has run the event and Chapman said it has been so successful because of the connections the kids made with their families and neighbours.

Chapman said the event is fun for families because it allows the kids to showcase their creativity.

“You can see the kids' creativity come out in something like this. When you're trying to raise children to be philanthropic, you don't want to overwhelm them, right. So we just start small. This is something small they start with, and then you see that the creativity that comes out and the families work together.”

Chapman said when she thinks of the success of the fundraising initiative it brings her to tears. This year the group raised $40,000 more than they did the year before.

On top of donating to the Stollery, the organization gave $2,500 to Santas Anonymous to thank them for the free use of their storage and they were also able to donate two bins of toys to the program.

Lemonade Stand Day will run again next summer in August.