City and county residents mobbed an open house on the Heartland Transmission Project this week as they lobbied hard to keep a proposed power line out of their backyards.
0
Jun 17, 2009 12:00 AM By: Kevin Ma 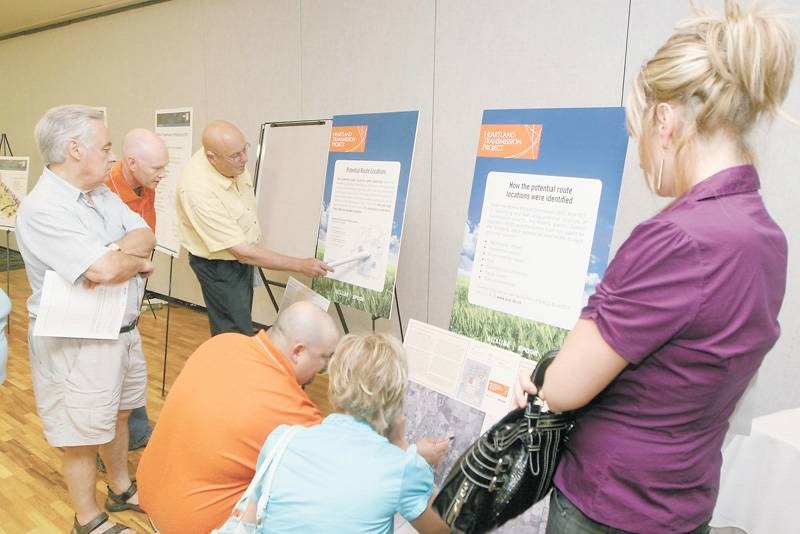 City and county residents mobbed an open house on the Heartland Transmission Project this week as they lobbied hard to keep a proposed power line out of their backyards.

About 250 area residents attended an open house held by AltaLink and Epcor officials at the St. Albert Inn Monday. The open house, the first of seven this month, featured information about a proposed 500-kilovolt power line meant to bring electricity to the industrial heartland near Fort Saskatchewan.

Line developers have proposed four routes for the project, said Epcor spokesperson Tim le Riche, and have not settled on any one of them. Comments collected at the open houses will determine the route they choose.

The City of St. Albert probably won't support the yellow route, said city manager Bill Holtby, as it runs through an area marked for annexation in its intermunicipal development plan.

"You'd be running a high [power] transmission line through an area of future residential development," he said, which would take up valuable land. The line's towers — proposed to be about 55 metres tall — would also affect the area's skyline. His staff will issue a formal recommendation to council on July 6.

Not in my backyard, say locals

Robert Lema, whose family has lived west of St. Albert on the banks of the Sturgeon River for 110 years, questioned why planners were even considering the blue route, given the green and yellow ones use existing transportation utility corridors.

"People live out in those farms and acreages," he said. The blue route would occupy valuable farmland and potentially cut down century-old trees near his home. "Why are they establishing this new [utility corridor] when they have an existing one already?"

Gail Helgason, who lives in Oakmont, said the yellow route would compromise the natural and aesthetic value of River Lot 56. "Having huge towers right on the side would certainly negatively affect the area," she said, as would construction.

Janet Spiller, who can see the existing 44-metre tall towers along the Henday from her house, was one of many people concerned about the electromagnetic fields produced by the power lines. "We have grandchildren, and we don't want to expose them to anything harmful."

Tests of existing 500-kilovolt lines suggest that a person standing right under the proposed line would be exposed to a 52-milligauss magnetic field, said David Mildenberger, an electrical engineer with AltaLink. Hairdryers crank out about 300 milligauss at close range; acute health effects crop up at 830 milligauss.

The International Agency for Research on Cancer (a division of the World Health Organization) concluded in it 2008 World Cancer Report that there was "no convincing biological or biophysical support" for an association between power lines and cancer. Some studies had suggested a greater risk for childhood leukemia in kids living close to the lines, but these were inconclusive, and suggested a very small number of additional cases.

Several attendees asked if the lines could be put underground.

The province is currently studying that option, le Riche said, and the line developers would consider it when they prepare their plans. "Underground lines cost up to 10 times more than overhead ones," he noted.

The line planners would pick one of the four routes this summer and present it at a second open house this fall, le Riche said. If approved by the province, it would be up and running by 2013.

Five more open houses on the project are planned for this month, including one this Wednesday in Morinville. For their times and locations, call 1-888-441-7192.