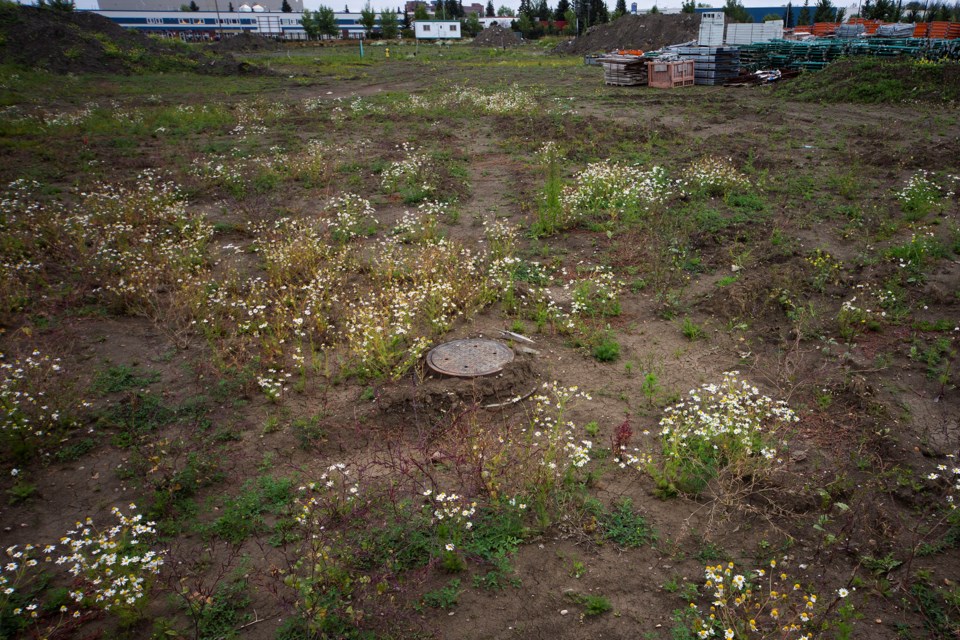 A 4.5-star hotel coming to the Campbell Business Park is now slated to be open by the end of 2020. CHRIS COLBOURNE/St. Albert Gazette

A state-of-the-art hotel slated to open for business in the Campbell Business Park this year is now set to be open by the end of 2020.

In the beginning of the summer last year, shovels broke ground for the seven-storey luxury Chalton Hotel near Century Casino.

Kota Construction controller Dave Dyrbye said the company originally planned to start building the concrete structure in the spring but work was delayed on another project in the city.

Since the groundbreaking ceremony, Kota has installed services for the site and drilled more than 100 piles into the ground.

“Now we just really get going on building the structure itself. We’re hopeful to get going on that sometime within the next two months,” Dyrbye said. “All we have to do is get the manpower over there and get going with it.”

The 4.5-star, 141-suite Chalton will be equipped with a pool, an exercise room, restaurant and large convention room, along with two breakout rooms.

Kota also has designs on a “family-friendly” hotel on another site in the Campbell Business Park, which has been in the works since Kota purchased the Chalton hotel site.

“We have not done up any designs for it, there’s no timeline for it, we just believe there’s a market for it,” Dyrbye said. He added it will be a great option for hockey teams staying in St. Albert for tournaments, being within close proximity of Servus Credit Union Place.

In 2014, St. Albert's economic development department conducted a report that showed there is demand for more hotels in the city. During last year's ground-breaking ceremony at the Chalton, Mayor Cathy Heron said more space was desperately needed in St. Albert to host weddings, conventions, meetings and events.

Kota also has plans for another Chalton Hotel, to be located in the Lakeview Business District on the city’s west end, but Dyrbye said that development is on hold for the undetermined future.

That is because St. Albert has yet to draw up an area structure plan (ASP) for the area, which would involve servicing the district. Services would have to be brought underneath Ray Gibbon Drive west to the Lakeview Business District, Dyrbye said, and developers cannot afford to front-end that cost themselves.

ASPs are plans municipalities draw up in order to guide development of land, including density and major transportation routes.

In January 2018, Lovatt Planning Consultants submitted a partial ASP for Lakeview to council on behalf of Kota Contracting and land owner Terry Hodgson, which would be paid for by the proponents. At the time, projections had the business park established by mid-2019.

The partial ASP would have allowed development to take place before the city completes its own full ASP for the Lakeview Business District.

However, Dyrbye said the city has not provided them with any timelines for the ASP.

“It’s frustrating – we do not like that timeline at all. We would much prefer to get going on an ASP, you know ASAP, and continue on with it,” Dyrbye said. “We have users who would love to be in that area.”

“We’ve had a number of meetings to try and get going on it, but nothing’s come to fruition.”

Work on updating the city’s municipal development plan (MDP) has put a hold on developing the Lakeview ASP, because administration feels the ASP should be a product of an updated MDP.

In November, city council put $110,000 toward a geotechnical report, a historical resources overview and an environmental assessment for Lakeview Business District. With those reports in hand, the city should be ready to look at servicing the land after the city’s MDP is complete in 2020.

The City of St. Albert was not able to respond with an update on the Lakeview Business District ASP before press time.