When St. Albert city councillors took their six-week summer break, Mayor Cathy Heron decided not to let it go to waste. Over the course of the recess, Heron visited waste-processing facilities elsewhere in the province to get a feel for what St.
Aug 31, 2018 3:17 PM By: April Hudson 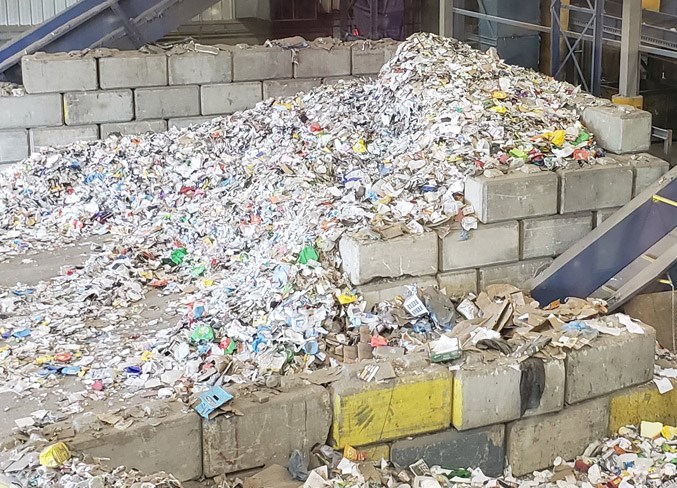 St. Albert Mayor Cathy Heron toured Edmonton's material recycling facility – one of two such facilities in the Edmonton region – this summer, along with other faciliites in the province. She says plastics are becoming an increasing problem as there is nowhere to send them to.

Over the course of the recess, Heron visited waste-processing facilities elsewhere in the province to get a feel for what St. Albert could be doing better.

Changes are coming to the world of waste, egged on by China's recent decision to stop taking much of the plastic it used to accept. St. Albert will start to see its own changes in September, when councillors are expected to look at measures to address our own flawed system and limit the types of plastic that end up in the recycling bin.

One of the biggest issues we face – and one of the reasons China chose to limit what it would accept – is contaminated recycling, Heron said. For example, if you take a high-value recyclable such as paper and throw it in a bag with a dirty soup can, the paper gets contaminated.

On Sunday, holding her regular Facebook Live Q&A titled "Coffee with Cathy," Heron said the recycling facilities she visited this summer are beginning to stockpile plastics because there is nowhere to send them.

"You are going to see, probably in early September, a restriction on what we will accept in our blue bags – because right now, we have nowhere to put it," she said.

Tim Hortons cups, clamshell food containers and glass are just a few of the types of items the city is looking at cutting from its recycling program.

Details of the proposed changes are slated to be revealed for the Sept. 10 meeting of the governance, priorities and finance committee, which all councillors are a part of.

Heron told the Gazette on Wednesday glass will probably be cut from blue bags because there is no market for it, and when glass breaks it contaminates things such as valuable paper products.

She acknowledged that the changes will mean St. Albert will be going backwards in its waste diversion rate.

"I'm super proud of St. Albert's diversion rate – it's got to be one of the highest in the province. So it's sad to see it go backward, but it's going to go backward for everybody," she said.

The changes could also bring higher fees – something Heron isn't thrilled about.

Heron has long been interested in waste management, right from her university days when she worked at a wastewater treatment plant in Devon to recent years when she has sat on several waste-related boards. Her personal interest in the subject coincided this summer with the urgent need for St. Albert to face down its plastics problem.

"With the changes in what China was accepting, I just realized that what we thought were good environmental practices here in the Western world, potentially aren't," Heron said.

"I feel like there's an opportunity with this change for some industry here in North America, Canada, hopefully and better yet maybe even Alberta, to step up and start finding new technologies to use some of these plastics ... St. Albert is looking at this very closely."

The incoming changes for St. Albert come just after the city won bronze at the Solid Waste Association of North America industry awards for its curbside waste education program.

Heron said she doesn't think education is the problem, but she wants to start a conversation to get St. Albertans thinking about how they can be garbage-conscious.

"I think there's some residents that need to take a little bit more responsibility," she said.

After all, it just takes a peek into the waste bins at Servus Place to see how often people throw the wrong things in the wrong bins.

"It's so frustrating ... Their busy lives (are) costing everyone more money," Heron said.