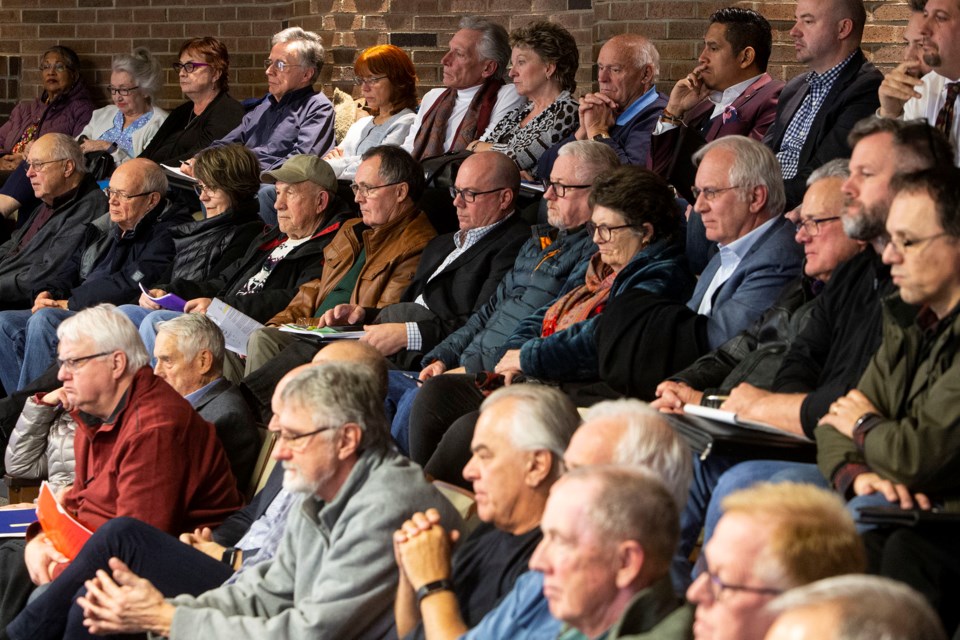 Residents showed up in droves for a public hearing Monday on the city's proposed municipal utility corporation. After hearing from nearly a dozen of them, city councillors postponed their decision to Dec. 16. CHRIS COLBOURNE/St. Albert Gazette

St. Albert’s mayor is ready to move on to the next step in turning the city’s utility department into an Epcor-like, for-profit corporation, in spite of residents opposing the idea at a public hearing on Monday.

Just over 50 residents packed city council chambers for the public hearing on St. Albert starting a municipal utility corporation (MUC), with 10 presenting to council on the matter. Overwhelmingly, residents expressed outright opposition or serious concerns about the proposal.

Mayor Cathy Heron said she has to rely on experts the city contracted to draft a case for the MUC and cannot bend to “political pressure.”

“Weighing his skills over some of the comments, I have to take the expert. That’s my job; I can’t bend to political pressure when I have a completely qualified expert telling me that this is a good idea. That’s the hard part."

No decision followed the public hearing, and council decided to revisit the issue with fresh eyes at their Dec. 16 meeting.

If the city approves forming a utility corporation, the next step would be drafting a shareholder’s agreement, which would be key in setting the vision and direction for the MUC, along with how much control city council retains.

Heron said she is “really willing” to move on to the shareholder's agreement step.

For the mayor, her takeaway from the public hearing was the city needs to “do a better job” of explaining and educating the public about an MUC.

“It’s pretty complicated and it’s hard to understand, so I think we need to do a better job,” she said.

Coun. Jacquie Hansen said the public hearing did not bring a good balance of voices, and she would prefer to see a decision pushed back into the new year.

“That public hearing didn’t make me dead set against this. It was a handful of people that show up quite often, and they are also a lot of the same people that write to the Gazette,” Hansen said. “While their voices are important, there are other voices out there in the city we just haven’t heard from yet.”

She added it is “very rushed at this point” and she hopes if council takes more time before making a decision, more voices will come to the table in 2020.

“I think we have some concerns to alleviate, and if we can’t alleviate concerns, then it’s a no-go,” Hansen said.

Coun. Wes Brodhead said council needs to take residents’ concerns into account, but also “encourage citizens to lift their vision up” to what could be.

“I want to be open to the concerns of the people; they are the ones we answer to,” he said. “But I refuse to buy into the idea that, because they may vote against me two years from now, that I won’t do what I believe is best for the community.”

Brodhead added change is hard and the easiest thing to do politically is nothing, and St. Albert became what it is today because of “doing the things that need to be done.”

“It’s like driving – if you keep your eyes in the ditch, where do you think you’re going to end up? We need to not only address their concerns but invite them to take a look at the opportunities that might come,” he said. “There is a real risk in the lost opportunity as well, and there’s a cost to that.”

Coun. Sheena Hughes said the public hearing revealed the community is not in favour of the idea.

During the hearing, Hughes repeatedly asked why St. Albert could not expand its offering of services through its existing utility structure, thereby eliminating the need to duplicate administrative and board costs. Hughes said administration’s answer was “not accurate” that the corporation is needed to respond quickly to opportunities as they arise. The city can move at lightning speed at times, she said.

“The corporation saying it's more nimble just means it has less oversight, and less oversight is often not a good thing,” she said.

Rather than starting a utility corporation and duplicating administrative costs, Hughes said she would like to see individual business cases for each of the proposed new services and see if they can be delivered under the city’s umbrella.

Heron said it is not necessary to form a corporation to offer new services, but she does not think there is “political will” to take on these sorts of ventures in municipal government.

Traditional forms of revenue – fees, fines and grants – are falling, and in order to maintain service levels in St. Albert without raising taxes, the city needs to expand the revenue pie, Heron said. That includes looking at an MUC.

Council is not handling their own money in deliberating an MUC, Coun. Ken MacKay said, and he is not sure he has the “risk appetite” to try forming a utility corporation.

“I’m dealing with potentially taking on that risk if this does not work out,” he said. “I’m not there yet, but I’m not saying I couldn’t be convinced of this. If not now, then maybe in future that this might be a better way to go.”

MacKay questions whether a St. Albert MUC would have the skill set and expertise to effectively compete with other “big fish” in the region, such as Epcor.

“Will they even tolerate us, and will they always be just one step ahead?”

Coun. Natalie Joly said the public hearing indicated residents are as interested as council in seeing a "fiscally responsible plan."

"(There was) a lot of interest in making sure that we’re not going into a plan blind, and also making sure it’s environmentally something that sits with their values."

Joly said she is looking forward to debating the issue on Dec. 16, and added she does not think council will recieve any new information between now and then.