Edmonton could become the food capital of Canada if it taps into the power of urban agriculture, suggests a recent mayoral forum.
Feb 7, 2017 11:00 PM By: Kevin Ma 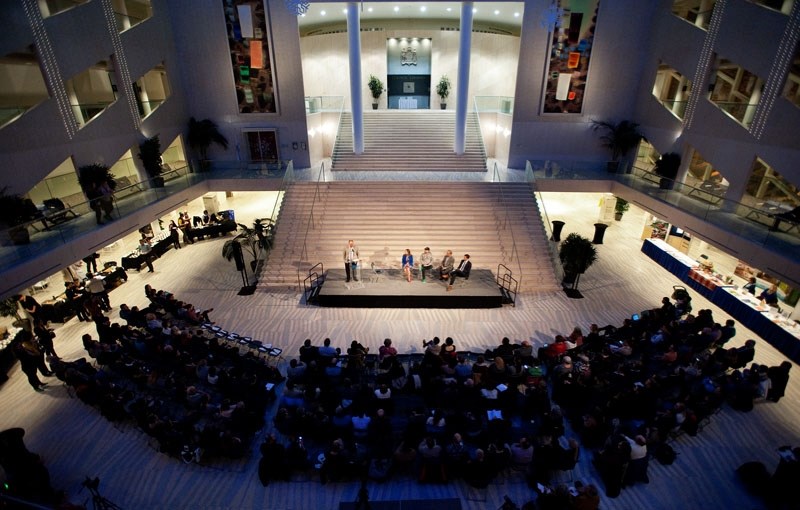 CULINARY CONVERSATION – Kevin Jones of the University of Alberta

Edmonton could become the food capital of Canada if it taps into the power of urban agriculture, suggests a recent mayoral forum.

About 250 people were there to hear them talk about local food and agriculture and to enjoy free wine and gourmet appetizers. The talk was the kickoff to the Cultivating Connections Alberta Regional Food Systems Forum held last weekend.

"I see value-added agriculture as a big economic driver opportunity in this region that we haven't cultivated very well," said Flynn, the mayor of Sturgeon County.

"We have a big basket of opportunities there that we really have to pursue."

Morinville's Champion Petfoods is a great example of value-added, said Holmes, that town's mayor. They get all their ingredients from within 50 kilometres of Morinville and ship products to 80 nations through Edmonton.

When Flynn said the region had to do more to create a common brand to market its local agricultural businesses, Iveson, Edmonton's mayor, asked the crowd, "What do you guys thing about 'Canada's Food Capital'?" Many cheered in assent.

There's a lot local governments can do to unleash innovation in local food, Iveson said. Edmonton had just four food trucks eight years ago before it decided to change its policies to better support them. Now it has about 140, and could very well be the food-truck capital of Canada.

The four leaders spent about two hours discussing food policy and what local food meant to them.

Morin said that to his community of Enoch, local food was about culture. Alberta's First Nations were only recently introduced to Western foods such as flour, and today grappled with many health concerns related to diet. He now seeks to lead his community back to its traditional dietary roots.

"Picking berries, hunting moose – those are medicines for us."

Holmes also cited a need to reconnect with the past when it came to food, saying that there was a "lost generation" of people today that did not grow up tending gardens or preserving food.

"This is a skill my children need to learn, but I'm not able to teach them."

It's important for urban dwellers to have that connection to their food, Iveson said. His city was implementing an urban food and agriculture strategy and supporting community gardens to try and restore this connection.

When he mentioned how Edmonton was struggling with how to bring in edible gardens, Holmes suggested he use her town's Incredible Edibles initiative as an example.

"It's become a great way to bring local food and conversations about that back to our community," she said of the program.

Holmes said one key lesson they've learned is the importance of education. Morinville tried to distribute fresh vegetables through its food bank, but had to throw out most of them – it was easier for residents to cook Kraft Dinner than figure out what to do with a rutabaga. Her community has now started cooking classes and posted educational signs to help residents learn how to use plants from Incredible Edibles.

On the question of land fragmentation, Flynn said he was excited that the recent Capital Region Board growth plan would protect some 250 quarter-sections of farmland over 30 years – equivalent to St. Albert, Spruce Grove, Sherwood Park and Bruderheim combined, Holmes noted.

That plan will also save governments about $5 billion in infrastructure costs, Iveson said.

"Density and growing up more and out less is good policy all around beyond food systems."

Canadians have the opportunity to solve local and global problems by developing the local food economy, Iveson said.

"From the backyard planter to our long-term job strategies, I think this touches all of us."