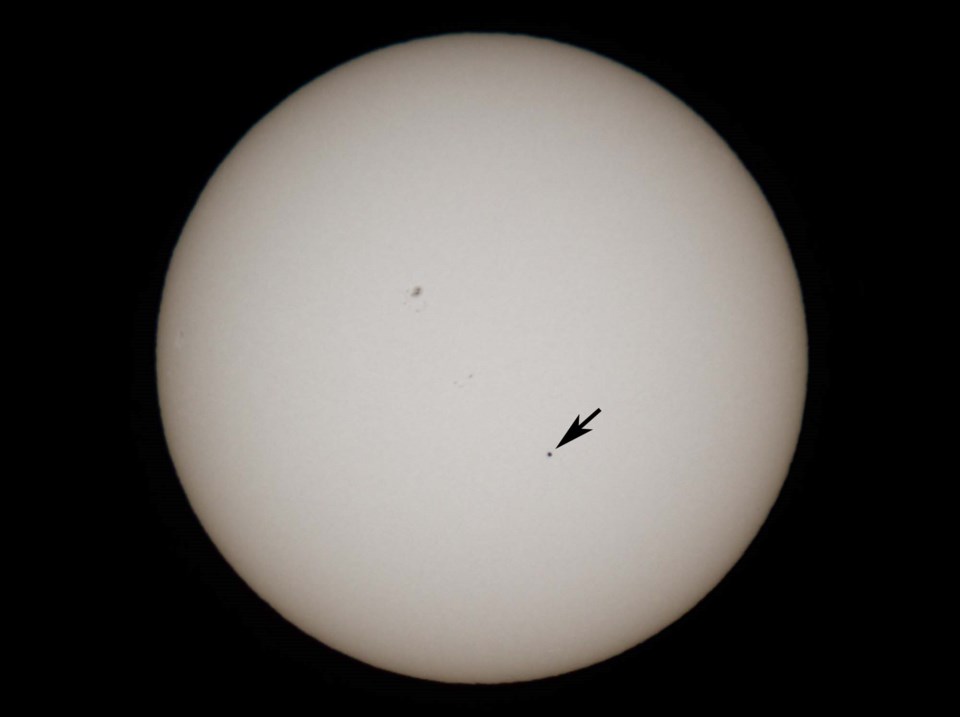 IN TRANSIT – St. Albert residents will get to see the rare sight of Mercury silhouetted against the sun Monday morning. The last time this happened (shown here) was May 9, 2016. An arrow has been added to this photo to show the black dot that is Mercury. MURRAY PAULSON/Photo

St. Albert astronomers will be squinting skyward this Remembrance Day to see a sight they won’t see here again for 30 years.

The planet Mercury is set to pass between the sun and the Earth this Nov. 11 between 5:36 and 11:04 a.m. Edmonton time, reports earthsky.org.

This is known as a transit, and it will let us see Mercury in silhouette as it travels across the face of the sun, said Frank Florian, senior manager of planetarium and space science at the Telus World of Science in Edmonton.

St. Albert astronomer Murray Paulson said he plans to set up his telescope just outside of town Monday to catch the event, but is prepared to motor down to Medicine Hat if that’s what it takes to get a clear view.

“Mercury and Venus are the only planets in the solar system that can come between the Earth and the sun,” he said, and Venus only does so once every 120-odd years or so. He caught the two previous transits for Mercury this century (2006 and 2016), and is going for three in a row.

“It’s probably the last time in my life I’m going to get the opportunity,” he said, as the next transit visible on this side of the world isn’t until May 7, 2049.

Mercury orbits the sun every 88 days but only crosses Earth’s orbital plane at two points, Florian said. When that crossing happens when the Earth is in the right spot, we get a transit. These transits typically happen in early May or mid-November, depending on the state of the calendar.

The transit itself doesn’t look like much due to the size difference between Mercury and the sun, Paulson said – you’re seeing an itty-bitty black dot. Still, it’s a chance to see the planet closest to the sun.

“It’s a really harsh world,” he noted, as depending on where you are, it’s either hot enough to melt lead or near absolute zero (430 C to -180 C, NASA reports).

Mercury is the smallest planet in the solar system and is a bit smaller than Earth’s moon, Florian said. You won’t be able to see its colour Monday, but it’s generally greyish and covered in craters.

Paulson said you’ll need eye protection such as No. 14 welder glasses or a solar filter to view the transit safely, as you’ll be looking at the sun. Binoculars or a telescope are a must, since Mercury is so small.

If the weather’s right, Florian said the science centre would have experts and telescopes available at the RASC Observatory in Coronation Park for the public to view the transit from 8:30 to 11:15 a.m.

“This is sort of a once-in-a-lifetime opportunity for a lot of people,” he said, so be patient if there’s a line-up for a telescope.

Florian said the next two transits of Mercury will be in 2032 and 2039, but you’ll have to be on the other side of the world to see them.