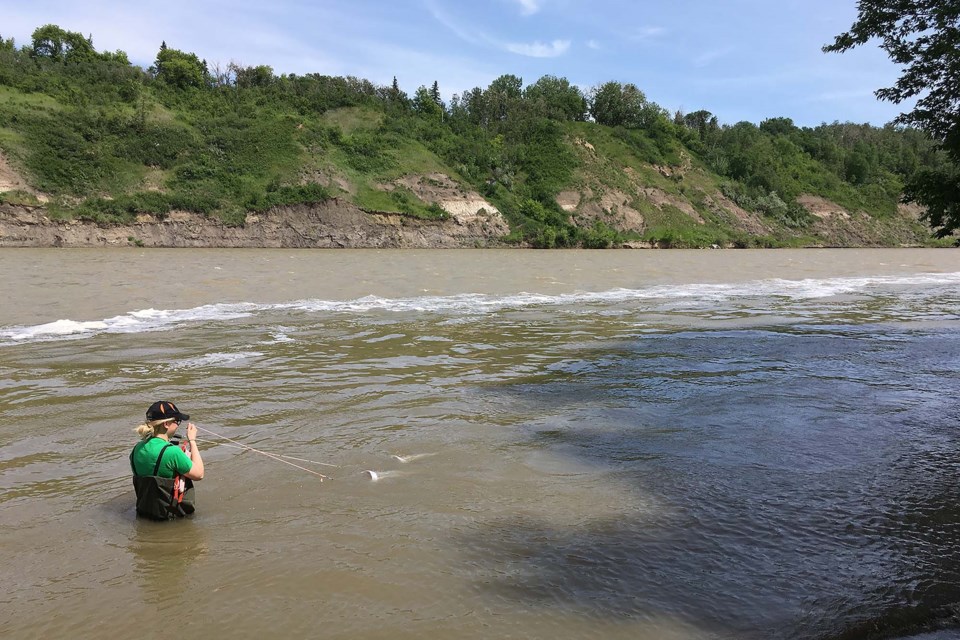 FISHING FOR PLASTIC — MacEwan University student Taylor Bujaczek samples microplastics from the North Saskatchewan River in 2017. This work was part of a recently released study that found most of the microplastic pollution in the river likely came from clothing. MATTHEW ROSS/Photo

A new MacEwan University study has confirmed that the North Saskatchewan River is infested with microplastics, most of which come from the clothes on our backs.

Microplastics refer to plastic and anthropogenic particles smaller than 5 mm found in the environment, said Peter Ross, an ocean pollution expert at the University of British Colombia who co-authored a paper on microplastics in the Arctic Ocean a few days before Matthew’s study. Researchers suspect these small bits of plastic could poison or starve small creatures such as plankton by carrying pollutants or plugging up guts, similar to how bigger chunks affect birds and turtles.

“We don’t know a thing about what they might do to humans,” Peter said, but the concern is that they could irritate the bowels or enter the bloodstream and deliver hormone-disrupting chemicals.

Previous studies have found microplastics everywhere from the highest peaks to the ocean’s depths, so Matthew said finding them in the North Saskatchewan was no surprise. Still, virtually no one had looked at microplastics in western Canadian freshwater, and his team wanted to determine a baseline of contamination for future studies.

The study saw teams use plankton nets to sample the river at eight spots in the Edmonton region in 2017. They filtered out everything that wasn’t made of microplastic and analysed the samples with microscopes and lasers.

Matthew said the team found the river water contained about 26 bits of microplastic per cubic metre, or less than one per litre – not a lot, and in line with what had been found in eastern Canada, but there really shouldn’t be any microplastics in that river.

While researchers have yet to determine a safe level of microplastic exposure, Matthew said the level found in the North Saskatchewan probably isn’t a huge human health issue, especially since Epcor would remove much of it at its treatment plant.

“You’re far more likely to be exposed just by the air around you than through drinking water,” he said.

The team found about 68 per cent of the microplastics in the river were fibres. Most were blue, clear, or black, and either polyester or cotton.

Contrary to their predictions, Matthew said the team found no significant change in microplastic concentrations as they moved down river, not even in the samples taken downstream of the Gold Bar Wastewater Treatment Plant. (Other studies had found wastewater plants to be significant sources of microplastics.) This suggests the microplastic pollution in the river did not come from any one source, and might be from stormwater runoff or the air.

Based on their composition and colour, Matthew said most of these microplastics came from textiles and clothing shed through wear and washing. Peter’s study came to a similar conclusion.

“We need better designed products,” Peter said, adding he is working on a study of which types of textiles shed the least when washed.

Previous studies have found that one load of laundry can release up to 20 million fibres into the environment, Peter said. People could help prevent this pollution by washing with cold water and liquid detergent, or installing lint traps, which can catch up to 95 per cent of microplastics from laundry.

“If we continue to use plastics, we’re going to continue to see an increase in (microplastics) in the environment,” he said.

Matthew’s study can be found at bit.ly/3bIOYMc. Peter’s is at go.nature.com/3qmRifR.

St. Albert Housing Society gets $120K for affordable housing pilot
AYS: 5 days for the homeless ... from the comfort of your own home
Alberta start-ups lead the way in COVID-19 testing and treatment
Country singer-songwriters team up for "Looking for a Lockdown With You"