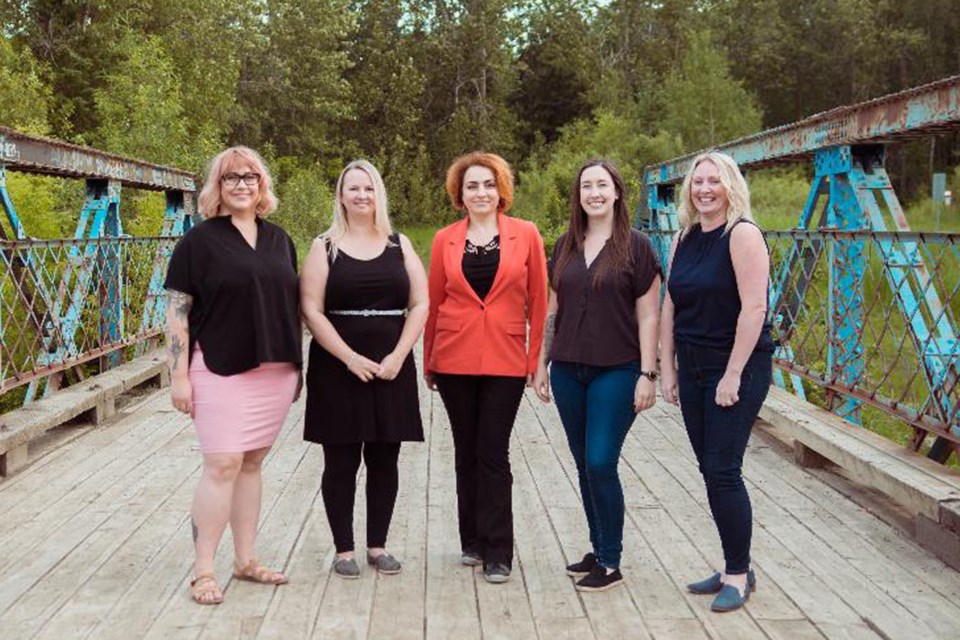 The St. Albert Community Midwives are looking to create the first birthing centre in Alberta outside of Calgary and Edmonton. In the photo are Janelle McLeod, left, Jennifer Thomson, Anna Gimpel, Taryn Campbell, Lynne Hill and Katharine Langille.

St. Albert could soon be home to the only birthing centre outside of Alberta’s two main centres, should the St. Albert Community Midwives be successful in their bid to find a suitable location.

The midwives presented to city council Sept. 16 about their need to find a new location to run their services out of, saying the current clinic in the Tudor Glen commercial area does not meet growing demand for their services and has become unaffordable.

Anna Gimpel, a registered midwife with St. Albert Community Midwives, said their team has expanded from three midwives when they opened in 2015 to five today. On average, they serve 120 clients per year and will serve 200 next year.

In addition to rent increasing three times since 2015, Gimpel said giving birth in a commercial space is uncomfortable for women, and they would like instead to run a birthing centre out of a residential building, owned or leased.

“We support choice of women and if they choose to have babies at home, or at a home-like centre like a birth centre, they would feel uncomfortable giving birth between other businesses,” she said. Gimpel said currently the midwives do not do births in their clinic.

St. Albert MLA Marie Renaud spoke in support of the midwives to council, saying the midwives play a “vital and valuable” role in the region, but with considerable growth comes challenges. She added it is possible the midwives would need to relocate out of St. Albert into another community, if they cannot find a suitable location for a birthing centre in the city.

“Losing the midwives in the community would only put more pressure on the Sturgeon Hospital and other healthcare providers in the region,” Renaud said.

“I am confident council can work with the midwives to make a birthing centre in our community possible. St. Albert is an impressive leader in this province, and this is an opportunity to once again to demonstrate that incredible leadership,” she added.

Expectant mom Kate Vogelaar also spoke in support of the midwives, saying she has already delivered two babies with midwives and hopes to deliver her third in a birthing centre.

“I love St. Albert; I think it’s very family friendly, very forward thinking and I think having a birthing centre here would actually put St. Albert even more on the map,” Vogelaar said.

The challenge midwives have in creating a St. Albert birthing centre lies in the details of the city’s land use bylaw (LUB). Currently the LUB would prohibit the midwives running a birthing centre out of a residential home.

Gimpel said the midwives are hoping the city will work with them over the next year – before their lease expires Nov. 1, 2020 – to find a way to accommodate their birthing centre.

Having a birth centre in St. Albert would open up the possibility for expectant families that live north of the city as well. Gimpel said pregnant women living in places such as Morinville, Westlock and Clyde cannot currently have home births because they live too far away from a hospital if complications were to arise.

Council questioned administration on what would need to be done and were told the birthing centre would require ‘spot zoning’ and might involve creating a specific definition within the LUB for birthing centres. Any application to amend the LUB takes approximately six months and would require a public engagement period.

Mayor Cathy Heron said the process would take time but the midwives had been heard.

“I do think we’ve heard you and we’re going to do what we can to see if this works in the City of St. Albert,” she said.