Missing senior found on her bed during Citadel fire

After five hours of waiting, there was still no sign of Connie Clark's mother on the evacuation buses.
May 12, 2021 5:16 PM By: Jennifer Henderson, Local Journalism Initiative reporter 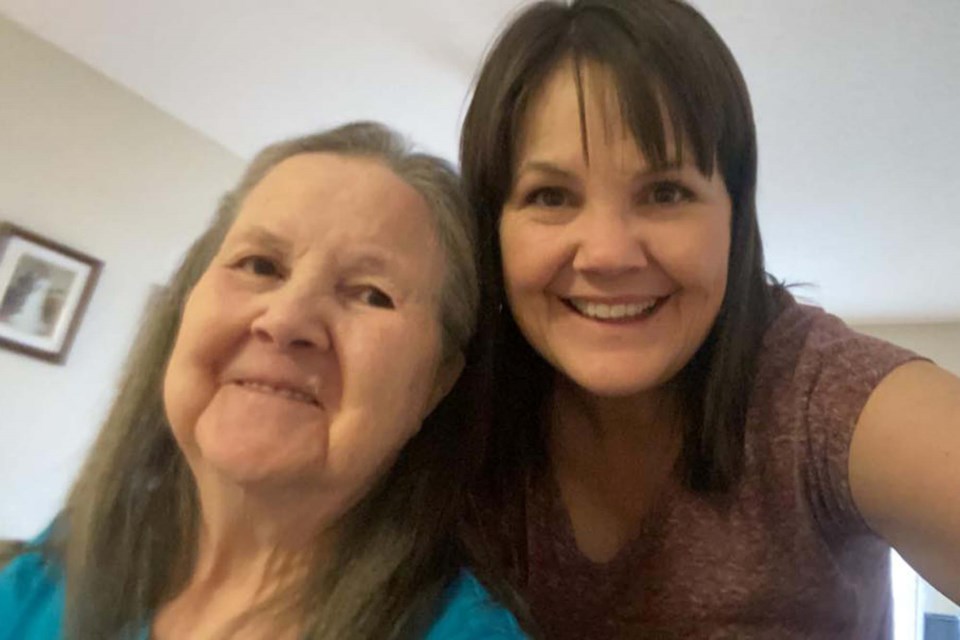 For more than five hours Connie Clark didn’t know where her mother was the night of the Citadel fire, but the 87-year-old was eventually found sitting on her own bed in the burning building.

On Thursday night, the Citadel Mews West seniors’ centre went up in flames, and Clark’s mother Margaret Sigvaldason, who suffers from dementia, was nowhere to be found.

From around 8 p.m. when Clark first learned of the fire until after 1 a.m. when her mom was found she had a constant knot in her stomach, but remained hopeful until her mom was finally located.

“I was very, very scared. I was doing everything in my power to remain intact ... because  I'm not going to be a basket case when she gets there. So it's not about me, it's about them. So I wanted to make sure I was as strong as possible,” Clark said.

She tried to remain calm during a high-adrenaline mission to find her mom.

Clark first heard about the fire through a friend, who saw posts on Facebook, and Clark rushed from her house in Parkland County to the Citadel complex to try to track down Sigvaldason.

“It was a feeling that you can’t even describe, because we had no information. Nobody was calling us.”

When Clark arrived at the Citadel complex, throngs of traffic blocked her path to the building. Eventually she made her way to the group of seniors who had been evacuated and started looking for Sigvaldason, but all Clark saw were the long-term care residents from the building next door.

Sigvaldason was living in the building that caught fire in the independent-living area, even though she had dementia. The buses were transporting long-term care residents away from the scene.

Clark and her husband then rushed to the St. Albert Inn to wait for the busloads of evacuees to be brought in from Costco, where they had originally been evacuated to.

“I tried to look through everybody to see if she was there and of course we didn't see her in there,” Clark said.

The family asked for information on the location of her mom, and volunteers and staff tried to help track her down. The family was repeatedly reassured that everybody had been safely evacuated.

As the hours ticked by and more buses started rolling in, Clark was pretty sure her mom wouldn’t be arriving on the buses with the long-term care residents and wondered if she might have already been brought to the St. Albert Inn and was in a room sleeping or if something else had happened. But Clark kept waiting, not knowing what else to do, and with every bus that came in she hoped to see her mother's face.

A member of her mom’s home-care team and a staff member at the Citadel called during the evening, asking if Clark was with her mom, which Clark said was stressful.

“That gave me a little bit of a panic,” Clark said.

As the clock ticked down to midnight, buses kept coming in without her mom.

“I think a couple of buses came, and I watched everybody get off and mom was not there and I'm looking at my husband and going ‘What's going on? I don't understand why she's not here yet.’ ” Clark said.

“It’s just so much going on and I'm getting very worried, but I want let people do their jobs. I don't want to interrupt them and this is a huge emergency, a lot of chaos.”

Not on the bus

After midnight, a lady came into the crowd gathered at the St. Albert Inn and announced that the last bus had arrived. The whole crowd, knowing of Clark’s search for her mother, turned and looked at her.

“I just start bawling, I'm just like, I cannot believe this. I told you guys all night long my mom’s not here. This isn’t making any sense,” Clark said.

But Clark said she knew she had to stay as calm as possible because she had to continue to search for her Sigvaldason.

Worried, Clark took solace knowing the fire was burning on the opposite side of the building as her mom’s suite.

As volunteers and staff ventured off to find Sigvaldason, Clark told them her shy and quiet mother wouldn’t have gone far.

On top of that, her mom, at 87, wouldn’t have had the strength to wander through the community for five hours after the fire, so Clark knew to look close to home.

Clark was told the Citadel building had been swept twice, but she had a suspicion and asked them to look one more time.

Finally, relief came at 1:15 a.m., when Clark received a text that her mom had been found sitting on her bed. The daughter was not surprised.

“My mom is scared. She doesn’t like to leave her room. She’s a very shy person. Even with all the stuff going on, her safe place is her home. Her safe place is her bed. When there's so much commotion going on around her, if nobody has her by her hand, and it's comforting her, then she is going to go to bed,” Clark said.

When the duo were finally reunited Clark was “beyond happy” and so was her mom.

What happened in the five hours Sigvaldason was missing, or how she was found sitting on her bed, is still unknown.

Clark asked her mom what happened when they were reunited and Sigvaldason said she must have fell, which is why the ambulance came. But Clark said Sigvaldason typically goes to bed around 6 p.m. and could look out her window and see all the emergency vehicles, and the emergency lights in the building were going off, so Clark knows her mom didn’t have a relaxing night.

“The only bright side of dementia is that they don't remember what happened,” Clark said.

Sigvaldason came out of the fire physically unscathed and a check by doctors determined she didn't suffer from smoke inhalation or any other complications from the fire.

Clark hopes the criteria for qualifying for long-term care will change after her ordeal with her mother, as Sigvaldason somehow did not meet the qualifications to live in the long-term care home.

Clark said the list of qualifications, including whether the person will wander off; or if she is a danger to herself.

“What I'm advocating here is that the other question they need to add to their list is ‘Will she self-evacuate?’ Because I could have told them three years ago that the answer to that would be an absolute no,” Clark said.

“My mom does not have the wherewithal to do that.”

If Sigvaldason had lived in the side of the building that was on fire, Clark said the outcome of that night would have been very different.

Sigvaldason is set to move into a long-term care home.