Parents of children with disabilities say they need certainty of supports
Aug 5, 2020 11:00 AM By: Brittany Gervais 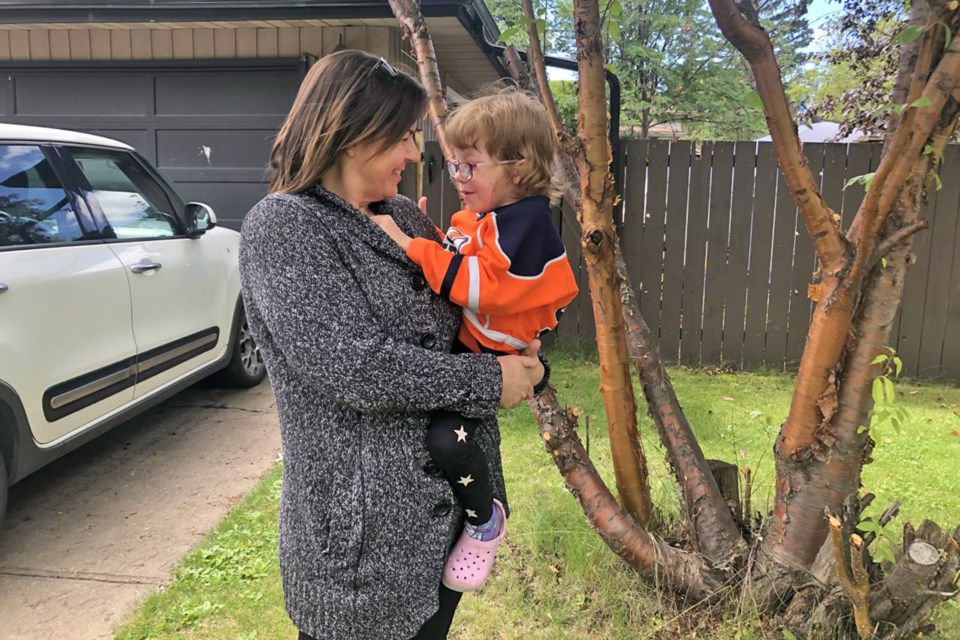 Melenie Carter is the mother of seven-year-old Sophia, who was born with a rare genetic disorder. Melenie said she wants assurances her daughter will get the support she needs to go back to school. BRITTANY GERVAIS/St. Albert Gazette

St. Albert parents of students who have disabilities say there are too many questions left unanswered on the plan for school to start up again in the fall.

The Alberta government announced last month that public school students across the province will return to class this fall. On Aug. 4, the province said it would require masks for students in grades 4 to 12 and all school staff.

It outlined public health guidelines and enhanced safety measures for students and teachers amid the COVID-19 pandemic, but parents in St. Albert are still having mixed feelings about kids returning to classrooms.

Melenie Carter is the mother of seven-year-old Sophia. Sophia was born with cardiofaciocutaneous syndrome, a rare genetic disorder that affects many parts of the body and results in delayed development and intellectual disability.

When it comes to school, Sophia needs a team of specialists to help her in the classroom – everything from training her muscles to hold a pencil, to taking the extra time she needs to go through lesson plans.

"She's a person who needs support all the time," Melenie said.

Sophia needs in-person support not only to guide her through school, but to make sure she can stay safe at school during a pandemic.

Children with disabilities are more vulnerable to contracting the virus, as they may not understand why physical distancing and sanitizing measures are in place.

"A common cold puts my daughter in the PICU (pediatric intensive care unit)," she said.

In March, the government redirected $128 million from school funding to help with the province's response to COVID-19. Over 300 support staff at St. Albert schools were out of a job in April due to a $1.2-million cut to St. Albert Public school budgets.

These are educational assistants, library technicians, therapists and other specialists who worked with many teachers and coached individuals and small groups online, said superintendent Krimsen Sumners in a previous interview with the Gazette.

Ministry of Education press secretary Colin Aitchison said school boards should have received the reallocated money on July 1, along with some of the additional $120 million in operational funding given to school boards across the province.

The Alberta government said school authorities are expected to have in place supports and services for students with disabilities when returning to school, including mental health supports. They also have the "flexibility" to make decisions on staffing based on their needs.

"As with any other school year, local school authorities should be working with their parents to develop plans that work for their students," Aitchison wrote in an email to the Gazette.

"If a school authority is not rehiring the staff they chose to layoff, they are doing this despite having their full funding restored and despite receiving an increase in operational funding for the upcoming school year."

Families who decide to continue at-home learning instead will work with teachers and other staff to provide support and services to children and students, including those with disabilities, according to the province's school re-entry plan.

But resources for Sophia were strained even before the pandemic, Melenie said. Before, Sophia had to share one educational assistant with three other students. She had also lost her occupational therapist due to budget cuts, she said.

"Even without COVID, my daughter wouldn't be going back to school this fall," she said.

With school budgets feeling the pinch before the pandemic, Melenie said she worries how well her daughter would be supported when classes resume.

"That was the very first time I felt like my daughter did not matter in this government," she said. "As a person born and raised in Alberta, I had a very conservative mindset in some ways. And we're moving. It's that bad."

Shantel Sherwood is the spokesperson for Hold My Hand Alberta, a group of parents formed to protest changes to the education system. They organized a protest of about 100 people in mid-July outside the Alberta legislature.

Many of the parents she's spoken with have said they are planning to move to provinces like B.C., which she said have a plan to ensure children with disabilities are supported.

In B.C., students were set to go back in a phased-in approach, mostly two days a week for Kindergarten to Grade 5 and one day a week for Grades 6 to 12. Children of essential workers and those who needed special supports could attend classes full-time.

"They're going to get support. Everybody else will have to leave, but those kids will get to stay and get help," Sherwood said.

"So where's Alberta's plan? Whether it's from the board, whether it's from (Minister of Education Adriana LaGrange), somebody needs to say, 'Hey, we see these kids and we are setting aside time to make a plan for them.' Because no one feels safe."

St. Albert parent Robyn Lafleur told the Gazette last week she feels safe sending her kids back to class this fall. At-home learning was a difficult adjustment between her four kids, and she said she doesn't have any reservations about back-to-school amid the pandemic.

"We have immune systems for a reason, and (with statistics of COVID-19 cases in children), it's not really much to worry about. I'm not concerned at all," Lafleur said.

Another parent, Kayla Semmler said she felt "very relieved" when the province decided to reopen schools this fall. Her son really needs the structure of learning inside a classroom, she said, and it was overwhelming juggling a full-time job while trying to make sure he kept up with his Grade 5 schoolwork.

She does have a few remaining questions around how back-to-school will look, like how big class sizes will be, how recess will work, and if there will be enough teachers. But she's already started developing a routine with her son to make sure he's familiar with all the safety measures.

"We don't let him go into a store unless he's wearing a mask and then we sanitize our hands before and after to hopefully help him get into that routine when he does have to go back to school," she said.

"I do have a lot of faith in the teachers and confidence in them to be able to make it feel safe."

–with files from Kevin Ma