Some parents say they're excited, while others feel they have no other choice
Jan 13, 2021 5:40 PM By: Jessica Nelson 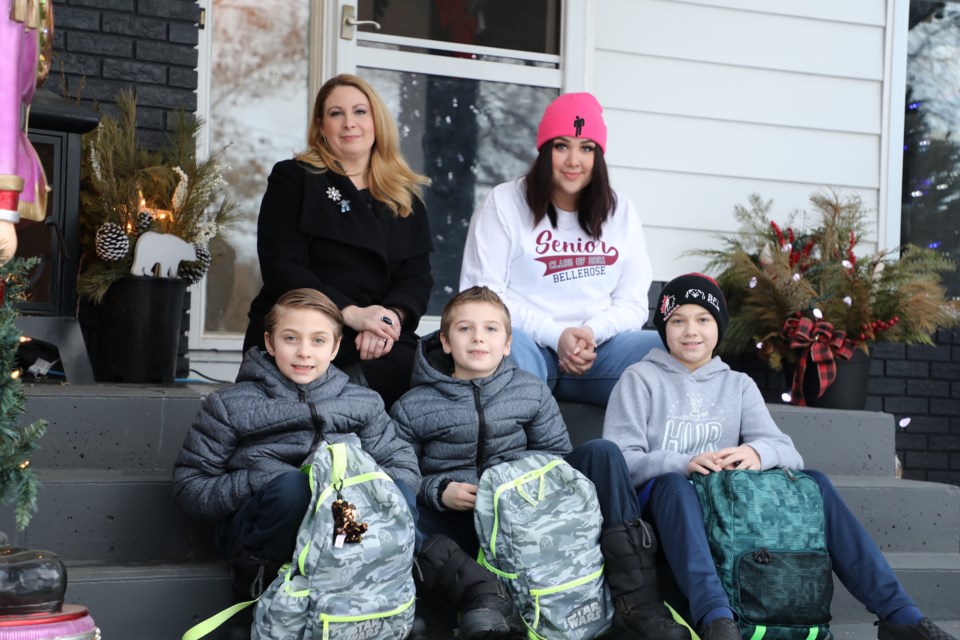 Shawna Smith is relieved Lily (17), Autumn (12), Tristan and River (8) are back in the classroom. JESSICA NELSON/St. Albert Gazette

St. Albert resident Shawna Smith said she felt “absolute relief” when the Alberta government announced all students would be going back to school this week.

On Jan. 7, Premier Jason Kenney announced students would be returning to in-person learning on Monday, while other health measures would remain in effect until Jan. 21.

The return to in-person learning was decided after "careful consideration of the importance of attending school in-person" as well as new evidence that showed "COVID-19 cases dropping in all school-age groups in December," wrote Minister of Education Adriana LaGrange in an open letter.

The announcement drew a mixed reaction from parents – some were relieved while others felt the return was too early.

“We've taken this seriously all along, we take all our precautions and all of the guidelines ... we just sort of feel life has to go on and we can't hide until this is over,” Smith said.

Online school has been tough on her children, Smith said. Her daughter is doing fine with online learning in high-school, but her elementary-aged kids are running into trouble.

It's been difficult for them to sit on the computer the entire day, and Smith said she believes it’s too much screen time for them. One of her children has special needs and requires more help to get through the day.

“I have to sit with him the entire time and help him go through everything and try and keep him from getting too frustrated,” she said. “Online school is very difficult, and you can take a little bit of that but, (doing it) day after day is very hard for children.”

Smith said she had no idea how working parents have been coping, not only with helping children with their schooling, but also with the extra cleaning.

“I'm very fortunate though because I am here for them. I have no idea how working parents do this. It blows my mind, and my heart goes out to them because this is a full-time job for me,” she said.

Smith said she had a refresher talk with her children about the importance of washing hands and social distancing. She understands people who are afraid to send their kids back and she also understands why teachers might be worried.

“(It’s) a very scary thing because no one knows how their body will tolerate it, but I do feel for the teachers that are scared … and they still have a ton of extra work on their plate to make their classrooms safe,” she said. "These teachers are just saints in my opinion."

Chantal Dussault is a single mom with a daughter in Grade 3. She said she is nervous about the return to in-person learning, but feels like she has no choice but to send her daughter back to school. As a single parent, she has to work.

“I don't know, I almost feel like I have to so that I can go back to work,” said Dussault.

In October, both Dussault and her daughter tested positive for COVID-19. Her daughter did not experience any symptoms, however, the virus made Dussault very ill.

Dussault had pneumonia in both of her lungs and was hospitalized three times as a result of COVID-19. Now, she uses four different types of inhalers to manage her uncontrolled asthma.

Dussault said her daughter didn’t want to go back to school on Monday and refused to get out of the car when she dropped her off.

“She's nervous about me getting sick again. She's nervous that there’s too many changes happening at the school because they were off, and then had one week of virtual. And then now again, another change. For her, she's finding all these changes too much,” said Dussault.

In an ideal situation, she said she would stay home with her daughter. But that’s just not possible.

“It's like a Catch-22 in my situation. I’m happy that she’s back at school so she can get some stability, but at the same time, I'm scared because we had it and I got really sick. I'm still having after-effects.”