“We've already seen a ray of light as prices have rebounded to levels not seen in several years," Nally said when talking about energy sectors.
Feb 25, 2021 2:00 PM By: Jessica Nelson 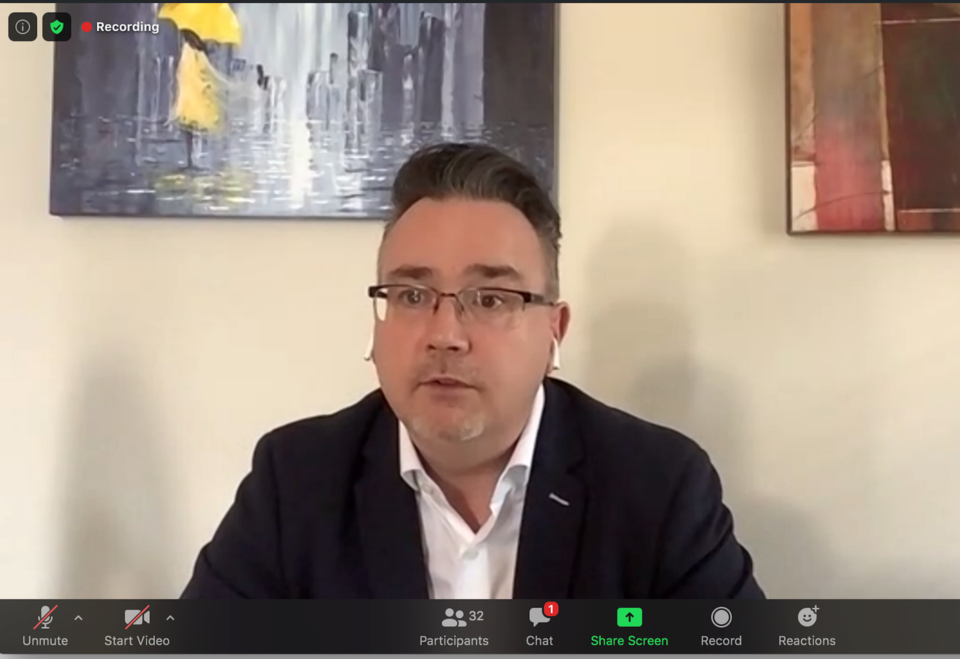 Associate Minister of Natural Gas and Electricity Dale Nally spoke at the Morinville and District Chamber of Commerce Virtual Luncheon on Feb. 17.SCREENSHOT

The Morinville and District Chamber of Commerce held a virtual luncheon last Wednesday to bring businesses and municipalities up to date on what's happening in the province.

Roberta Pawluck, manager for the Chamber, said the purpose was to give the public information on two sectors relevant to the area.

The luncheon featured Associate Minister of Natural Gas and Electricity Dale Nally and Minister of Agriculture and Forestry Devin Dreeshen. The ministers spoke about the parts their respective ministries are playing in Alberta’s Recovery Plan.

It was the first meeting of the year for the Morinville and District Chamber of Commerce. There were a total of 38 people in attendance. Pawluk said she targeted ministers she thought would draw people.

“It was our best-attended virtual (meeting),” she said.

Nally spoke about the energy industry and the Natural Gas Strategy and Vision Plan and ways the government is trying to diversify the economy.

“As we head into 2021, we are focused on implementing our plan to rebuild and diversify our economy and get Albertans back to work,” said Nally.

Oil and gas will continue to be dominant, he said. But the government is also looking into new areas of growth like the emerging opportunities in geothermal power and the mineral sector. Canada is now among the top natural gas producers in the world, with Alberta accounting for two-thirds of production, Nally said.

Natural gas offers opportunities in petrochemicals, and the Petrochemical Incentive Program that was launched last year has been seeing positive results, said Nally. That program provides grants to companies to attract investment in new or expanded market-driven petrochemical facilities.

“We look forward to some further announcements on this program as the year progresses,” he said.

Nally said he plans on releasing a strategy for hydrogen this spring. Liquid natural gas (LNG) also has the potential to be a big industry in the province, he said.

“(LNG) is going to be driven by Asia, and there is a small window for us to take advantage of that."

The province also has plans to advance plastics recycling technology. The COVID-19 pandemic has highlighted the role plastics play in producing personal protective equipment, like N95 masks and gloves.

“As government, we need to get out of the way of industry and let industry do what they do best, and that is to deploy this technology so we can recycle this plastic,” he said.

The energy sector has faced many difficulties over the last few years, but last year was unprecedented with the pandemic and resulting economic fallout and commodity crash. The natural gas sector specifically has been struggling for years, Nally said, but he believes these are trials the sector can overcome.

“We've already seen a ray of light as prices have rebounded to levels not seen in several years."

Last year was a strong year for agriculture in the province overall. Near-record amounts of crops were exported all over the world.

“We had the third-largest crop yield in the history of the province,” said Dreeshen.

Dreeshen also spoke about the recent announcement to drop crop insurance premiums by 20 per cent, which is expected to save farmers more than $55 million this year. He said the agriculture industry looks very strong on both the livestock side and the crop side.

“Now if anybody has canola sitting in their bins, it's worth the price of gold,” he said.

There were issues with the industry when two large meatpacking plants shut down last year, but a $42-million program cost-shared with the federal government “helped process about 500,000 head of cattle that were backlogged into the system.”

Dreeshen said there are plans underway to help the forestry sector become more competitive and attract investment into the province.

“You don't have to look very far to the west, to British Columbia, to see what happens when you have a government that over regulates and overtaxes certain industries – how it just drives out investment and jobs," he said.

Sturgeon County Mayor Alanna Hnatiw commented on the effects Bill 6 had on farmers in trying to create a safe work environment that was still profitable. The enhanced farm safety bill which passed in 2015 brought family farms under labour law rules.

In response, Dreeshen spoke about the difficulties Bill 6 created in the industry and how the government immediately consulted with the farming and ranching community after they formed government in 2019.

“I think we've found a really good sweet spot in making sure there's options in the type of coverage that agricultural producers have, whether it's WCB (Workers Compensation Benefit) or a private insurer,” he said.

Hnatiw also asked Dreeshen about rural broadband issues and wondered if it was an issue he was hearing about across Alberta.

Dreeshen said he is working with Minister of Service Nate Glubish, who went through his own consultations with rural communities. The federal government recently announced an additional $750 million to the Universal Broadband Fund – a $1.75-billion fund announced last November meant to improve rural Internet speeds.

Dreeshen said he is hopeful that Alberta will see a share of that. Right now, Sturgeon County is ineligible to receive any funds because of data inaccuracies, according to Hnatiw.

Dreeshen said Glubish is working on a “made in Alberta program” but money-wise, it is a tough year.