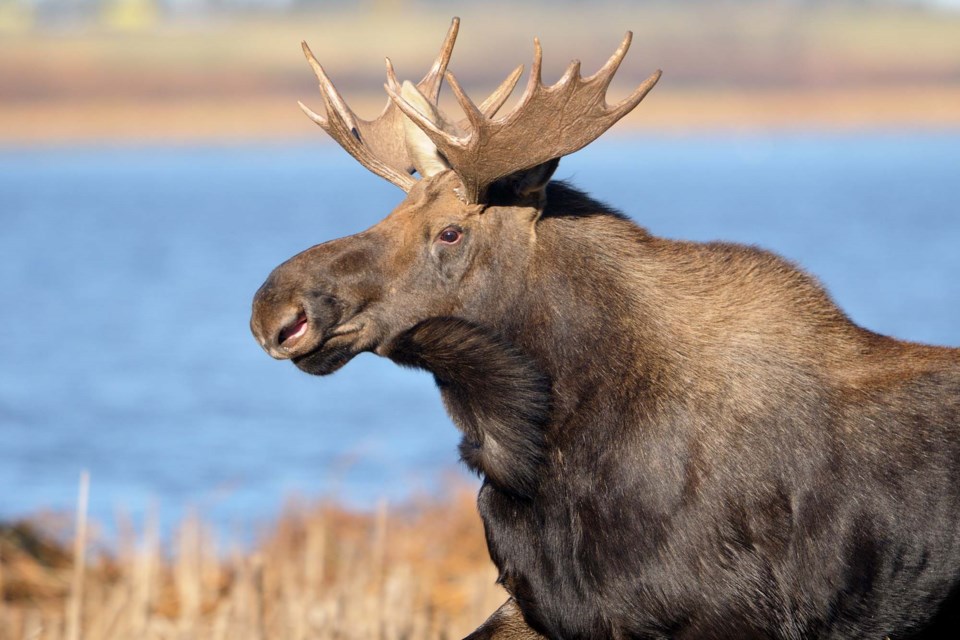 WATCH FOR MOOSE — Sturgeon County warned drivers Oct. 22, 2020, to watch out for moose after a spike in wildlife collisions that fall. Seven drivers had collided with moose since Sept. 4, resulting in many injuries and one fatality. DAVE CONLIN/Submitted photo

Moose-and-car collisions have more than tripled in Sturgeon County this fall, and that’s led the county’s fire chief to call on drivers to slow down.

County officials posted a notice Oct. 22 that called on drivers to take more care on the roads due to a sudden spike in wildlife collisions.

County fire chief Pat Mahoney said that the county had logged seven moose/car collisions since Sept. 4, up considerably from the two that happened during that time last year. Those collisions had resulted in serious injuries and one fatality.

“Our numbers this year are up quite drastically and the accidents are more serious,” he said.

Mahoney said the fall and early winter arerutting season for moose and deer, with moose active from September to late October and deer active well into December.

The urge to rut means moose will be particularly aggressive and careless at this time of year, and won’t watch for cars before they charge across a street in pursuit of a mate, said Hugh Wollis, a retired Alberta Fish and Wildlife biologist in St. Albert.

“They have no predators (here) except the car,” said Wollis, adding he nearly hit a moose himself recently on Yellowhead Trail.

The great size and mass of moose – they’re often two metres tall and 400 kilograms – means that they can cause tremendous damage when they meet a fast-moving car, Mahoney said. Their great height also makes their eyes too tall to be illuminated by headlights (unlike deer) and their bodies more likely to roll up and over a car’s windshield instead of bouncing off the bumper.

The best way to avoid a moose collision at this time of year is to be extra vigilant, Wollis said. Some rural drivers will aim lights at ditches just to spot moose.

Mahoney asked drivers to use caution and their high-beams on county roads in the weeks ahead, particularly at dawn or dusk and near water, trees, curves or hills.

“Take your time, slow down and be cautious.”