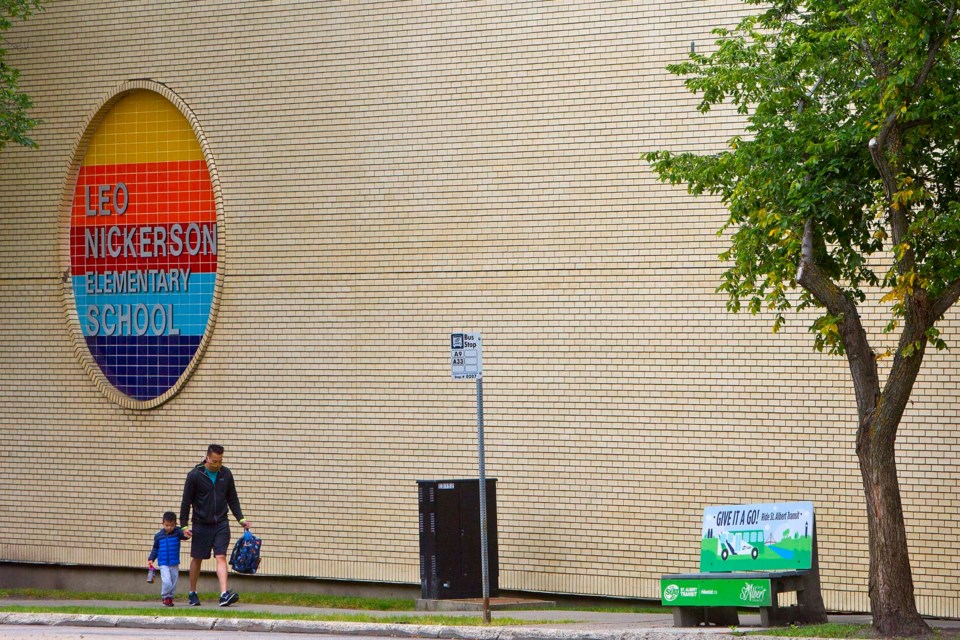 SIGIS OUTBREAK – About 17 people are in isolation this week due to a COVID-19 outbreak at the SIGIS out-of-school care centre at Leo Nickerson Elementary. The outbreak, which consists of two cases, is limited to a classroom used by the SIGIS program. CHRIS COLBOURNE/St. Albert Gazette

About 43 students at the Morinville Colony are learning from home this week after a case of COVID-19 caused health authorities to temporarily close their local school.

The Gazette received a tip Monday, Sept. 14, that the Morinville Colony School south of Alcomdale had been closed due to a reported case of COVID-19.

The two-room K-9 school is run at the Morinville Hutterite Colony by Sturgeon Public Schools. The school board had yet to post notice of the closure on its website or social media accounts as of 11:50 a.m. Sept. 15.

Board superintendent Mary Lynne Campbell said Monday that there has been one confirmed case of COVID-19 at the school, which has about 43 students.

“We are working closely with Alberta Health Services and AHS has directed that the school be closed for a two-week period.”

Campbell said the school closed Sept. 10 and is to reopen Sept. 25. She declined to release any further information on the situation at the school, directing questions to Alberta Health Services. She said Sturgeon Public is “continuing to support the children and families at the colony,” but would not say how.

Alberta Health Services was not able to provide information on the situation at the colony school by press deadline.

The case at the colony was the fourth identified at a St. Albert or Sturgeon County school since the start of the school year.

Two people have been diagnosed with COVID-19 at the SIGIS Child Care Society's out-of-school care centre at Leo Nickerson. The centre operates out of a classroom and an unattached portable at the school and cares for Leo Nickerson students in grades K to 6.

The first case was announced by Alberta Health Services Sept. 6. School principal Helen Nowell advised parents about the second on Sept. 11 in a letter.

“We have been notified by Alberta Health Services (AHS), Centre for Disease Control (CDC) that an outbreak, 2 confirmed cases, has been declared at the SIGIS Out of School Care classroom attached to Leo Nickerson School,” she wrote.

Nowell wrote that the outbreak affected the classroom half of the care centre and did not affect the portable or the school itself. There had been no exposure to students at the school and “the students from the out of school care classroom were not at school while in the communicable stage.”

SIGIS executive director Tricia Cunningham said there would have been about four adults and 13 students in the affected classroom. While AHS has not said if the diagnosed person was an adult or youth, Cunningham said the person did not show visible symptoms while at the centre.

Everyone in the classroom has been isolating at home since AHS told families about the case on Sept. 6, Cunningham said. The second case was diagnosed amongst those in isolation on Sept. 11.

SIGIS staff closed the classroom on Sept. 8 and thoroughly disinfected it, Cunningham said. The classroom would reopen once the isolated adults and students returned to school on Sept. 21. The group in the portable was still running.

Nowell wrote that affected students had been directed to isolate for 14 days and get tested for COVID-19. Each was getting learning packs from their teachers so they wouldn’t miss school.

Cunningham said these were the first cases of COVID-19 at any of the group’s 20 locations since March. She said SIGIS staff rigorously followed AHS guidelines for child-care centres, which include temperature checks, masks and sanitization, and now plan to disinfect facilities with an electrostatic spray cleaner at least once a week.

“We want to ensure everyone we are taking this extremely seriously,” Cunningham said.

Nowell asked families to use the daily health-screening tool and keep their kids at home if they show any symptoms of COVID-19. Students should not return to school until they have tested negative for the disease and are symptom-free.

Morinville Community High principal Don Hinks told parents that a case of COVID-19 had been diagnosed in a student at his school on Sept. 11. It was the first reported case at a Greater St. Albert Catholic school since the pandemic began.

Hinks said the student in question went to school on Aug. 31 and elected to self-isolate starting that evening after they felt ill. The student got tested for COVID-19 on Sept. 1 and received a positive diagnosis on the night of Sept. 9. Hinks sent word to the school population the next day.

Hinks applauded the student’s actions, saying they did exactly what they were supposed to do in this situation.

Hinks said 18 students and three staff members went into isolation as a result of the diagnosis and could return to class Sept. 15 (two weeks after their last contact with the diagnosed student) if they show no symptoms and/or have not received a positive COVID-19 test result. The affected students learned from home, with most being taught remotely by one of the affected teachers.

Hinks said there was a lot of anxiety in the school after news of the case broke, but most students were still attending classes. Teachers fielded questions from students last Friday, emphasizing the importance of masks, physical distancing and avoiding large social gatherings.

“People don’t go out into the community hoping to get COVID,” Hinks said, and we need to support those who have to go into isolation because of it.

“This is not about finger-pointing ... this is about supporting our students, our staff and our families.”

As of Sept. 15, AHS reported 16 active COVID-19 cases in St. Albert, eight in Sturgeon County, and two in Morinville.