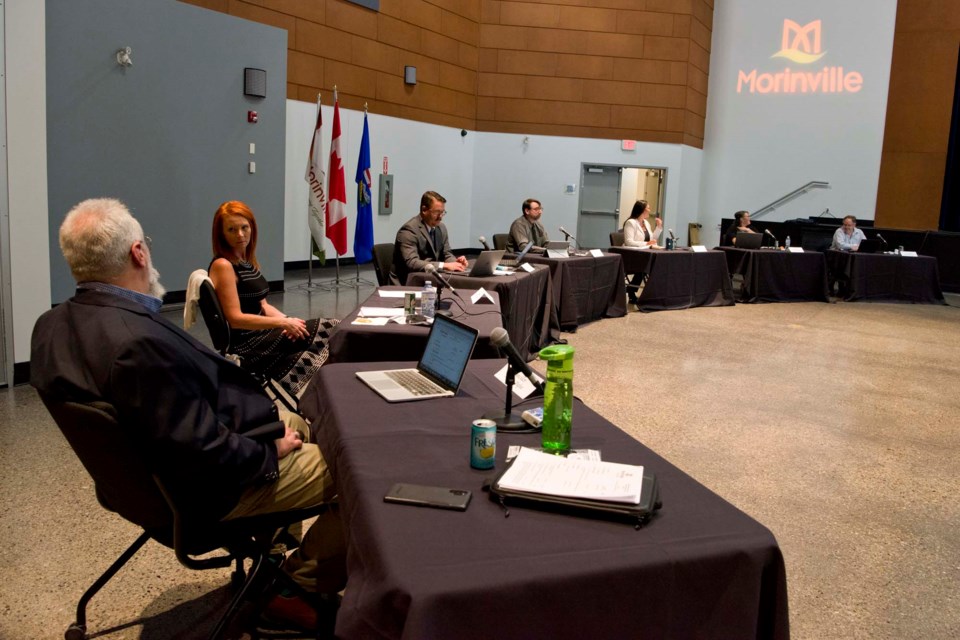 Morinville residents could theoretically be jailed for not wearing a mask under a proposed new mask bylaw – one several town councillors say is too harsh.

Morinville council considered the details of the proposed mandatory face covering bylaw on Sept. 15 during committee of the whole.

Council called for a mask bylaw Aug. 25 as a way to stop the spread of COVID-19. Sturgeon County had passed, and invoked, its own mandatory mask bylaw a few days before.

Iain Bushell, the town’s general manager of community and infrastructure services, said he cobbled together a draft bylaw based on the best examples he could find in Alberta.

Like the one passed by Sturgeon County, Morinville’s draft mask law required people to wear masks at all times while in an indoor, enclosed, or mostly enclosed public place or public vehicle.

It also included the same exemptions.

Anyone who was under the age of 10 or unable to wear a mask without help or for mental/physical/human rights reasons was exempt, as were people caring for disabled persons if a mask would interfere with that care.

Masks were not required while eating or drinking in a designated spot or religious ceremony, doing something that required being unmasked, while separated by physical barriers, or while exercising. People could also go mask-free while doing theatre or a personal consultation provided they stayed two meters apart.

The draft law did not apply to schools, hospitals, child care facilities, and any employee-only areas or stage areas in religious ceremonies provided physical barriers or two metres of separation were present.

Like Sturgeon’s, Morinville’s mask requirement would not activate until Alberta Health Services placed the town on its COVID-19 watch list, which happens when there are 10 active cases and 50 per 100,000 people. Unlike the Sturgeon law, which lapses once the county spends 14 consecutive days not on the watch list, Morinville’s mask requirement would stay in force until council explicitly repealed it or the law expired on Dec. 31, 2020.

When asked why the draft did not include an automatic “off” switch, Bushell said it would be simpler to have a mask law that stayed in place until council explicitly said otherwise, adding that about half of this region’s mask laws did not have auto-off switches.

Many councillors said they wanted to see an “off” switch in the law, but differed on its details. Coun. Scott Richardson favoured a 14-day threshold to be consistent with Sturgeon County, while Mayor Barry Turner and councillors Stephen Dafoe, and Lawrence Giffin leaned toward 28 days, as that is the timeframe the province uses to determine if an outbreak at a school is over.

“This would be so much easier if the province had mandated this kind of stuff,” Dafoe said.

The draft law said that anyone who violated its provisions could be fined at least $100 and, upon summary conviction in court, be fined up to $10,000 and/or jailed for a year. St. Albert’s mask law included similar penalties, while Sturgeon’s had a flat $100 fine.

“Ten thousand dollars or a year in jail for not wearing a mask at the discretion of the officer, I have a hard time with that.”

Town chief administrative officer Stephane Labonne said the draft was meant to provide a range of penalties. A $100 fine would be appropriate for one offender at a store, but you would want a bigger penalty for someone hosting a huge mask-free house party. A $10,000 fine would require a particularly extreme offence.

While several councillors opposed the $10,000 fine, Giffin said the law should include steeper fines for flagrant offences.

The draft bylaw did not include a ban on harassing people for not wearing a mask if they were exempt from doing so – a ban present in both the Sturgeon County and St. Albert mask laws.