James Dufour is remarkably clean-shaven for a man who named his business after a hairy-faced animal.
Jan 3, 2017 11:00 PM By: St. Albert Gazette 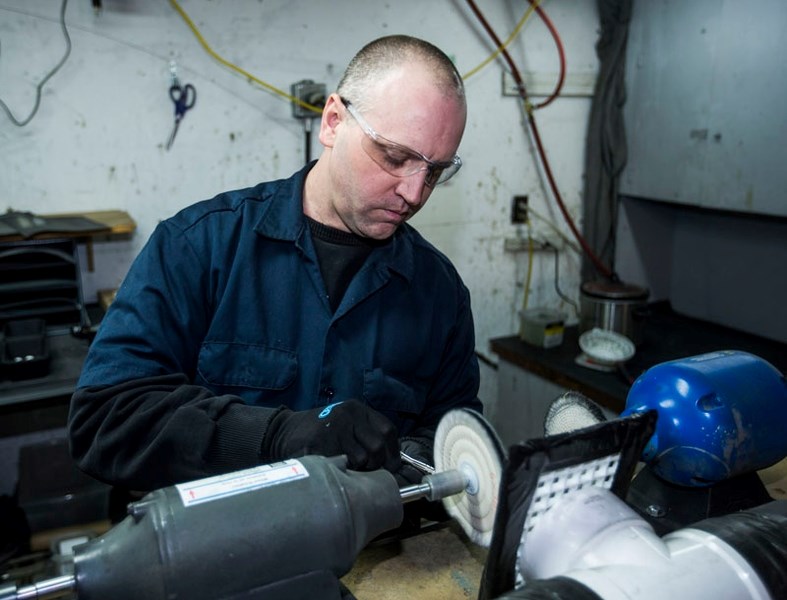 James Dufour is remarkably clean-shaven for a man who named his business after a hairy-faced animal.

But for the same reason one can be skeptical of a skinny chef’s cooking abilities, the owner of Wolfman Razors in Morinville says he now likes to keep a clean shave. Dufour caters to shaving hobbyists who want old-school safety razors.

“My hobby was not shaving,” he said with a laugh. “I work in a machine shop, where I don’t have to be shaved for anything.”

With a lathe and two mills in his small bay in Morinville’s industrial park, Dufour machines safety razors of his own design, from raw materials to finished product, full-time and as a one-man operation. Customers might be a little put off if he showed up with a beard.

A safety razor is different than the typical disposable razor in that the only part you need to replace is the blade itself, which installs into a metal head that screws onto a handle. The handle and head can last forever if they’re taken care of.

But it wasn’t a love of antique razors or shaving that got him into this specific line of work.

When Dufour began his career apprenticing as a machinist in the aerospace business in Ontario two decades ago, he was machining airplane components with the kind of precision and attention to detail one would expect in that line of work.

He moved to Alberta to work in the oilfield, doing machining work that wasn’t exactly as challenging as the aerospace work, but which paid the bills well. A few years ago he got small space with the intention of opening up his own machine shop, expecting to do whatever kind of machining work came his way on a part-time basis.

“I was just starting off with a lathe and that mill I put together myself,” he said. “I wanted to get a shop going but I didn’t have a lot of work at my shop.”

Business was slow at first, and he posted on the social media site Reddit asking other small-business owners about ways to drum up business. A Los-Angeles-based businessman who sold shaving supplies asked, “Can you make one of these?” and sent a photo of a safety razor, then put in an order for a few.

“I thought I’d make him four then I’d never hear from him again,” he said.

When that client sold them in one day and asked for 10 more, which also sold in a day, he realized he might be on to something. He designed a razor to sell under his own brand, and demand was higher than he expected.

“I was never expecting this,” he said. “I thought I’d have one at home, and one in my toolbox to show people at the shop.”

Safety razors have fallen out of fashion in much of the Western world as disposable razors and, more recently, the multi-blade razors with disposable heads have become the mainstay for clean-faced men. There is, however, a strong global demand for his product.

“In a lot of places in Asia, this is the way they shave. It’s way more cost-effective to use something like this,” Dufour said. “There’s a few different brands available, even though they became obsolete to most people in North America several years ago.”

But with a niche popularity online, people began to collect old antique safety razors and several companies started to mass-produce new models. And those razors are catching on with a growing group of wet-shaving enthusiasts, who mostly connect with each other online.

The demand is so great, in fact, that it’s not likely you’re going to be able to pick one of these razors up for your shave tomorrow morning. Or next week. Or even next month. Availability is limited.

Dufour said he likes being able to machine each piece himself, and give each peace the kind of highly polished finish that makes it such a unique razor to own. He said he has looked at the possibility of hiring some employees, but doesn’t like the idea of an employee having to stand and polish razors non-stop for a full-day shift – and besides, he likes to be able to put his precision-machining skills to good use.

The razors are available in just one design at the moment, but he said he hopes to expand that offering soon. Clients can choose from a variety of metal types and colours, and he also offers custom engraving on the pieces. The prices go as high as several hundred dollars.

He just wants prospective customers to know that if they’re interested, they’re going to have to be patient due to high demand.

For more information about his company, visit www.wolfmanrazors.com.