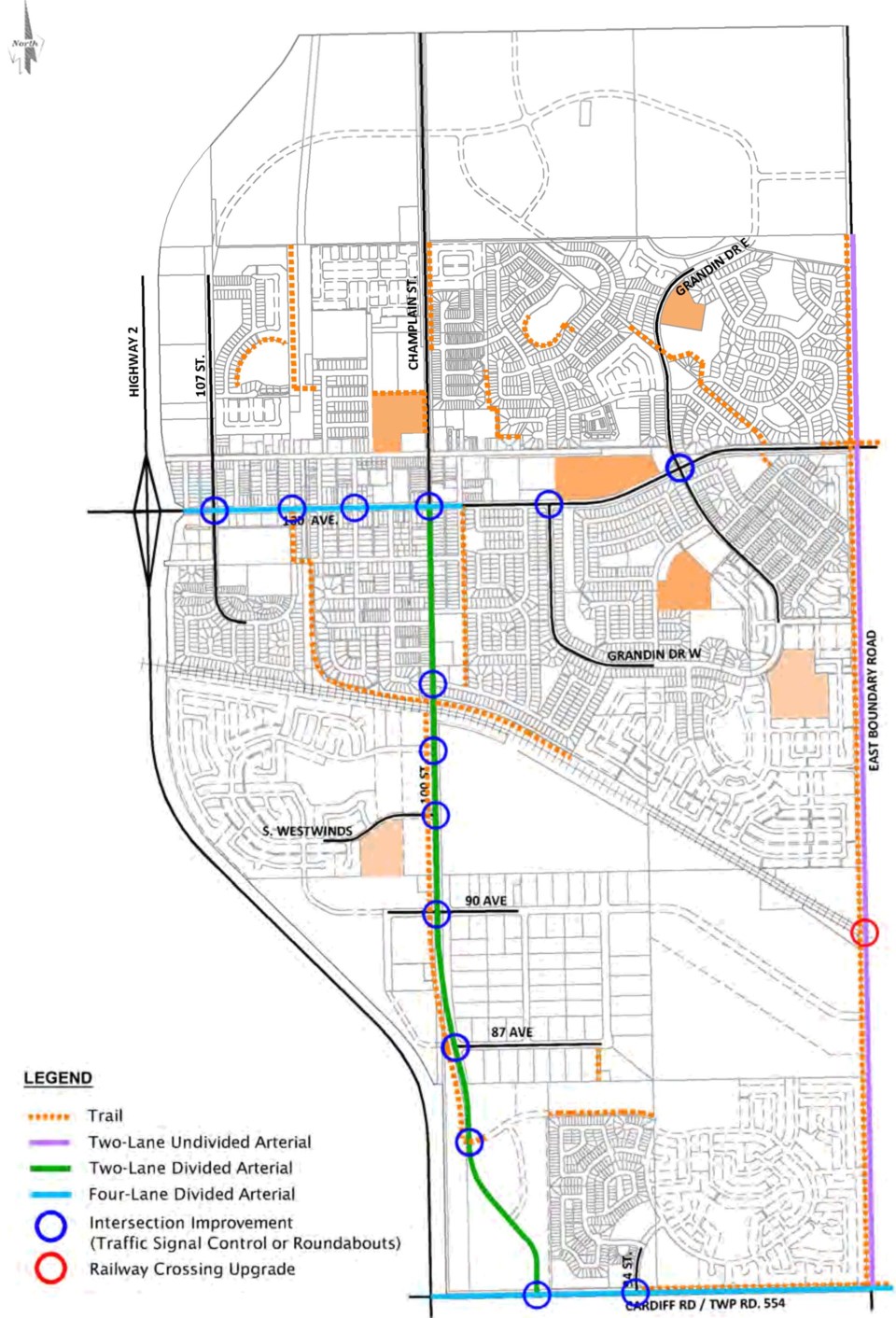 ROADS IN 2045 — This map depicts upgrades to Morinville's roads and trails that the recently approved transportation master plan says should be built by 2045. Of note are numerous traffic signals or roundabouts (shown as blue circles) and a fully paved East Boundary Road (shown in purple). TOWN OF MORINVILLE/Photo

Traffic on Morinville’s east boundary road is set to rise tenfold in 15 years, suggests a new report, and it’ll need a $7-million upgrade to handle the load.

Last updated in 2004, the $180,000 transportation master plan sets out how roads, trails, and transit services should be upgraded in the next 25 years based on traffic projections.

East Boundary Road would see one of the biggest traffic hikes, with traffic rising almost tenfold within 15 years to some 2,050 cars per day.

That road is already seeing a spike in traffic as people use it to get to the Morinville Leisure Centre, and is supposed to act as an alternate north-south truck route in days ahead, Mayor Barry Turner said. It’s also often impassable due to flooding – the town closed it to all but local traffic earlier this month after heavy rains turned it into mud.

“It’s in pretty rough shape, there’s no other way to put it,” Turner said.

“We’re at the point where we do need to make a massive investment in East Boundary Road to bring it up to an urban standard.”

The plan is to upgrade East Boundary to a two-lane paved road for about $7 million within five years, Turner said. The town has a design in place and is now waiting on cash from either Sturgeon County or the province to build it.

The master plan proposes Hwy. 642 become a divided highway within 15 years with key intersections either signalized or replaced with roundabouts. Turner said the next council would have to make a decision on which way to go; he initially favoured signals, but noted roundabouts would make it easier for drivers to cross a divided highway without making detours through residential areas.

The plan proposes most of 100 St. south of Hwy. 642 become a divided road with left-turn lanes within 15 years, with Cardiff Road west of 94 St. becoming a four-lane (two in each direction) divided road by that time as well. It also proposes Morinville plan to build two new east-west roads north and south of the railway tracks sometime in the future.

The plan states future roads and sidewalks should be planned with accessibility in mind as well as a “complete street” mindset – one that accommodates pedestrians and bikes as well as cars. This is meant to encourage more active transportation and drive down greenhouse gas emissions. The plan also sets out an expanded trail network, with ones along East Boundary Road and along 100 St. to be built within five years.

The plan says town council should perform a Safe Journeys to School study, install temporary curb extensions along Hwy. 642 west of 99 St., and put a traffic signal at the Cardiff Rd./100 St. intersection within a year.

Turner noted this is a very high-level plan, the elements of which would not be implemented unless funded at budget time.

The transportation master plan can be found in the agenda package for the July 14 meeting.