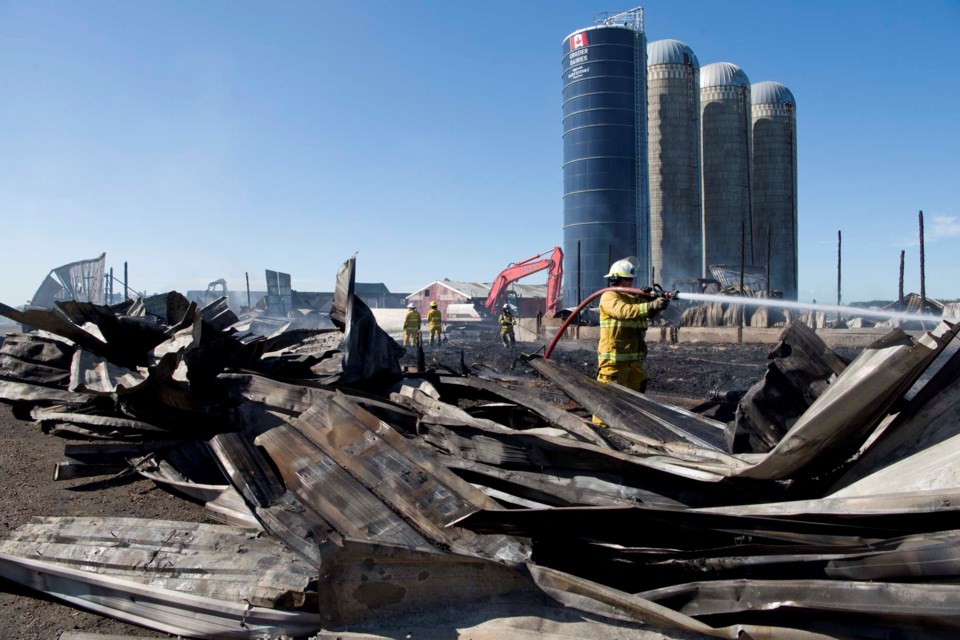 WRECKAGE – Sturgeon County fire crews douse hot spots with a hose and a backhoe at the Crozier Dairy farm Aug. 4. A large fire the previous day destroyed the 400' x 100' barn that once stood on this site. KEVIN MA/St. Albert Gazette

A Sturgeon County dairy family is still in shock after a fire Monday evening torched a large barn on their property.

About 33 Sturgeon County firefighters rushed to the Crozier Dairies farm near Hwy. 28 and Twp. Rd. 544 just west of the Edmonton Garrison on Aug. 3 at about 5:09 p.m. after an old metal barn caught fire, sending a thick plume of smoke high into the sky.

The roughly 400-foot by 100-foot one-storey barn was owned by the Crozier family, which has raised and milked dairy cows in Sturgeon since roughly 1896.

Speaking as he surveyed the wreckage, farm co-owner Les Crozier said his brother, Lee, spotted the fire at around 5 p.m.

“I’m still amazed how quickly it went,” Les said, adding the barn was fully engulfed in about 15 minutes.

Crozier said the barn was actually two connected barns built in the 1960s and 1990s and was once used as a dairy – it became a grain/equipment storage site in around 2014. While the barn did not contain any animals at the time of the fire, it did contain a semi-truck and many large pieces of farm equipment, all of which were destroyed.

Crozier praised the efforts of the Bon Accord, Calahoo, Morinville, Namao and Edmonton Garrison firefighters for keeping the fire from spreading to nearby homes and buildings.

“If those trees would have caught fire, we would have lost our homes,” Crozier said, indicating a tall stand of spruce across the lane from the barn.

Crews had the fire out by about 7:30 p.m. but were still on scene the following morning digging through the twisted wreckage with a backhoe to douse hot-spots.

County fire chief Pat Mahoney said the fire caused about $900,000 in damages and no injuries. On Tuesday, he had yet to determine the cause of the fire, but noted there was a thunderstorm in the area at the time and that the inside of the barn was quite dry.

Mahoney said this was the biggest structure fire in the county so far this year, with some 13 fire trucks responding to it.

Crozier said the last time anything like this had happened on his farm was when they lost two barns to the 1987 Edmonton tornado. While he has insurance to cover the barn and the equipment in it, Crozier said the loss of the barn means that he now has to replace the 100,000 bushels-worth of grain storage it provided.

“We’re still kind of in shock here,” he said.

“It’s kind of hard to see your whole family’s effort go up in a day.”

Anyone who spots a fire in Sturgeon County should call 911, Mahoney said.