A University of Alberta student has made a free app he hopes will help St. Albert drivers slow down to dodge photo radar tickets. U of A computer science student and Edmontonian Benjamin Lavin published his free Photo Radar App earlier this fall.
Nov 10, 2017 11:02 PM By: Kevin Ma 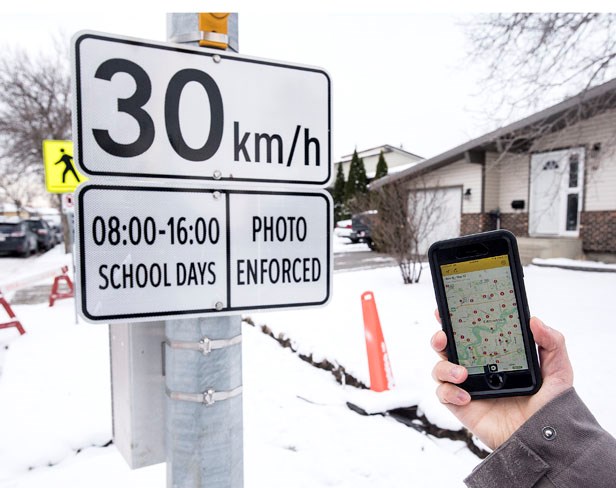 A new app developed by a UofA student, Benjamin Lavin, called Photo Radar App is catching on in St. Albert as a way to help people slow down and avoid tickets. Here the app is seen near a speed sign on Akins Dr. in St. Albert November 9, 2017.

A University of Alberta student has made a free app he hopes will help St. Albert drivers slow down to dodge photo radar tickets. U of A computer science student and Edmontonian Benjamin Lavin published his free Photo Radar App earlier this fall. Lavin said he knocked out the first version of the app in a weekend last August after he heard that the City of Edmonton had started publishing the location of its photo enforcement sites online. “I just set out a challenge for myself to see if I could take that and put it into an actual useable format.” The app proved to be a smash hit when it launched in mid-September and had some 20,000 active users as of November. Lavin got a flood of requests to have the app cover other cities, and has expanded it to cover St. Albert and 10 other Alberta communities. The app automatically grabs publicly-posted information on where fixed and roving photo enforcement cameras are in operation on any given day and plots them on a map, Lavin said. When you get within a few hundred meters of such a site, if the app detects you speeding, it makes a radar-like sound to remind you to slow down. “If you’re not hearing anything, you’ve got nothing to worry about.” Lavin said he hoped the app would encourage drivers to slow down to avoid speeding tickets. “It’s not like the app is a tool to kind of pull one over on the city,” he said, as all the info it uses is publicly available. St. Albert RCMP Cpl. Tim Gaultois was familiar with the app and said it could improve public safety if used as intended. “Knowing that (photo radar) is there is going to have people slow down,” he said, so this app could be a useful tool in that respect. Still, the app could also give drivers a false sense of security, he said. While the app tracks fixed cameras and the “site of the day” locations published by the City of St. Albert, operators can legally show up at any of the city’s hundred-odd authorized photo radar sites on any given day, and the app doesn’t track those other sites. It also doesn’t account for RCMP check-stops or roving patrols. Some drivers will still speed even if they know photo radar is in the area. “Distracted driving is almost as bad as the speeding itself,” Gaultois said, and the app could cause trouble if drivers fiddle with it behind the wheel. Lavin said he hopes to add more customization to the app and eventually take it nationwide, and planned to develop apps full-time once he graduates. He’s kept the app free, but has put in a link in it if people want to send him donations. The app is available at https://photoradarapp.com.