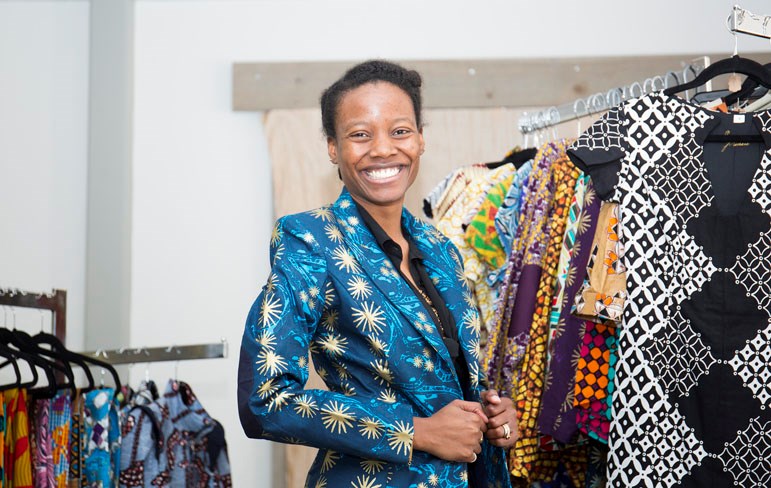 Lorna Mutegyeki stands in a bright blue blazer that’s part of her Msichana Inc. clothing line. All the clothes are made in Uganda by women. She is selling her clothing from The Collective in downtown St. Albert.

This is how she aims to make other women feel through her new clothing line, Msichana Inc., which uses traditional African patterned wax print textiles woven into western-style clothing. Each piece is patterned with bright colours and vivid shapes.

“In African fabrics, we’re bold,” she said. “I feel like when I wear this I’m connecting with my roots, but I’m also expressing myself," she said.


Mutegyeki is one of three tenants that have recently moved into The Collective space on St. Thomas Street.

The Collective is a city-run initiative that launched in May 2016. For rental fees of $50 a month, young entrepreneurs gain business mentorship and a taste of what it feels like to operate in downtown St. Albert. The program provides one-on-one meetings with advisers from Northern Alberta Business Incubator (NABI) to talk marketing and make tweaks to their business model.

Chelsey Tattrie, spokesperson for NABI, said the program is aimed to give young entrepreneurs the tools they need to eventually open a storefront in St. Albert.

"Hopefully they grow enough that they move out of that space," she said.

Tattrie said she was excited to have Mutegyeki move into The Collective.

“The first thing you’ll notice about Lorna is her passion, it is so contagious. She’s a great entrepreneur for The Collective because her company is focused on building community and is an innovative social enterprise. I can’t think of another business like Msichana," she said.

Msichana Inc. operates as a social enterprise. Every article of clothing is made by women in Uganda who come from less than ideal situations. Through the business, the women get a living wage as well as training on business and finance, so they can eventually leave the company and open their own stores.

“It’s like career guidance for them,” she said. “I want women to stand up and be leaders in the community.”

Mutegyeki said she wanted to use patterned fabrics from across Africa to show Canadians a side of her home country that’s usually not communicated in the media. The continent is usually portrayed as filled with poverty and crime, and although this does exist, there’s an aspect of Africa that she said seems to go overlooked.

“The culture is so rich and strong,” she said. “I want people to experience the Africa I know, there’s so much joy and talent. Our fabrics mean a lot to us and we are a bright and vibrant people.”

This strength was something Mutegyeki grew up experiencing. Her mother was a fashion designer who had learned the trade in London, England, and sold western-styled clothing from their home.

She said her father was a feminist, and provided her the same opportunities as male children had growing up.

“I grew up very aware that it was awesome being a woman, although that’s not usually the case,” she said. “Even sending me to school in Canada was something different, with my dad being willing to do that for his girl child.”

When Mutegyeki was 18 years old her family sent her to the University of Alberta where she got an undergraduate degree in molecular genetics. Afterwards she shifted her focus, obtaining a master in business administration.

Mutegyeki said she always knew she wanted to do something with fashion. When she was young she was surrounded by clothing and watched her mother set the stage for what a social enterprise could look like.

“My mom, growing up, would get ladies who didn’t have self-confidence, didn’t believe they could do anything, and she would train them up and show them.”

Mutegyeki decided to bring the concept to Canada, only instead of just giving women training on how to make clothing at a living wage, she would also bring in financial advisers to teach them the skills they need to start their own independent businesses.

Through local charitable organizations in Uganda, Mutegyeki was able to find women in the community who are at a social and economic disadvantage. Some may be without work because they’re full time mothers, while others sell their work on the street because they lack the knowledge on how to open their own businesses.

In order to help the women, hours are flexible. Mutegyeki’s mother and sister currently live in Uganda and do the training on building the clothes, while bringing in experts who can teach business and finance.

While the clothes are made in Uganda, the fabric used is from across the continent.

When the cloth, which is made from 100 per cent cotton, is purchased, it’s fashioned into western-style clothing. Instead of large traditional dresses, blazers, cigarette pants and jumpsuits hang from the racks at the retail store.

Mutegyeki said she wanted to create a clothing line where Canadian women could be comfortable wearing traditional African print in a way that’s relatable.

“I wanted people to here to experience Africa in their day-to-day, and I wanted them to connect with the people who made their clothing,” Mutegyeki said.

According to Vogue, African wax prints date back to 1863 when the textile first arrived in Ghana, Africa. The fabric originated in the Netherlands and was formerly known as Dutch wax prints.

The pattern on each wax print textile is different, depending on the place it comes from in Africa, but the process is virtually the same. Each vibrant design is meant to showcase the personality and emotion of the individual wearing it.

First, a design is decided on. A piece of virgin, beige cloth has parts covered in wax. The wax stops the selected sections of the textile from being coloured. Next, the piece is soaked in dye. A second layer of wax is put on the pattern in new places. The cloth is soaked in another colour before a third layer is placed onto the fabric.

The complexity and amount of colours determines how many times it’s soaked in dye.

Afterwards, the patterned cloth will be tailored into a clothing piece. The social enterprise is focused on a no-waste policy, so fabric left over will either go into another article of clothing, or be designed into an infinity scarf that can double as a breast-feeding cover.

The business mostly uses cloth from Uganda, Kenya, Tanzania and the Congo. Mutegyeki said she has plans to expand in the future to include more countries in Africa.

“I was looking for fabrics that would show the skill-set. I don’t have all of Africa yet, I wanted this first collection to try and give people the feel of Africa, the vibrance,” she said.

Mutegyeki said her favourite part so far is the reaction she gets from customers.

“A lot of my customers when they first come in, they say ‘I don’t think I can do that’. But I get them to wear it and then hang out, and I can see them change, they become more confident. I love what I do when I see that.”

She said even though monotone colours are more in fashion today, there’s something about the bold colours that instills confidence in the person wearing the outfit.

The business is located at #100, 43 St. Thomas Street, and is open from Tuesday to Saturday, noon until 4 p.m. For more information visit https://msichana.com/.