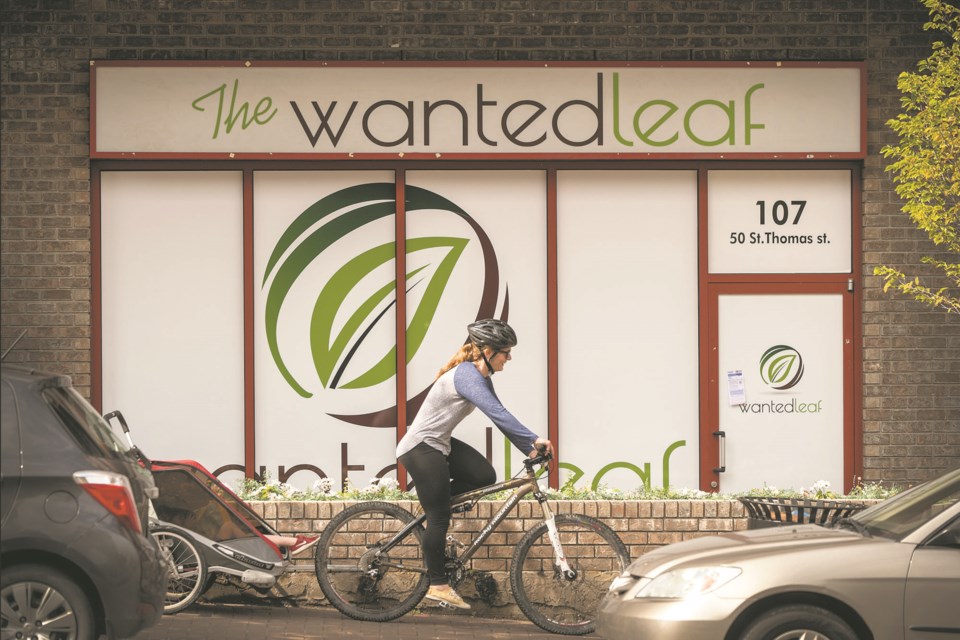 A cyclist rides past The Wanted Leaf on St. Thomas St. shortly before the legalization of cannabis in 2018.

Canada’s legal weed industry is budding, after the country's second wave of cannabis products was legalized last week, but St. Albertans will not see them on shelves until mid-December at the earliest.

Edibles, extracts and topicals became legal on Canada’s one-year anniversary of cannabis legalization Oct. 17, but there will be a 60-day delay before products can appear in stores, due to Health Canada regulations.

St. Albert Wanted Leaf owner Azam Ayoob said he has long been anticipating legalization of the new wave of products and it is “a good thing to see.”

“I’m pretty excited about the vapable devices,” he said. “The edibles, purely because it gives another option for people to consume the product. You don’t necessarily have to smoke it, so I think that opens it up too.”

He added the addition of new products on shelves will likely draw new customers into stores, but maybe not to the same extent as last October.

Alberta Gaming, Liquor and Cannabis Commission communications manager Health Holmen said it is far too early to tell whether growing pains the industry saw last fall will be repeated with edibles.

When the AGLC only received 20 per cent of the cannabis ordered from producers last fall, it placed a moratorium on issuing retail licences. In May, the moratorium was lifted and the AGLC began catching up on the licensing backlog.

“We don’t even know what the bigger picture of edible products (is) going to look like here,” Holmen said. “It also depends how many applications they’re able to clear through.”

Holmen added it is important to note there will be a limited number of products available initially, as licenced producers get a feel for the market demand.

A Health Canada spokesperson said in an email as of Oct. 17 they have received 50 applications from licenced producers to sell the new classes of cannabis products.

Spiritleaf owner Jayne Kent said she has observed high levels of interest in edibles, extracts and topicals, but it is hard to say what those products will look like.

“I think it’s something customers want; I think people are really looking forward to it and they’re really curious to see what that’s going to look like,” she said. “There’s a lot of anticipation around edibles coming out.”

Health Canada regulations make certain prohibitions around creating products that might appeal to children and requires plain packaging. Additionally, the amount of THC in a package of edibles is limited to 10 mg.

Cannabis extracts and topicals are limited to 1,000 mg per container.

Ayoob said he is glad to see strict regulations, especially around extracts for cannabis vaping.

“Now that Health Canada steps in and they can ensure the people when they buy it that they are buying a good product. So, it’s good for the people on the using end and it’s great for people who are now manufacturing because now they (have) certain guidelines and benchmarks they’ve got to stick to,” he said.

“Let’s keep it safe for everyone that wants use (it).”