The Ford F-150 has been the best selling vehicle in Canada for longer than I can remember. This truck is the benchmark for the half-ton class, the one in which the bar has risen substantially higher since the last redesign of the F-150 in 2009.
0
Jul 8, 2015 12:00 AM By: Garry Melnyk 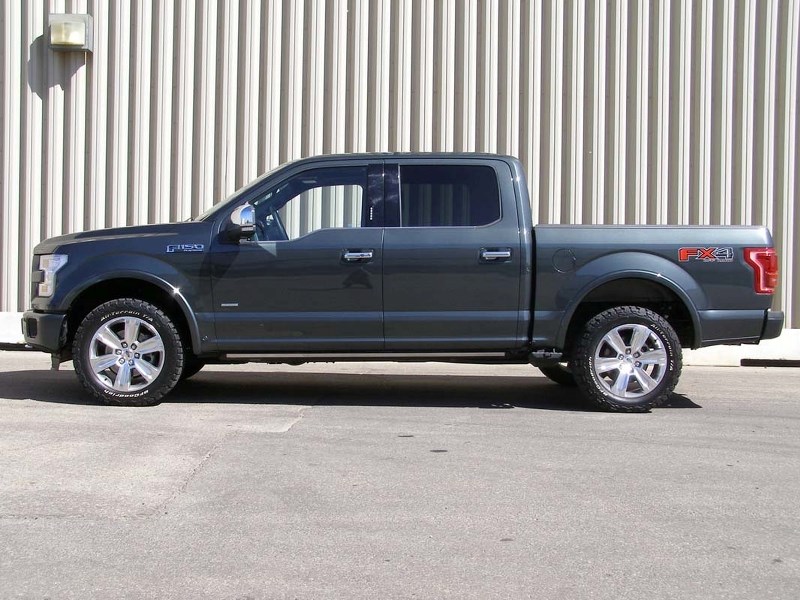 This truck is the benchmark for the half-ton class

The Ford F-150 has been the best selling vehicle in Canada for longer than I can remember.

This truck is the benchmark for the half-ton class, the one in which the bar has risen substantially higher since the last redesign of the F-150 in 2009. It is selling extremely well right now with both production plants running at full capacity.

Ford PR started talking about the new truck a year ago because it was going to be ground-breaking in its use of aluminum in the cab, box, fenders, hood and doors trimming more than 300 kilograms of unnecessary weight from its former self. The military-grade aluminum Ford says, will never rust (though it can corrode).

Ford loaned me an F-150 SuperCrew 4X4 Platinum Edition. Well optioned of course and capable for whatever terrain I wanted to drive it on – which in my week of driving was some gravel and lots of pavement. Certainly, using lightweight aluminum over steel in the F-150 can be felt immediately. The truck steers easier, dives less during braking and gets up to speed quicker. Ford says all models will see a 20 per cent fuel economy improvement simply from the weight loss. The truck remains quiet, tight and closing the door results in a sound which tells me everything is well screwed together. Engineers also worked to revamp the fully boxed ladder frame, which is now comprised of 78 per cent high-strength steel improving rigidity by about five to 10 per cent.

Aluminum body components aside, also worth mentioning is the new 2.7-litre twin-turbo V6. A really nice power plant, which feels very much like the 3.5-litre EcoBoost in terms of power. Extremely smooth, it’s designed specifically for a turbo application. The direct injection 2.7-litre gets a pair of BorgWarner turbos tied to a compacted graphite iron block. What that means is the engine is lighter and stronger. Fuel economy ranges from 12.2L/100 km around the city and 9.2L/100 km on the open road. Mated to a six-speed automatic transmission, the engine gives off a nice snarl under full throttle, and it has enough torque (375 lb-ft) to chirp the rear tires on takeoff. This would be an ideal engine for most people. Ford claims you can haul up to 8,500 lbs. and the truck’s payload capacity is now 2,250 lbs.

Inside, you get a little more interior space, larger windows, a more welcoming instrument panel and all kinds of technology to better enjoy the truck inside. As well as more hi-tech to help you drive safer; curve control (which automatically provides more aggressive four-wheel braking when the truck is going into a corner too fast), adaptive cruise control, lane-keeping assist, cross-traffic alert and blind spot monitoring. The 2015 F-150 has plenty more features, though some are only available on certain trim levels, which range from XL, XLT, Lariat, Platinum and King Ranch. Chrome packages are available on XL, XLT, Lariat and King Ranch. Monochromatic packages are available on the XL, XLT and Lariat. There are so many options and configurations I would advise a potential buyer to carefully research what you want in options and trim levels. Your basic F-150 starts at $21,399 and goes way, way up from there. My Platinum SuperCrew 4X4 tester started at $66,999. With $8,150 in options it topped out at $76,849 before GST.

After four-and-a-half years in development and some 10 million miles of testing, it should prove it is as strong and as tough and as capable as its engineers have said it would be.