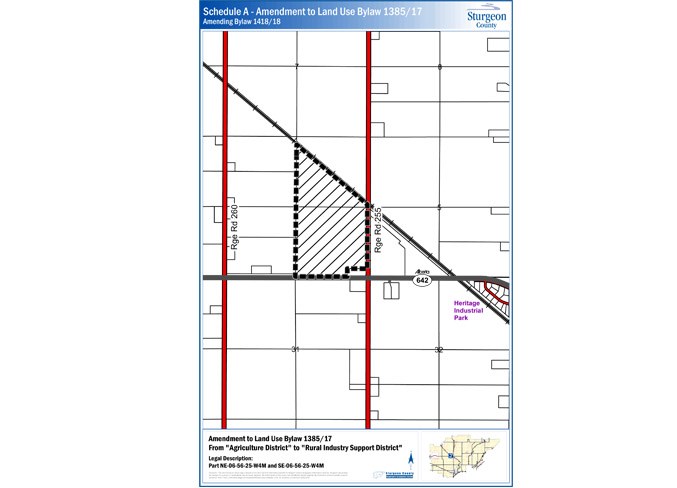 Sturgeon County may soon be host to a second grain terminal – the first new one to be built in decades.

The amendment, if approved, would rezone a chunk of land west of Range Road 255 and north of Hwy. 642 just west of Morinville from Agricultural to Rural Industry Support so that G3 Canada could apply for a development permit to build a grain elevator operation. The elevator, if built, would be next door to the Westmor Grain Terminal, which is currently the only grain terminal in the county.

The elevator would employ about 14 people and receive truckloads of grain from area farmers, county planning and development officer Aaron Hair told council. It would ship up to 400,000 tonnes of grain a year by rail to the West Coast, with about one 134-car train departing the elevator every two weeks.

G3 Canada is a relatively new grain handling company owned by the Saudi Agricultural and Livestock Investment Company, Bunge Canada, and the Farmers Equity Trust, said Brett Malkoske, the company’s vice-president of business development. It has about 20 facilities in Saskatchewan, Manitoba, Ontario and Quebec, and is this year expanding into Alberta.

“Canada is a very major global origin of some pretty important commodities, and we plan to be a big player in that industry,” Malkoske said.

G3 is looking to build up to six terminals (elevators) in Alberta in the next couple of years, Malkoske said. One of them was set to start construction this year in Wetaskiwin, and the company was also taking out land options to build in Morinville, Vermillion, Carmangay and two other locations. These multimillion-dollar terminals would cover about 200 acres and feature tall concrete silos and a large rail loop.

This site near Morinville is in the midst of a high-production agricultural region and near good roads and rail, Malkoske said. G3 would make a decision on whether to build here “in the next couple of months.”

County councillors said this was exciting news for the county.

Former county councillor Jerry Kaup, who will live next to the Westmor and G3 terminals if this proposal goes ahead, said this would likely be the first grain elevator built in Sturgeon since Westmor back in the 1990s. He had yet to decide his stance on the project.

“Competition is always good,” he said of it, and more options could help out area farmers. This terminal could also draw more business to Westmor, much like how Lowe's, Home Depot and Rona attract customers by clustering together in St. Albert. He was concerned about its potential impacts on road traffic, though, and wondered if an area structure plan might be needed for orderly growth in this region.

Hair said G3 would have to build a new rail spur for this development, but would otherwise use the same line as Westmor. He did not anticipate any train traffic problems as the terminal required just one train every two weeks. The county was reviewing the company’s traffic impact assessment, and expects that this region will need road and intersection upgrades if the elevator is built.

André Montpetit of Sturgeon Valley Fertilizer said this project is great news for farmers, as it would give them another place to sell and ship their grain besides the five or so terminals in the greater Edmonton region. Westmor might not like it, as this meant competition, and they had just recently spent millions upgrading their terminal.

The land-use amendment comes back for a public hearing later this year.