New help for those who survive suicide

DETAILS Screening criteria for Survivors of Attempted Suicide Group person must be between 18 and 45 live in St.
Apr 12, 2018 9:07 AM By: Scott Hayes 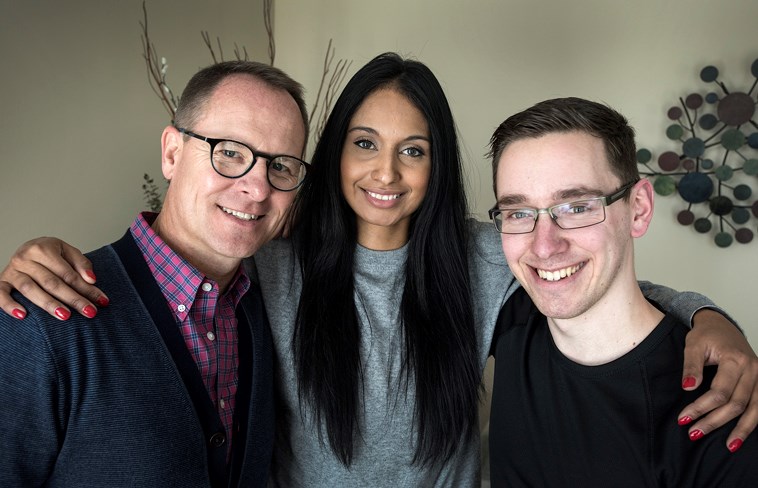 Grant Wardlow, left, and Petal Murti, both of Rivers Edge Counselling and Wesley Jones, right, together at the facility in St. Albert. Wesley Jones prompted Rivers Edge to start a suicide survivors support group, which they are starting in May with the collaboration of the city and the St. Albert Community Foundation.

Group meetings will take place every Thursday from May 10 to June 28 from 6:30 to 8 p.m. at Rivers Edge Counselling Centre, 14 Mission Ave. Attendance is free. Call 780-460-0022 or visit www.riversedgecounselling.com for more details or to apply.

If you see someone in distress, you can help before emergency services are needed by calling 211 and pressing 3.

It was only after his worst moment that Wesley Jones found something that he could work towards that would make life better for him and many others too.

It was nearly two years ago when the Morinville man wanted to die by suicide. Surviving suicide is just as traumatic as the circumstances that lead up to it too, though support mechanisms are not very well established.

He spent a few weeks receiving treatment at Alberta Hospital but when he was released, his next therapy appointment would be three months away.

“The biggest time for re-attempting is in the first three months after your attempt,” the 24-year-old said. “I didn’t want to wait that long,”

His enquiries to find any kind of post-attempt supports with the Edmonton Mental Health Association came up empty.

Starting next month, the Survivors of Attempted Suicide Group will have its first eight-week session. Led by therapists Petal Murti and Grand Wardlow at Rivers Edge Counselling Centre, the group will involve up to eight participants, leading them through discussions about the thought and behavioural patterns that led up to their attempts while offering healing mechanisms and coping strategies including access to other resources to help each participant to stay on a stable, healthy path. It is offered with the assistance of the city of St. Albert and the St. Albert Community Foundation.

The program is one of the first of its kind in Canada.

“In our initial research… I don’t think we found any groups like this in Canada. We had to look to the States for some examples,” said Nicole Imgrund, founding director of Rivers Edge as well as one of its counsellors.

“Wes came and talked to us about it and he was really very insistent. Actually, we had a meeting in town of all of the counselling mental health connections, everyone had talked to us because he did such a good job of connecting with the community and that made us do our research. We started thinking about what groups are available. Wes really had his finger on the pulse of just how important this need is.”

A group such as this, while noble in intent, must not be entered into lightly. Just as the factors that lead one to contemplate suicide are filled with diverse psychological problems including personal trauma, the treatments for a survivor must be sensitive, straightforward and grounded for long-term success. Getting several survivors together for group conversations means that guides Murti and Wardlow must be especially careful and well-prepared.

“It’s a pretty complicated high-risk group to offer in a really safe way, that it helps to lower and not escalate the risk that they’re in. Because there’s so many other factors than mental health issues that they could come in with, it took a long time to do the research and figure out if it’s working somewhere and what they’re doing that works,” Imgrund continued.

That’s also why any applicant who gets accepted into the group must pass the screening process.

What they do know is that this kind of support is long overdue.

“Speaking to my own client caseload and to maybe our colleagues’ [caseloads] as well, it’s a prominent issue. I frequently have clients in crisis, frequently have clients hospitalized because of suicidal ideation or suicide attempts. I’ve lost a couple of clients to suicide. The level of need for intervention – proactive measures – is definitely there,” Murti said.

She noted that statistics provided by the Suicide Prevention Centre indicate that approximately 500 Albertans die each year from suicide, with 75 per cent of those being men between the ages of 30 to 69. Murti said that this doesn’t show the full picture since it doesn’t reflect suicide attempts and survivals, nor does it account for those who intentionally overdose on drugs as those are often deemed to be accidental.

It also doesn’t reflect figures on individuals who stay silent about their thoughts of suicide. Putting this issue out into the open is a major breakthrough. Murti and Imgrund both praise Jones for his willingness to put a face and a voice to this need.

“The difficulty in asking for help for anyone is a huge risk factor,” Imgrund said. “If more people would talk about their experiences in that courageous way, there would be less people in trouble and more people willing to ask for help.”

“A lot of this is about reducing the stigma, and the stigma associated with accessing supports and accessing help, speaking out and reducing shame,” Murti said.